We reached out to those goofy maroons 100 miles northeast of the state capital because they can agree with Texas fans on one thing: OU Sucks. This State of the Union was specially assigned to the fine folks at Good Bull Hunting.

And we totally regret this.

Share All sharing options for: 2013 Oklahoma Football Preview: Sooner State of the Union

Hey guys! First, a few words for Texas fans. How's it going? Have you had a chance to watch us dominate the SEC?

Let's have a quick chat about that little game in Dallas.

Now that your real rival has moved to a bigger and better conference, all Longhorns care about is beating OU. And times ain't great right now in that regard, are they? The lopsided box score tally from the last three years is on par with Generals Haig and Rawlinson reflecting back on their troops' performance at the Battle of the Somme. Basically, the French laid down. But not as bad as Mykkele Thompson and Adrian Phillips trying to tackle Trey Millard.

No matter what you're ranked in pre-season; no matter how many star players you have, all you really want is a win against the Sooners at the State Fair. Winning that game is a requirement for program stability. And I'm not sure exactly what the trouble is, other than the failure to effectively recruit RG3 or Johnny Football. So here is a blueprint for how you embarrass the ever living shit out of OU and believe me, that 77-0 taint-punching is still as fresh in our memories ten years later as your most recent 63-21 loss where you let their fullback jump more defenders than Mario on a coin binge. 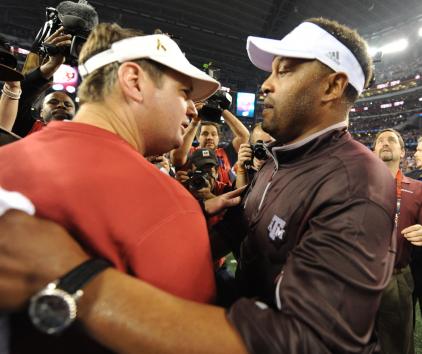 This is how it's supposed to look, Mack.

Get an offensive identity and stick with it

Quit switching around your scheme every year. You finally sent Greg Davis to Iowa, the perfect place for him to ground his left foot and pivot into eternity under the world's highest-paid underperformer. (what rhymes with 'Ferentz'?) Oklahoma has kept their machine humming at a high level with only minor tweaks over the past few years with Josh Huepel and Jay Norvell calling the shots. Okie State has had a 1,000 yard rusher and steady QB play for five seasons in a row. You don't need to keep shuffling staff or reinventing your offense every year; you just need to find what works,recruit to that scheme and maintain it. If it's so easy for Kevin Sumlin, why can't Big $$ Mack figure this out?

Not only does Johnny now have scoreboard on you in this, but OU has it TWICE OVER. Sam Bradford was great, but Jason White looks like an extra from the movie Scream and could be a character in a William Faulkner novel. Blake Bell ain't gonna win any hardware since he's not only the backup but also a Middle American poor man's version of Tim Tebow (overweight and ready to throw down or go fishin' at a moment's notice.) Damien Williams could be poised to take the offensive load at running back if the passing game for some reason falters under a QB starter with 115 career passing yards and 0 TDs in two years of backup duty. This might be a good year to force a turnover, which I am told helps win football games in the Big 12. We don't turn it over in the SEC.

You know what ... scratch that. Keep your grubby, Cheetoh-tinged fingers away from the Kevin. Mike Sherman is a pretty good OL coach though, if you can keep him awake.

The Aggies joining the SEC was like adding hot milk to cocoa. You should try it, really. It's that easy!

But enough about Texas, you guys will be fine. So what about the Sooners?

Well, it's been a fun off-season for Bob Stoops, especially early on. The Big Game Hunter has been extraordinarily petulant with the press and seems to have reached that middle-aged plateau of just not giving a shit what he says, which is almost pretty cool, until you realize that what he's saying is mostly stupid. Whatever, man, you just keep on Stoopsing until you find your way home.

Shameless self-promotion out of the way, let's see if there's a legitimate reason why our favorite mandible challenged dickhead is Stoopsing extra hard right now. OU lost three games last year, and all three were against teams with a Heisman finalist. 10-3 ain't that bad for most, but that ain't good enough for Barry Switzer or any of the shitty country singers showing off bleached tips on the OU sideline that count as Sooner celebrities. They wanted to DOMINATE in the new Big 12. They got past Baylor this year, but Bill Snyder pulled a purple piece of coal out of his ass, which fueled a big road game win and a Collin Klein Heisman candidacy. Notre Dame embarrassed them, and both of these happened at home. Gaylord stadium got pretty quiet. And we've covered the third loss.

So what's coming back? How's that Huepel-Norvell up tempo spread thingy going to click this year?

At quarterback, they are miserably, haplessly, screwed. Just look at Bill Connelly's experience chart. Blake Bell is the only QB on their roster who has attempted a pass in the two deep QB roster. Texas Tech has more faith in their QB situation right now. Bell has 115 yards in 2 years with no touchdowns. And he's almost attained Jared Lorentzen proportions this off-season. Is Trevor Knight the latest San Antonio-area RS Freshman phenom? Hold your breath. And exhale calmly. This Sooner O shouldn't scare you, but it will be serviceable. And if Paul Thompson can win a Big 12 ring, I guess anyone can.

In the backfield, there is woefully-underused fullback Trey Millard and a pretty solid duo of senior tailbacks in Damien Williams and Brennan Clay. WR should be solid with three dependable contributors back, including Jaz Reynolds who missed last season due to suspension. All they have to do is catch passes, which they are indeed good at. Sterling Shepard is a sneaky fucker in the Ryan Broyles mold. Finding someone to throw them might be more difficult.

Offensive line is a relative strength, depending on what kind of offense they manage to develop out of the meth blue sky. Led by team captain Gabe Ikard at center, the unit is pretty much all upperclassmen, so they'd better try to do something this year. Only 3 of 13 returning players are sophomores.

Hmmm. They're looking pretty screwed here. Definitely not up to Sooner standards.

The Brent Venables Hangover wasn't as pronounced or even as evident as one might have thought in 2012. Brother Mike stepped in and performed mostly admirably, the bowl game not withstanding (I'm going to drive this into the ground, folks). There were scares against potent offenses: Baylor, WVU, Oklahoma State in consecutive weeks was a hell of a test…but the Sooners managed to prevail against all three.

The defensive line: uh-oh. The good news for OU? Your top tackler on the front 4 is back. The bad news? He's the only one out of the top six DL tacklers returning. On a squad that was terrible enough as is in 2012, this probably isn't good.

Studies of Jamaican culture have shown that the practice of Daggering, where a man folds a young, nubile women up like a wheelbarrow and repeatedly slams his pelvis into hers while Reggaeton blares in the background through shitty speakers can help build one's confidence. So while Manny Diaz took a trip to help refugees in Africa, Bobby went to de islands, mon.

Is there anything Bob Stoops won't do to beat Mack Brown?

The linebacking squad is average at best for an OU team. The leader is unbelievably Corey Nelson, the dickhead that trolled Aggie fans by decommitting from A&M and switching to OU at the last minute in 2010. Of course Mike Sherman was too polite to say anything publicly but don't expect to see this guy get drafted by the Dolphins anytime soon because Sherman is a patient revenge artist as long as he stays awake.

So what does it all mean? Nothing at all. The relevance of this post is on par with Oklahoma's relevance as a state in this great union. But it was fun, and I appreciate Vasherized giving me the opportunity.

OU won't win the conference, of this I am sure. But if they beat Texas again ... oh man.

Sooner State of the Union Archive: