Johnny Manziel Loses Half a Game, NCAA Loses All Credibility

At this point, you just have to laugh.

Share All sharing options for: Johnny Manziel Loses Half a Game, NCAA Loses All Credibility

Per Billy Luicci (who I'll give a link to about 10, 15 seconds after Hell freezes over) and now ESPN, Texas A&M and the NCAAA have come to a decision on suspending Johnny Manziel.

In a ruling that demonstrated the seriousness with which the NCAA is willing to enforce its statutes, Manziel has been suspended for half of the 2013 season.

Correction, folks - Manziel has been suspended for half of the RICE GAME.

On behalf of...well, I guess on behalf of everyone everywhere - BUHHHH??????

This has to be the most laughable conceivable outcome to this saga, and a perfectly fitting death-knell for the NCAA as a credible institution.

Let's quickly recap some key statistics from l'affaire Hancock, shall we?

Number of items signed by Manziel for autograph brokers: 4500+, verified by eBay search and a wealth of other means

Number of people in the U.S. with an IQ over 80 who believe these items were signed with no knowledge on Manziel's part that they would be sold by said brokers: 0

Number of the NCAA bylaw that expressly forbids serial signing under those circumstances, EVEN IF NO MONEY CHANGED HANDS: 12.5.2.2

Set aside the issue of whether Manziel (or, in legalistic point of fact, Uncle Nate) actually received cash in hand for said signings. A brain-damaged child can figure out the answer to that one, but we have to allow for a certain degree of indolence, impotence and ineptitude when dealing with the NCAA. Unless Dan Wetzel hands them a smoking gun on a silver platter, they aren't going to rule with full force in matters of cash changing hands.

But there is zero - ZERO - doubt that 12.5.2.2. was broken. Or, more to the point, shattered into a a few thousand pieces (say, 4500 or so) by a guy with pure and utter contempt for the NCAA's authority. And congratulations, Johnny, because that was absolutely the proper attitude. A half-game suspension - which ACKNOWLEDGES the trampling of said bylaw while conceding that the NCAA lacks the ability to enforce it in any meaningful way - is downright Kafkaesque.

What do you think, Ser Barristan? Is it time to throw these pathetic, incompetent, corrupt, mealy-mouthed, limp-dicked cowards into the street and find some legitimate leadership for the sport? 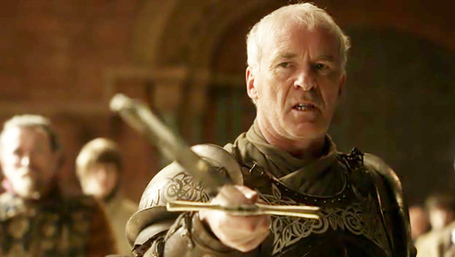 If you love something, its stewardship should be of tremendous importance to you. If you read this blog, it's probably because you love college football. And if there had been any lingering, flickering doubt that the NCAA was an utterly incompetent steward of the game we love, that doubt is hereby extinguished.

And then let's each do our own part to burn the NCAA to the ground.