From Hamilton to Clifton to China Spring to Dublin to Fairfield to Belton to Woodway to Hewitt to Hillsboro to Groesbeck to Palestine to Cleburne ... I've been everywhere, man. I'm a Baylor Bear, man!

Share All sharing options for: 2013 Baylor Football Preview: Bears State of the Union

Hey Campers! It is that time of the year again. State of the Unions are flowing like Artesian water over the Grand Coulee Dam and the wellspring of our hope resides on David Ash's right arm, Jordan Hick's hamstring, and Mack's strategeration. But, enough about those Longhorns of The Republic of Texas.

Baylor! The Kneeling Bear's (Baptist joke for our Aggie readers[sounders out?][hint: the ‘K' is silent]). Prediction: 8-5. Well, that was wholesome. See y'all next year . . . 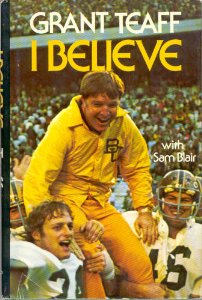 Okay, okay, these aren't your Daddy's Bears. Although a lot of Grant Teaff's teams beat Texas as well.

So what can we say about this year's Scrappy Ursidae that hasn't been said before? Not an effing thing. Offense good, defense bad, Briles unscrutable, QB prolific, whatever. Let's break this bad motha down fast and sweet like a Ramonce Taylor swisha sweet.

On offense the Bears are breaking in a new quarterback. New song sounds like the old song. Bryce Petty is a big son of a biscuit. That whippersnapper can really sling it around the yard (pure supposition). I predict video game numbers for Petty throwing to a fleet receiving corps, who will enjoy a lot of single coverage thanks to #25 in the backfield. I also predict sunrise and sunset daily.

Briles made a great free agent signing last summer with Lache Seastrunk. If the rumors are true that his price tag landed between of Ricky Seals-Jones (bad contract) and Cam Newton (steal) then Art got quite a deal. Seastrunk has already been honored by medicinal growers in NorCal and Sailor Ripley can confirm it is the #SuperStrunkyChronic. By season's end, I predict the NCAA will have named an unenforced rule after him. Lache and Glasco SmithKline Martin will get a metric shit ton of TDs on the way to enthusiastic team mediocrity. He will absolutely pants a Big Ten opponent in a bowl game. I mean knock their suspenders off. Fall, Winter, Spring, Summer ... the year matters not. This is the way in Waco. 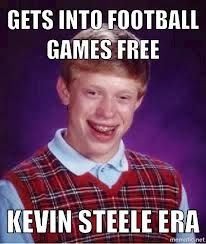 Tevin Reese is back and defensive backs don't like it. Briles' best defensive backs will be playing offense again in the form of Robbie Rhoads and Corey Coleman.  Phil Bennett says FML and spends an hour a day on his resume.  Texas fans will get to watch them through a haze of tears while they (RR and CC) secretly pine for the other team.  The burnt orange team. Not THAT team, sinners! That's what confessional is for, Robbie.

The offensive line can best be described as the guys Mac McWhorter should have recruited, starting with Cyril Richardson, the best guard in the Big 12. I'm glad the Horns traded Taylor Doyle straight up for Spencer Drango. That has really gone to plan so far. Taylor is the bane of metal detecting TAS agents and Spencer blocks football players. Easy choice, really. Thanks, Little Mac.

There are completely unsubstantiated rumors that Levi Norwood and Javonte Magee have left the team due to an ill advised skit where Levi was Robin Thicke and Javonte was Miley Cyrus. Ken Starr had no idea what was going on, but it was definitely dancing. Due to force of habit, he has subpeonaed Norwood’s dry cleaning.

On defense, Grandmaster Flash Phil Bennett presides over his usual collection of white safeties (or guys that run like white safeties) that couldn't play tight end for Briles. Ball carriers pass through this defense like rice through a goose. MLB Bryce Hager is back for another year of utter confusion, triple digit tackles, and Longhorn Legacy Lament. But seriously, I don't care if the total is 186 -- take the over. Sweating an under total on a Baylor game should be illegal. It is illegal in 48 states you say? More illegal.

Cornerbacks Joe Williams and Demetri Woodson returned for their senior year because nobody looks forward to selling insurance. It'll be a dead heat whether they give up more touchdowns than Bryce Petty throws. They have two senior defensive ends so no chance for improvement there. The two sophomore interior guys learned their back pedal from the other guys they had before. So, they got that going for them, which is nice (read in Spackler). Their best defensive strategy is to alternate which unit gives up the yards so the other can rest. Heat stroke and exhaustion are real. Baylor gave up 37 points per game last year. I know this because I put it in a spreadsheet and hit the right buttons.

Let's look at the schedule, dudes. (Losses in Bold)

A quick perusal of the Baylor Bears 2013 Football Media Almanac shows me that Beau Trahan still has no neck and I am all out of fucks to give for Baylor Football. Art Briles is a damn good coach so I give them 8-5 again, even though I look at the schedule and see 6-6. 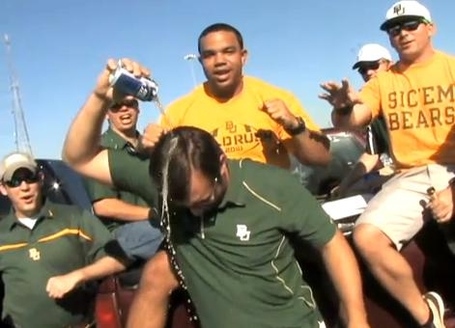 Rinse away thy sins!

h/t to @InsideTexasEric and the IT boys for furnishing factual research and moral support.

Baylor State of the Union Archive: