Climb aboard this coal train and get ready for a bumpy ride.

About halfway through last season, all things were humming for the Mountaineers. Dana Holgorsen's WunderSpread offense was in full throttle, powered by senior Heisman candidate QB Geno Smith and WRs Tavon Austin and Stedman Bailey.

Even though the local media in Morgantown still werent sure how to even spell Holgo's last name, he looked damn good on the sidelines and them box scores kept fillin' up on the right side. 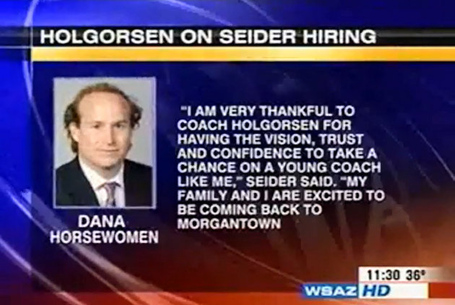 No worries, it happens.

Townfolk had a little extra hop in their step. Mullets were freshly trimmed. Long neglected rusty stills were being shined up for the forthcoming winter batch. Traffic cams revealed fleets of jacked up Ford Broncos and International Scouts driving at a measured pace, respecting a safe distance from fellow citizens, yielding whenever the chance arose. Couches sat undisturbed on lawns, knowing their time would soon come to light up the Morgantown sky, but that time was not now. There was even something beautiful about a decaying coal factory, it's sooted shadow holding up a Blueridge mountain sky.

Change comes quickly when Dana Holgorsen is your head coach and it's always change for the better.

Late September, and the Mountaineers were coming off a big win against Maryland, gaining momentum for its first Big 12 conference game. Two of the top offenses in the nation clashed and everyone sat back and watched the fireworks. Especially the defenses. It was the perfect game for homecoming as Geno Smith vaulted up the Heisman charts, throwing for 656 yards and 7 TDs, 5 of those to Stedman Bailey, who racked up 303 yards. But he wasn't even the leading receiver in the game -- Terrance Williams went for 314 yards on 17 catches. Of the combined 19 TDs between the two schools, 16 took 3 minutes or less. Record books were rewritten. Pundits asked, "is this the best college offense we've ever seen?"

Never before had a team given up 63 points and still won. 70 did the job and that was all that mattered. Across the country, Mike Leach nodded his head in approval at his young protege's offensive mind and complete disdain for defense. And nobody complained the next week (except Texas fans), when the Mountaineers came home from Austin with a thrilling 48-45 win.

Mountaineers football was back, baby.

WVU's 2012 defense has received such preseason votes of confidence as:

"...slightly less gay than a tastefully prepared picnic lunch in a bicycle basket."

"Playing on the WVU defense would be a marginal quality of life upgrade for a Burmese sex slave worker freed from a shipping container."

Turns out this was a generous assessment. Things were actually far worse, and it would all unravel quickly on a trip to Lubbock (a sign announces this as you approach town, unfortunately they flew). They were not the first to enter Lubbock living but leave as a soulless, disease-ridden carcass. If you ever dated a girl from the western plains, you know the feeling. Geno only completed 50% of his passes, for a total of under 300 yards, and Bailey got hurt. The final tally was 49-14 but it looked worse, like any Kansas State win over Texas in recent memory.

On the flight home, Holgo stared out the window, sipping a bourbon neat (and another), scrolling through his playlist looking for the right song to help sooth the pain.

It seemed like the perfect track: Norman Blake's "Last Train from Poor Valley". Verse by verse the whisky warmed his cheeks and numbed his heart. He wondered how a song written decades ago could so accurately tell the tale of his 2013 Mountaineers -- from boom times then derailment to the final unraveling. But he couldn't hit pause or turn it off. It was beyond eery. It was downright Mountaineery. On and and it went in a loop, and he was forced to accept that higher powers were at play. Maybe he really was Dana Horsewoman, a dreamcoacher whose fate had just taken a very bad turn for the worse?

Well it was good one time everything was mighty fine (Helllooo ladies of Austin!)

But things they got slow for no reason that I know (oh you know, alright ...)

The mines all closed down everybody laid around(good time to recruit defense!)

And woman I could see it killin' you (hey, when I left the casino, she was still breathing!) 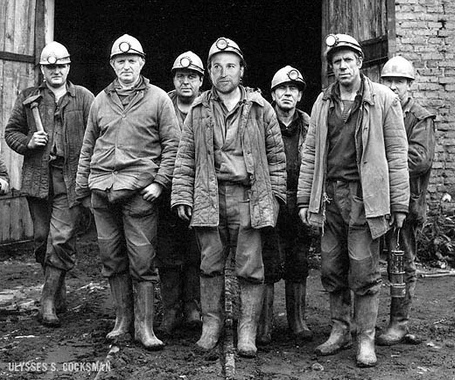 Leavin' crossed your mind every day (Akron called, they're interested)

Well I should blame you now but I never could somehow (Thanks a lot, Big 12)

It wasn't what you thought, just some dreams that you'd bought (Geno's Heisman campaign) 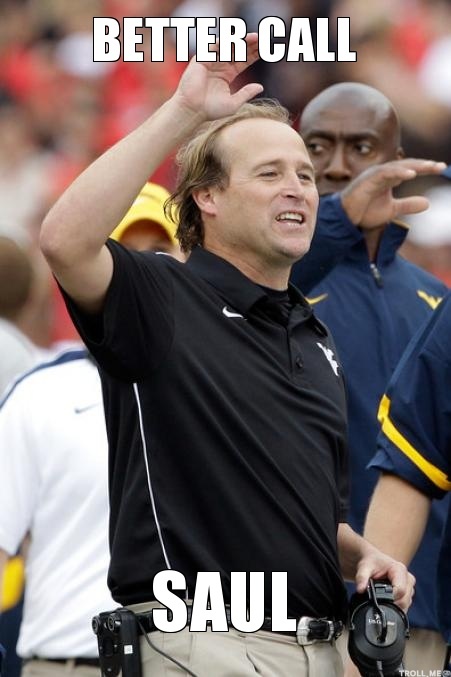 Holgo spent a long offseason in contemplation. Mainly at casinos. There's a lot of down time while the dealer is reshuffling. Mainly, he was scared to look at the depleted depth chart that awaited him. He really liked the idea of Karl Joseph coming back as a bigger, stronger sophomore and anchoring what should be a more experienced secondary with junior DBs Travis Bell and Ishmael Banks back, hopefully stronger and wiser. But everywhere other than Running Back he had some glaring holes to fill.

The defense lost five starters. That's the good news. The 2012 unit ranked 115th (out of 120 teams), gave up 40 PPG seven times, opponents averaged 38 PPG, and WVU kindly allowed 10 yards per pass. That's a goddamn first down every time someone threw the ball. So why even run it? Because that was really easy, too, as the Mountaineer D allowed 23 TDs on the ground and 160 yds per game. DEs chasing down quarterbacks in November just arrived yesterday.

Returning on the DL are senior DE Will Clarke and NG Shaq Rowell. Soph NG Christian Brown is a solid backup to Rowell and they will try to improve up on that 1.7 sack per game average.

Dontrill Hyman is the likely starter at DE opposite Clarke, along with Soph Eric Kinsey who started 12 games as a true frosh. Noble Nwachukwu will actively work to stop the run and build his family a small hut in opponents' backfields. RS Soph Kyle Rose is also on the roster.

Holgo has to replace one of the top offenses in the nation (502 ypg), which was 5th in passing efficiency. The best stat? Smith only threw 7 picks in 537 attempts for a 70% completion (4300 yards and 44 TDs.) And this team went 7-5. Yeah. Tasked with this inside out remodel are junior QBs Clint Trickett (brother-cousin to Dick Trickle?) and Paul Millard.

They lost three senior interior OL in Center Joe Madsen, LG Jeff Braun, and RG Josh Jenkins, who combined for 126 career starts. There are 10 guys in the rotation, most of them young but there’s some talent. Biggest reason for promise was hiring Stanford’s TE and OT coach Ron Crook to coach the OL. The big man at left OT is Quinton "have you ever been to?" Spain. Projected center Pat Eger, who played guard and tackle last year, missed time in camp with an ankle injury, leaving an opening for RS Frosh Tyler Orlosky at center, who slides over from guard. The starting guards are both big Marks’s, 6'5", 305 JUCO transfer Mark Glowinski and 6'4", 310 Marquise Lucas.

Stone Underwood deserves mention for name alone and also because he broke his hand in a game in high school and snapped with his other hand rather than coming out of the game. Not too smart, which is why he likely went JUCO on his long and windy road to Morgantown. You have fans in Austin, Stone Underwood! Hopefully 6’10"-317 lb walk on OT Mike Calicchio gets some PT just to see what Musburger will say about the giant fella. Former OL coach Bill Bedenbaugh left for OU, the ‘eers first opponent. Catching the Sooners early in the season is key, esp with Notre Dame looming large in week 2 for OU. Catch them looking ahead and win an ugly 23-20 game, please.

Soph Jordan Thompson, JUCO Mario Alford, RS frosh Devonte Mathis and true frosh Daikiel Shorts are the inside receivers, but their best options are on the edge with 6'2" Ivan McCartney, JUCO transfer Kevin White, and Soph K.J. Myers. If they can all combine to catch as many balls as either Stedman or Bailey did, it would be a surprise. Holgo may move RB Cody Clay into the WR mix if headsets start flying again from poorly run routes and dropped balls.

The deepest unit on the team, WVU's backfield took a hit when Andrew Buie left the team this week. Also gone is bruiser Shawne Alston (97-416-12 TDs). In poll position and primed for a big season as the Big 12's newcomer of the year is UH transfer Charles Sims. Backing him up is returning speedster Dustin Garrison. In only 9 games, the 5’11", 217 lb. Sims rushed for 900 yards and caught 37 balls for another 400 yards. Rounding out the stable is the dynamic duo of Wendell Smallwood and Dreamius Smith. Dreamius went JUCO after his FBS dreams didn’t come true and was the #2 JUCO recruit last year. Smallwood’s nickname is Bigwood and I’m just going to leave that one alone. Your boss knows you’re reading about football, no reason to make it more obvious by eliciting laughs from dick jokes. Anyway, the guy is patient in letting his blocks develop and apparently has a really huge dick. After a redshirt year, it should only get bigger and more productive. I CAN HEAR YOU SUZY IN ACCOUNTING! STOP BLUSHING ITS SO OBVIOUS YOU’RE READING A BARKING CARNIVAL STATE OF THE UNION AND GETTING MOIST.

So what does it all mean, Holgo?

The Mountaineers will need a productive running game to take pressure off their ripe QBs. With a young OL, it may take a few games to get clicking but there is plenty of size and talent to mine. Once they gel this could be the core of a very good offense in another year or two. It's Holgo. Horsewoman never stay down long. Unless you drown her him herm. There is no path through water to the Happy Hunting Ground. The Holgo Air Raid may be grounded by a more conservative but effective, clock-chewing (OH SUZY STOP IT) approach. In the end, unless the defense steps up its game (and yes, things can get worse, just ask Baylor), Holgo will be back on that last train to poor valley with a one way ticket, bangin' a slightly lesser class of divorcees in every town until another job comes callin'.

But after watching this video about how the students of West Virginia rally around their school, team, and friends with that adventurous Mountaineer spirit, I'm really not worried at all. This five minute clip tells the past, present, and future of Morgantown much like Norman Blake did decades ago. Times have changed slightly, however. Particularly on St. Patrick's Day. And any school that can party like this will be juuuuust fine in the end.

And that's a wrap on 2013 SOTUs. Thanks for participating in the Barking Carnival experience. Let the games begin.