On the surface, Iowa screens as a pretty benign state.  It's flat, so it is very rare to meet an Iowan with a set of intimidating calves (big plus in my book).  The state is famous for corn, which is what Fritos are made of, so that's pretty cool. Unfortunately it's also a key component in corn syrup. They're also into wrestling, but it's not the Vince McMahon kind, so that's a little weird. How did Greco-Romans end up in the heartlands?

Cyclone fans have always been the perfect representation of Iowa in my book.  Norm and Martha, the names of every married Cyclone couple, all seem like relatively good people. Most importantly, their team has been most generous to the Longhorns even when we didn't deserve the win. Perhaps you can teach some midwestern graciousness to Bob Stoops? Geez. And Paul Rhoads seems to be the perfect hybrid of Craig T. Nelson and John Walton.

Iowa and its land-grant university seemed alright in my book, but then I decided to dig in a little deeper, and what I found was truly shocking. 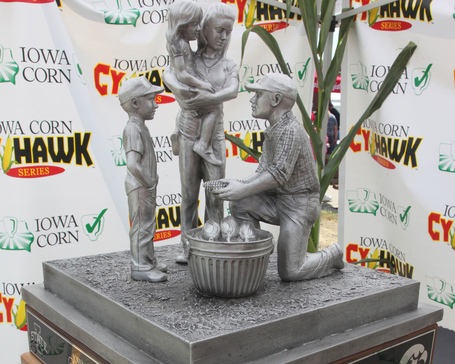 You see, all these years, the state of Iowa has been pulling the wool over the eyes of the rest of the nation and has been slowly evolving into an evil regime that is attempting to outlaw every single good part of the American lifestyle.  Ever wonder why you should protest the Iowa Caucus and the amount of weight it carries in our national elections?  Well, you should because Iowans want to bring the following laws to the national arena:

As a red-blooded Texan, I hope reading these Iowan laws results in a guttural rage welling up inside you that causes you to go idle your car in the drive-way to burn some Ethanol-free oil, smoke a Marlboro Red and stare angrily to the north, glaring right by Oklahoma, Kansas, and the eastern tip of Nebraska, right into the heart of Ames, Iowa, your new least favorite Big XII school.  I'm no longer so proud of Paul Rhoads; I'm merely embarrassed that I fell for his façade.  Not again, not ever.

So with that being said, how do the Cyclones of Ames stack up this year and should we be afraid of playing in Ames on a Thursday night?

The Cyclones have made a recent tradition out of playing at least 5 guys at QB in a season each year since 2009, but Sam Richardson is apparently now "the man" in Ames despite a pretty lousy performance in last year's Liberty Bowl. He has leadership qualities that local firemen admire. Rhoads has a large stable of running backs at his disposal this year with Shontrelle Johnson, James White and Jeff Woody having all earned carries last year and JUCO transfer Aaron Wimberly apparently pushing for playing time.  The returning RBs aren't necessarily world beaters, but they move well in the open field and will gladly spring 60 yards gains if the Horns decide to be terrible about policing gaps again.  The offensive line is relatively experienced, big, and I'm assuming at least three of them play football because they got embarrassed wearing singlets during high school wrestling.  The receiving corps is young, inexperienced, and hate mono-limbed musicians.

Paul Rhoads is an exceptional bend-but-don't-break defensive coach, but losses in the Front 7 could results in few more cracks this year than in the past.  Gone are all-around solid LBs A.J. Klein and Jake Knott, who will be replaced by no one you have ever heard of.  ISU fans are very worried about this.  Fortunately, the noobs will be protected by Walter Woods III and Brandon Jensen, two 300+Lb 1-Techs who are good at eating up both space and high-fructose corn syrup.  That being said, the big boys have problems with lateral movement, so most opponents will have success working the edges and a little misdirection probably wouldn't hurt against the inexperienced LBs.  Where the Clones do have experience is in the secondary where they return 4 starters.

Kirby Van Der Kamp is the best punter in the Big XII, possibly the best in college football.  He beat the Longhorns in 2010 with a 70+ yard punt that pinned the Horns on the goal line.  He did it once and he'll do it again.  He's not sorry.

Paul Rhoads has done an exceptional job rebuilding the Cyclones from the ashes of the barn fire with which Chizik left him, but this team is very young with little experience at critical positions.  In theory, the game in Ames should be the perfect Big XII opener for the Horns as we catch a young team early in the season and will have 9 days to get really, really tight about playing OU.  Iowa State will beat someone they shouldn't this year, but 6-6 seems like a fairly safe bet for their overall record in 2013.

It will all likely end in another close loss to a fifth place Big 10 team in the Pinstripe Bowl.

OK, I'm now going to feed my horse a fire hydrant because this is America.

Cyclone State of the Union Archive: