Week 1 of the 2013 College Football season is in the books and based on that small sample of data, Oklahoma and Texas have swapped spots in the first Coaches Poll. That's just fine. Mack Brown prefers to be the underdog, even when he has the better team.

Clemson moves up, Georgia pulls a Clemson, Kansas State and Oregon State get tossed into the Others Receiving Votes trash pile, and Baylor is still just happy to be mentioned anytime anywhere about anything.

The Longhorns set a school record 715 yards of offense, despite only playing 33 minutes of a 60 minute football game. Most of the first half was a turnover clinic sponsored by Time Warner and Taco Bell that had been pre-arranged since July. Disregard and fast forward to the 2:50 mark in the first half for the actual beginning of the game, which is also when most fans went fleeing to the Alumni Center for Bourbon and Beer in any order, taken down fast in large quantities. Two loud booms could be heard back-to-back just before halftime thanks to David Ash connecting with John Harris and Daje Johnson in timely, 'splosive fashion.

A few positives emerged from the rubble after halftime, notably the arrival of Desmond Harrison and his ability to bearpaw DEs and LBs with relative ease, Jalen Overstreet running over third string safeties from Las Cruces on two unscheduled trips to the endzone, and Mike Davis completing his weekly cycle of sin/sacrifice/atonement with a magical 4th quarter TD grab. The new Up Tempo offense only cranked out 72 plays thanks to three first half turnovers, which limited to only 29 plays. That average needs to be in the 80s.

Next up: A trip to Provo against 0-1 BYU, who lost 19-16 in a monsoon to one of the worst teams in the ACC. Lay the points and be sure to unseat a mormon bike messenger this week.

The Sooners did all their damage against Lousiana-Monroe in the second and third quarter, beating ULM 34-0. Trevor Knight ran for 103 yards on 13 carries, but it was the three TD passes (two to Jalen Saunders) that had to please Bob Stoops. Impossible. Bob Stoops can never be pleased and cited Knight's first half state line of 7/21 for 42 yards as evidence. 305 of the 450 yards of offense came on the ground and Knight only completed 42% of his passes. NOT BALANCED. The defense had been under some pre-season scrutiny for lacking the typical talent and depth you'd see on an OU D, but still managed to pitch a shut out. Time of possession was nearly equal and the Sooners punted seven times. I love stats that Bob Stoops hates.

If you're sensing a theme here, all of the Big 12's top teams started slowly, except Baylor, but that's beacuse they played Wofford who is essentially a High School. Gundy pulled the ripcord on Clint Chelf early, prompting said QBs bro to get awesome real-time revenge on Twitter: 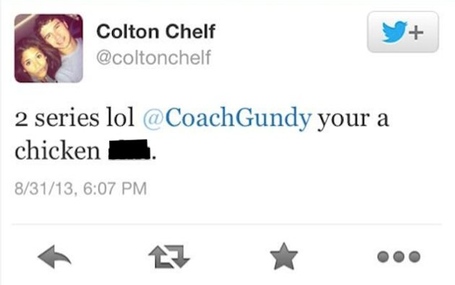 Well done, Colton. Instant follow! The Cowboys limped through this one, pulling out a 21-3 win over one of the SEC's lower tier teams. But on a weekend where the Big 12 did not impress, we'll take it. J.W. Walsh only passed for 125 with 0/0 , but ran for 125 and a TD, seizing early control of the Cowboys QB job. OSU's consistent play at RB continues with Jeremy Smith, who went for 102 yards and 2 TDs on 15 carries. For eight years in a row now, I am reminded that we really should have recruited Justin Gilbert harder.

Next up: A roadbump tilt against the UTSA Roadrunners at the Alamodome as OSU's Texas recruiting tour continues.

The Horned Frogs lost to a solid LSU squad, 37-27, but the box score told a different tale. Cam Cameron's debut as Tigers OC went well as LSU outgained the TCU offense by 200 yards (450 to 250). The Horned Frogs got a 100 yd kickoff return from RB Donald Catalon to keep them in the game in the second half before Jarvis Landry hauled in a TD pass to ice the game in the 4th quarter. TCU's OL only allowed one sack against a stout Tiger DL but the Horned Frog front 7 couldn't get any pressure on QB Zach Mettenberger as suspended stud DL watched from the sidelines.

Next up: The battle against non-native furry predators from the Bayou continues against something called Southeastern Louisiana Lions.

Some might be impressed by Baylor's 69-0 drubbing of Wofford. This is the most points Baylor has scored in a game since 1929, Seastrunk went for over 100 yards with 2 TDs on only 11 carries, and the next white RG3 -- QB Bryce Petty -- threw for 290 and a score. That's all well and good until you account for the opponent. New Mexico would be favored against Wofford by 3 TDs. Accepting this as fact, more discerning viewers should be worried that Wofford held the ball for 35 minutes to Baylor's 25. Sure, they score fast, but Wofford also rushed for 174 yards. Early chinks in the spiritual armor of a faith-based defense? YOU BETTER BELIEVE IT.

Next up: Something you should nto believe in? Baylor's non-conference schedule. Wofford -> Buffalo -> LA-Monroe.

Already addressed above and not worthy of any more keystrokes.

Next up: OU, who may be looking ahead to a week 3 clash with Notre Dame, but will still bend over WVU behind the grist mill without making eye contact and cover the twenty point five. Start drinking earlier than usual this season, Coach Horsewoman.

Right on schedule, Sigh-clones. The 2013 season got off to a rough start with a close loss to in-state powerhouse, Northern Iowa. Not to be confused with Northeastern Iowa. I would tell you what happened if there were any record of it from a spectator in attendance or on the Internet other than this second hand account from a chick that blew a .341 after trying to have sex with the field turf. News finally trickled out from the NSA that Iowa State lost and that's all you need to know about their hopes for this season -- drowned in a vat of Karo corn syrup five games ahead of schedule.

True Freshman Baker Mayfield had to stand in for the injured Michael Brewer, and all he did was throw for 400 yards, 4 TDs, and become the first Tech freshman to win Big 12 Offensive Player of the Week since ... Kliff Kingsbury in 1999. Now that's coaching. The Red Raiders won 42-23 after pulling away with 21 unanswered in the 4th quarter but it was a little closer than Tech fans in town visiting Ft Worth with the sole intent of plowing SMU co-eds would have liked. Garrett Gilbert accounted for 441 yards, most of those for his own team. The best WR in the conference, Eric Ward, did not disappoint with 150 yards and TD on 13 receptions. 11 different Tech receivers caught a pass.

Next Up: Stephen F Austin. Mayfield should break his week old record and pick up some more hardware. Then lose his job to Brewer in week 3, never to play again.

Those poor bastards. I watched every second of this game and the Mildcats got fully North Dakotered from whistle to whistle. Terrible for the Big 12 but totally awesome for Texas fans. How is it that a team who has beaten the Longhorns five times in a row in every fashion possible can lose a home opener to North Fucking Dakota State? Is this some strange sign that the curse has been lifted? Don't count on it. Snyder won't sleep for weeks until purple cans of whoop ass are rightfully enjoyed again in Manhattan.

Saving the best for last, the Jayhawks are undefeated after week 1, winning a close match against a feisty bye week. It only gets worse from here, Charlie.

Next up: South Dakota -- the state that owns Kansas. Loss. And the Big 12's stock plummets even further.

Is it too late to accept a Pac 12 invite?