I'm starting to feel like emo-mack following this team with its treacherous highs and demoralizing lows.

Since A&T doesn't offer the Longhorn Network in their U200 package in Michigan, it was some time before I got to take in our contest with the New Mexico St Aggies. Until I had done so, my understanding of our contest with the other Aggies was informed by constantly cutting-out gamecast updates and bi-polar tweets from other Longhorn fans and writers.

Like the rest of you, I'm at the point with this program where I face two different options for how I handle my relationship to Texas football. I can embrace stoicism and quote Marcus Aurelius at myself while mulling over the upcoming OU game to morning coffee...

You have power over your mind - not outside events. Realize this, and you will find strength.

...or embrace the emo-Mack inside by starting the day in a secretive place weeping to Paramore while clutching my Rose Bowl DVD's. 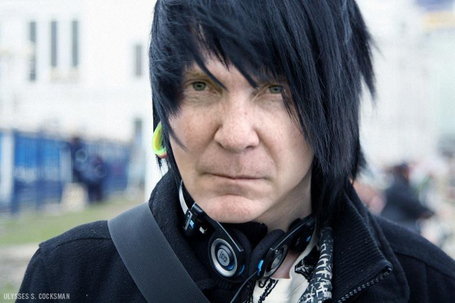 Well I'm not weeping to my wife's music anymore, I'm opting for the stoic route that leaves me unmoved by either the 0-7 openings to games against teams that should be competing at a sub-FBS level or the 715 yard explosions that can also occur against said creampuffs.

While pondering the tape with courage and ambivalence, I found the following:

The New Mexico St gameplan was very predictable, they looked to pack the trenches and attack between the tackles with stunts and take their chances against Ash and the pass game. Ash's 414 total yards and 343 passing yards testify to the risks of this approach...for New Mexico St. It remains to be seen what happens against opponents that can commit fewer and fewer resources to stop the run.

Texas' gameplan was pretty much "run the base offense regardless and look for teachable moments and carry-over into next week." However, that meant we got a nice peek into what Applewhite has in store for the year, which is almost exciting enough to draw the inner emo-Mack out of his hiding place in his parent's basement.

Unfortunately, this offense really hums when David Ash moves around and makes things happen with his feet. This is unfortunate only in that da derp de derp is the main feature in the event that the David Ash show is ever cancelled due to injury. As a general plan for building an offense, it leads to some exciting possibilities.

Now as Scipio noted, there's no way his long TD run goes much further than 5-10 yards against BYU or the better Big 12 defenses, however Ash's change of direction and top end speed are decisively above average.

Less decisive are some of his choices in the pass game. Ash occasionally makes reads and throws with the caution of a homeschooler crossing the street combined with the awareness of a Tech grad listening in on a conversation about Aeschylus. His interception in the end zone should have been a touchdown had he noted the safety and added a tad more zip. His later, double-pump-faked TD could have been picked or lost against a quicker opponent observing his decision unfold.

All that said, Ash has the ability to throw with fantastic touch and accuracy outside of the hash marks and up the seams, which makes this offense very dangerous. Applewhite has installed a large variety of Greg Davis-esque spread concepts in which three or four receivers run a vertical stem before making simultaneous breaks based on the coverage.

There's a learning curve in running and reading these routes and a certain degree of trust required from teammates to fully maximize the possibilities in the middle of the field ala Colt-to-Shipley 2008-09, but it's good stuff.

Much like with Colt, these plays reach another level when you have a QB and receivers who are totally in sync (still getting there) and a mobile QB who can buy time in four-WR sets to find people downfield (check).

I'm very happy with where we are here currently.

Jaxon Shipley is perfect for the kind of route-tree flexibility described above and he's also really improved his blocking, which makes the run and screen game far more viable.

John Harris grab that ignited the Texas offense was very exciting but closer examination reveals horrendous fundamentals from the other Aggie defense:

The safety is positioned as though he expects the receivers to be funneled inside but the corner gives Harris a free outside release and the safety is nowhere near close enough to contest the pass. Harris does a great job of abusing them for this mistake, but it'll be interesting to see what happens when he's matched by a competent or remotely quick secondary.

Mike Davis put on the kind of routine we've come to know the last three years. Occasional brilliance mixed with occasional disaster. He reminds me a great deal of Chykie Brown.

Texas Inside Zone run game was nearly useless most of the night save for drawing attention away from other features of the offense except when complemented by the threat of an Ash keeper in the Zone Read, or at the end of the game against a tired defense with Bergeron and Overstreet.

So this offensive line is still struggling mightily to blow open interior lanes against...well, anyone really. Texas didn't run a great deal of Power-O so I'm not sure exactly where we are in regards to that concept.

However, Texas' OL have strengths both individually and collectively. They are athletic and they are now experienced. They built a stone wall for Texas' vertical pass game and easily handled all of the other Aggies' stunts and blitzes, they got out in space to block on the RB and Tunnel screens that will be so valuable for Texas this year with Daje and co in the backfield, and they block very well on outside zone:

When presented with the assignment to reach DL or LB's at the 2nd level, this group excels where Greg Davis' crew floundered. While Outside Zone doesn't attack the middle of the field like Inside Zone or Power-O and offer the same balance with the outside pass game, it can still play an important and useful role for this offense.

Wait for the inevitable Outside Zone calls paired with bootleg or packaged screen calls. They're coming, and they'll be magnificent.

We don't have the OL we want to really get this thing going, but we do have one of the best OL's we've had in many years and a group that's very similar to what OU featured in the Landry Jones era.

I wasn't ready to make much of Overstreet's late heroics until I watched them, and I was very impressed with his vision and grasp of the "cut'n'go" zone run game philosophy. Our backfield is loaded but I believe he can contribute here if the guys ahead of him are dinged up or when they graduate...or if they fail to please us.

Bergeron is a monster in the run game against worn down and helpless opponents and has great value in that hammering role. His cuts on Inside Zone were also fairly inspired. Brown and Gray didn't have many opportunities to find a lot of daylight early but they have great potential if we can keep the passing game growing well enough to draw more attention away from the interior. Both did a good job getting positive yardage on their runs.

Daje Johnson is arguably the best player on this team, getting him touches is essential to achieving the kind of season we've been waiting for.

In general, we've mostly gone back to the philosophy of 2011, which is a tremendous relief. By that, I mean that our schemes and approach are geared around playing "bend don't break" Palms/Quarters defense mixed with extremely liberal usage of Fire Zones which are our drive-killers. It's a great approach to defensive football and obviously had considerable success in 2011. New Mexico St. could not handle it, I honestly doubt that BYU will do much better.

The game was won here. Cedric Reed has grown into a more than worthy replacement of Alex Okafor. He has a similar impact in the passing game and might be even more physical against the run. On the following clip you get a great sense of what Texas run defense should look like:

Malcom Brown is getting penetration while Jeffcoat prevents the playside B gap from being blown open. On the backside, Whaley stays in the A-gap and keeps Hicks entirely free while Reed blows up the whole play from the backside.

Our DT's completely controlled this game and thoroughly dominated New Mexico St...as it should be.

For the most part, their job was very easy since the DT's kept them clean and free to read plays. On the encouraging side, Hicks picked up where left off, Jinkens flashed his usual athleticism, and Santos did this:

We mixed in some of our Cover-1 material towards the end of the game which serves as a useful change of pace although I still protest it's usage as a main philosophy to defensing Big 12 passing games. Santos manages to leverage himself well against the inside break and then destroys the attempt to hit the slot going back outside.

Overall, Santos played both decisively and intelligently. You hear him described as a wild man but the key to looking aggressive and great as a linebacker is actually processing information quickly and responding even faster. We saw that from Mr. Santos last Saturday night, which puts Mr. Edmond's job status in question.

Diggs' experience is mitigated somewhat by playing in the nickel rather than outside at corner but his skills play well there, where his fantastic short area quickness is useful against the run and quick passing game.

Adrian Phillips' day was a mixed bag as he missed some tackles, made a few good tackles, and picked up an interception playing Hot 2 in a Fire Zone. I don't see anyone coming up to take his spot anytime soon so we'd better get used to it. He could be the 2013 version of Blake Gideon circa 2011, which would NOT be a terrible thing for this defense.

Manny Diaz has simplified our approach back to a more conservative approach to base defense combined with his trademark Fire Zones while Applewhite has demonstrated both vision for the future (wide open pass game with pounding, between the tackles run attack) as well as the ability to put the players we currently have in position to be maximized, such as Daje Johnson.

Just don't let the internal emo-Mack out just yet though, let's see what we make of BYU's defense up in the elevation at Provo first.