Durant is on a tear rarely seen in NBA history.

The Oklahoma City Thunder sit at 33-10 atop the Western conference standings despite All-NBA point guard Russell Westbrook missing over one third of the Thunder's games with knee complications. Westbrook is expected back after the All-Star break, but his absence has put the spotlight squarely and solely on a player who, along with Lebron James, exists in a place so clearly beyond his NBA peers that the numbers, as overwhelming as they are, can't adequately convey how much he's carrying his team and singlehandedly willing them over the NBA's best night after night.  You have to see it to appreciate it.

Expand this clip from 1:23 to several hours and the footage doesn't look much different:

Ridiculous.  Those aren't his game highlights - those were OKC's last 11 points in the game.

The 6-10 Durant is essentially playing point forward for long stretches during crunch time when he's not putting in minutes as a stretch 4, a shooting guard running off of screens and running a one man fast break.  He's destroying double teams, creating for teammates, and repeatedly scoring at will against the NBA's best individual defenders and trapping defenses singly designed to get the ball out of his hands.

Durant is averaging over 37 points per game in the month of January with nine consecutive games over 30 with eye-popping efficiency numbers and good defense.  These aren't great numbers.  They're historic.

The deeper dive beyond his league leading scoring is just as impressive.  In a league of 400-450 active players, Durant is ranked:

There is no meaningful single area of statistical measurement in which Durant is not a top 5% or top 10% player. The lazy notion that "Durant is just an elite scorer" isn't just wrong - it's opinion malpractice.

Expressed another way: PER 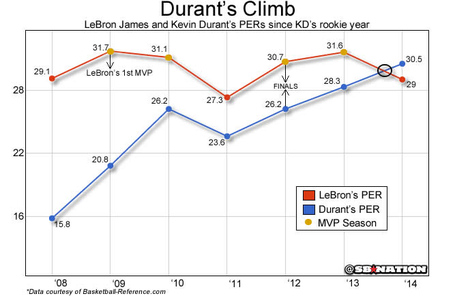 If you're not watching Durant right now, you're missing out on one of the most spectacular runs in sports history.