Welcome to Texas, Charlie. Mind if I show you around?

Helping you learn the Longhorn landscape.

Share All sharing options for: Welcome to Texas, Charlie. Mind if I show you around?

The Eyes of Texas are upon you. If you're good enough, you'll have the attention of the entire nation.

This is the flagship public school in the nation's second most populous state that exports more goods than California and New York combined; a Top 15 world economy were it its own country.

Which it imagines itself to be.

College football is king.  You're no longer at a basketball school fighting for ink in a minor conference against the other in-state sentimental favorite.  You will face an adjustment, even though you've coached in big-time environments before

This isn't the South, it's not the West, it's not the Great Plains, and it's not a northern territory of Mexico.  Though it is all of those things.  Texas is an iconic state.  If you travel enough overseas, you realize that foreigners have a conception of three places in the United States - a hundred blocks of New York City; California - because that's where Baywatch happened; Texas, because they love its mythology. Blame Dallas, Lonesome Dove, Giant, True Grit, No Country For Old Men and Hud.  And everyone has a cousin who lives in Houston.

Texans are defined by friendliness sprinkled with bewildered resentment and the simultaneous embrace of a shifting culture imposed by immigration from other states, countries, and the impositions of American monoculture. Our unreasonable love for our state - or more specifically, our state of mind -  is usually more amusing and endearing than arrogant.  Usually.

Welcome to the small overlapping Venn Diagram of college fans who are passionate about athletics, academics, are successful and prosperous, and generally have a good sense of humor about our own insanity while not relenting on it a bit.  We operate with the general presumption that the opposing team should forfeit the game to save us the trouble of playing it.  Understandably, our opponents find this irritating.

You might have heard we have some billionaires.  And lots of multi-millionaires.  Most of them are great people who do a lot for Texas.  A few jock sniffers will attempt to ingratiate themselves to you so that they can brag to their friends that you're their mascot and they are your coaching muse. Something tells me you're not that guy.  Like vampires, they cannot walk past the threshold into your home unless you invite them in.  Once you do invite them in, you're at their mercy.

Our rich guys don't meddle constantly.  If you start to lose and the administration is too gutless to do anything about it, they will intervene.  But that problem started with your performance and your bosses refusing to impose accountability.  It's not a constant problem as its currently portrayed.

You can't cheat here and you don't have to.  Your players should be monsters on the field, model citizens off of it, and spend all of their free time in the library or weight room.  This despite the fact that most of us were legitimate threats to law and order at the same age and all Texans love hell-raisers.  It's a hypocrisy.  Just do your best and have the interest of your players and the program at heart and we'll muddle through just fine.

Our love is not unconditional, though we can grow to love you.  Focus on winning our respect first.

We print money for the University.  Look around in the couch cushions of your new office.  You'll probably find a few hundred thousand here and there.  Keep it.  It's yours.  We're handing you a blank check.  If you use it to hire mediocrities or stubbornly retain underachievers or cronies, this will end badly.

Some of your assistant coaches - the same staff that brought Louisville into its halcyon days, the guys you love and would kill for - won't be good enough here.  That's the hard reality.  Average is the enemy of good, good the enemy of great.  If they're truly good coaches, they'll find employ elsewhere.  If they can't find employ elsewhere - then why are they on your staff?  If you don't make those decisions now, you'll make them later. Under duress.  And Longhorn fans can bring the duress.

This is a place where attractive women will yell things like,"If you run that half-assed bubble screen on 3rd and long again, I will personally come down there and punch you in the groin." 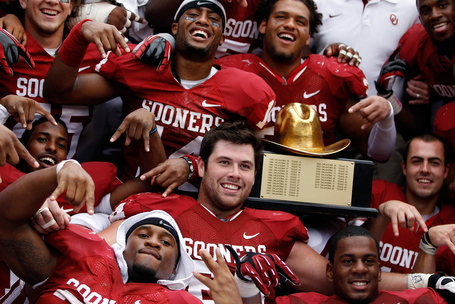 We hate them.  They hate us.  Both sides like it that way.  Beat them more than they beat us or we're going to make your life unpleasant.  If that's a problem for you, you've made a horrible mistake coming here.  It's not a game.  It's a fight.  You'll figure it out when you're walking through the tunnel and you have goosebumps the size of robin's eggs.

That clip sums up so much about them.  Study it.

They're still struggling with an inferiority complex even as they move incrementally each year towards becoming a normal school, indistinguishable from any other quality state school. That makes older Aggies act even more insane as they mourn the loss of what makes them different.  They're funny in every sense of the word and even when they are playing sporadically good football, you can drive them nuts by approaching their modest achievements with bored condescension.  There's a reason all Texans tell Aggie jokes.

It should be noted that condescension is our default approach to every other team.  Only the Sooners are honored with legitimate hatred.  That's a fan perspective though - you're quite welcome to bring the hate on everyone. 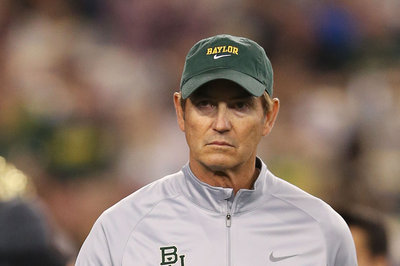 He thinks you're sitting on his rightful throne.  His goal will be to drop 70 on your defense every year to remind you of that fact.  What are you going to do about it?

The Big 12 as a whole is a dead end and will be getting worse as demographics and reality catch up to it. Unfortunately, the league has several excellent coaches who can win a lot of good will from their fan base by beating Texas.  Texas is the game circled on their schedule. Weather the storm or bring the storm to them. Your call.

Some lazy old guys who value short term dollars over long term vision tied us into this league for the foreseeable future, so you might as well win it every year. If you do, Texas hype should be sufficient to land us a playoff MNC shot. 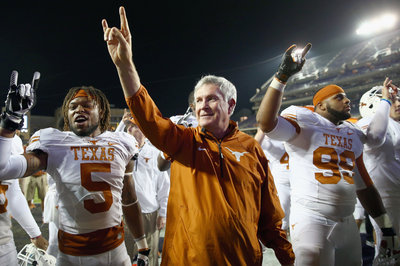 Mack Brown came before you.  We owe him a lot, but he lost focus on the actual job he was paid to do. It happens. He's going to try to give you advice, because well, Mack Brown.  Take careful notes on his more general observations.  He's a canny observer of anything that doesn't have to pass through his emotional prism and he has masterful coalition-building skills.

How it call came undone for him here is a useful cautionary tale though:

Don't do things like make the largest athletic donor your personal attorney or quote their opinions on football in press conferences.  It's bush league, ignores boundaries, and will reveal how totally disconnected you are from the average fan.

A real family thrives on accountability.

We like good football players more than legacy stories.

Change the culture.  Don't make concessions or compromise where we're clearly failing.  Cancer can't be bargained with.  Ingratiate yourself to us with teams that give maniacal effort on the field and get better as the season progresses, not with political retentions and promoting someone out of the way instead of firing them.

Some of your inherited support staff are on the gravy train.  Everyone knows who they are.  Your boss Steve Patterson should help you out by doing that work for you.

The national media will tell you that the LHN is a burden.  Because that's what your predecessor told them.  They don't watch it or bother to learn about it because that would require effort or curiosity. Your predecessor hated it because he had to constantly explain ass-kickings on it and find a way to deflect from the poor job he was doing. He'd have loved it his previous ten years when he was kicking asses.  The LHN is a weapon.  The people that work at the LHN are excellent. They're there to make you look good, put you in the best possible formats (Q&A, talking about players on film, not delivering speeches like a politician), and giving you an extraordinary platform to convey your new culture of accountability.  It's your propaganda machine.  Unleash it.

Work hard in areas that impact the results on the field.  No one cares if you refuse a media opportunity or pass up a luncheon.  The types of people who whine about it are blowhards.  Win games and graduate players and their sails have no wind.

Everyone will tell you that the Texas job is mostly backslapping and politics, mistaking the last office holder's skills and preferences for the actual requirements of the job.  Study our history.  We hired you for a reason.  You know who you are.  We know who you are.  You do you, Charlie.  We've got your back.

The state of Texas has a lot of talent.  We take (possibly unhealthy) pride in our high school football.  However, no state has quality talent from year to year at every position.  In those instances, please recruit out of state.  Or anytime we can upgrade.  People will tell you that Texas high school coaches won't forgive this and that Texas pride will be affronted. None of us will be offended, least of all high school coaches.  Good Texas high school coaches secretly wish they could upgrade that fat asthmatic kid who is scared of fire ants that they're starting at right guard with some monster recruit from San Diego or Miami.  I think you get this in a big way.  Ignore anyone who tries to convince you otherwise.

Texans embrace meritocracy.  At the end of the day, we care more about what you've done than who you know or how you're perceived by those with fashionable opinions.  The football program at Texas has forgotten who we are.

Charlie, you're here to help us rediscover ourselves.  Do it boldly.