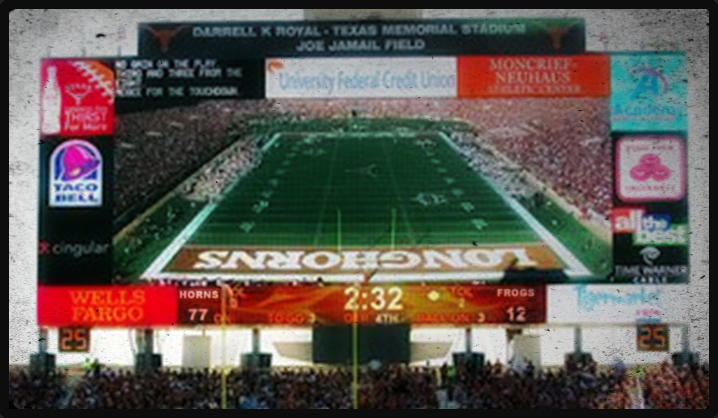 My wife is a Frog. Not her looks (she’s actually gorgeous), but she’s a TCU alum. So, I’m schizophrenic about our upcoming game against the Horned Frogs of dallas Fort Worth: If Texas plays as good as I think they’re going to play, I’ll have to do the impossible - swallow my excitement, ingest my enthusiasm, and repress my elation. If I manage to succeed, I will die. Literally. In a puddle of pee.

What makes me confident that we can beat TCU is the defense. Not ours so much, but theirs.

The UTD-fense will have its hands full corralling and containing Boykin; but I have faith in Charlie Bedford. So far, Texas has played eight Big 12 opponents and has allowed an average of 15 points per game. Those eight teams average 30ppg against each other and Texas. That’s cause for confidence in my Easy Reader book.

I’ve had to watched TCU all year and been flummoxed by announcers and commentators talking about how good their defense is. Patterson’s reputation as an excellent defensive coach is well deserved. However, I think that notoriety is carrying him this year because the stats just don’t confirm it. Take a look at the incredibly creative and stunning chart below exhibiting TCU’s defensive efforts against Big 12 teams this season.

TCU is allowing Big 12 teams to score 30ppg. Granted, they still have us and Iowa State to play and we’re both scoring only 25ppg, so TCU’s average could drop some. But, this just confirms what my eyes have been seeing throughout the year. 30ppg looks passable when your offense is scoring 46. But...

If they hold us to our scoring average and we hold them to our defensive average...

*Note: on the off-chance I am right but I don’t die, could someone please put me up at their house for about week? Thanks.