Baylor's up-and-down season is a microcosm of his tenure in Waco.

Share All sharing options for: A Grand Unified Theory of Baylor's Scott Drew

Baylor comes into Wednesday's game in Austin on a minor upswing, having won four straight games and getting themselves back into the fringes of the bubble. They survived home OT wins over Kansas State and Oklahoma State and then soundly beat West Virginia in Morgantown. The Bears have four games left - if they can win their 2 home games and split their road games against UT and Kansas State, they should be in decent shape to make the Tournament.

After getting out to a 2-8 start to Big 12 play, it's a minor miracle they still have a chance at the Big Dance. At the same time, after a 12-1 non-conference record that had them ranked in the Top 10, it's a minor miracle they are on the bubble in the first place. That, in a nutshell, is the Scott Drew experience in Waco. As a coach, he has a bizarre combination of strengths and weaknesses that makes his program absolutely maddening to follow.

This year's Baylor team has all the hallmarks of a Scott Drew-coached team. Namely, they have an absurd amount of talent that isn't utilized properly. They are an AK-47 that Drew uses like a machete. He has multiple future NBA players on his front-line, but he doesn't run an inside-out offense to take advantage of them. They are as athletic as any team in the country, yet Drew sticks them in a gimmick 1-3-1 zone that minimizes their strengths.

In a December game at Cowboys Stadium, Isaiah Austin and Cory Jefferson outplayed Julius Randle and Willie Cauley-Stein, two future lottery picks. Austin, at 7'1 225 with the ability to shoot 3's, put the ball on the floor and block shots, has as much raw talent as anyone in the country. Jefferson, an athletic and skilled 6'9 220 power forward, will have a 10-year career in the NBA. He can block shots, clean the glass, finish on the pick-and-roll and shoot the 20-foot J.

When you add Rico Gathers, a "6'8" 270 bowling ball with a surprising amount of skill, you can make the case that Baylor has the best three big-man rotation in the country. If they switched places with the Kansas big men, Bill Self's program wouldn't miss a beat. Nor does it take a genius to utilize big men like Austin, Jefferson and Gathers - just a coach who runs a half-court offense that moves the ball around the perimeter and pounds the ball inside.

The Bears (finally) seem to have figured this out in their recent four-game win streak. Austin and Jefferson have averaged 25 FGA's in their last two games. It's not rocket science - no one in the Big 12 can guard those two when they get the ball wthin 15 feet of the basket. Either they are scoring, grabbing offensive boards off the miss, getting fouled or getting double-teamed. When you play inside-out with skilled big men, it opens up the game for everyone else.

In contrast, the two only had 16 FGA's in Baylor's loss to Texas in late January. When Brady Heislip, Kenny Chery and Gary Franklin are hoisting off-the-dribble 3's and not running any offense, the Bears are pretty easy to beat. As Shaq famously said, if you don't give the big dog a bone, he's not guarding the house. As a post player in high school, I can attest that there's nothing more dispiriting than watching asshole guards jack up shots in the first 10 seconds of a possession.

Long misses lead to fast run-outs, making it hard for Baylor to set up their 1-3-1 hybrid zone. Drew's obsession with the zone is one of the more bizarre things I've ever seen. It's hard to emphasize what a poor strategic decision it is. The only other team in the country I can remember using the 1-3-1 in recent years is Northwestern. Coincidentally enough, their new coach junked the zone and has a team of underwhelming athletes playing excellent defense in the Big 10.

To see the problems with the 1-3-1, all you have to do is compare it with its far more popular cousin, the 2-3: 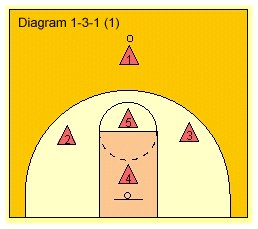 The 2-3 concedes the top of the key, which very few college big men have the game to exploit, in order to press out on the three-point line, closing off the corner 3, the second most efficient shot in basketball. The 1-3-1, in contrast, creates openings all across the 3-point line in order to defend the the top of the key. And while 2-3 can trap you at any point in the floor, defenses have all day to exploit the 1-3-1, which can't trap guards without creating massive holes on the back-line.

In non-conference play, where coaches have a limited amount of time to install a 1-3-1 game-plan and players have no familiarity with the length and athleticism of the Baylor defenders, the zone can be effective. However, in Big 12 play, when teams know the weaknesses of every opposing player and have seen the same defense for multiple seasons, it's laughably easy for opposing coaches to slice up the 1-3-1.

That's what happened in 2012, when Baylor started the season 17-0 and was ranked in the Top 5, before going 10-7 in the last two months of the season. However, the good news for Bears fans is that team managed to right itself enough to get a 3 seed in the NCAA Tournament and make it all the way to the Elite Eight. In tournament play, the bizarre things Scott Drew does and the incredible athletic ability of Baylor's players can make for a difficult match-up.

After taking Baylor to two Elite Eights in three seasons, Drew probably has a lifetime sinecure in Waco. At the same time, it's worth pointing out that his victories were over a 14, 11 and 10 in 2010 and a 14, 11 and 10 in 2012. Perhaps a more telling indication of his coaching ability is Baylor's two trips to the NIT Finals in 2009 and 2013. He's been recruiting at the level of a Top 10 program for half-a-decade and he's missed the Big Dance in 4 out of the last 6 seasons.

Part of what makes evaluating a college head coach so difficult is it's really 2-3 different jobs poured into one. At its core, a college head coach is a GM and a coach - he's Sam Presti and Scott Brooks. Scott Drew is Dr. Jekyll and Mr. Hyde - watching him undermine his own recruits has become an annual tradition in the Big 12. Going forward, as long as he can keep recruiting DFW, Baylor should be OK, but they are never going to challenge Bill Self.

The reality is that if a coach isn't a good GM and a good strategist, he's replaceable. The Baylor job isn't what it was a decade ago - it plays in one of the premier basketball conferences and it's an hour drive from one of the biggest hotbeds of basketball talent in the country. For as much work as Drew has done to build their program up from the ashes, the Bears no longer need him. Let's hope they don't realize that anytime soon.

As far as tonight's game goes, you can look at our preview from earlier in the season for a scouting report. If Baylor is committed to playing inside-out, doesn't let our guards speed them up and has junked the 1-3-1 to play a solid man defense, it should be an excellent game that goes down to the wire. If they revert back to their old habits, though, it should be an easy win. Given that Scott Drew is their coach, I know which way I'm betting.