A Fool's Errand: Who is the King of March Madness?

Share All sharing options for: A Fool's Errand: Who is the King of March Madness?

There was a point many moons ago when I was trying to get an objective sense of how Rick Barnes' post-season record should be viewed from outside the bubble of Texas sports fans. Rick Barnes is a bit of an ambigram, people see what they want when they look at him. So I tried to quantify his success(or lack thereof) with a system that samples generously from Bob Sturm's NFL Franchise Rankings. It didn't take long until my boredom while traveling for work ballooned into a system to measure the post-season success of NCAA programs overall. 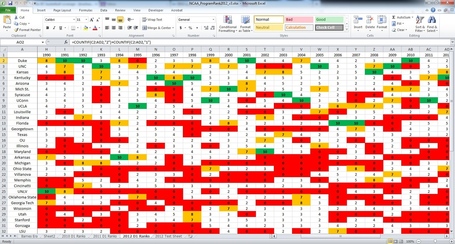 It was left in the dustbin for a couple of years, but now that I've been locked into a lifetime of indebted servitude to create content for Scipio & Sailor it seems a good time to bring it back to the forefront. (Honestly, I'll do whatever it takes to get them to stop blaring North Korean folk music over the loudspeakers for an hour. Whatever. It. Takes.) For those who aren't familiar with the rules - which, judging by the traffic stats on my old blog, is everyone - here's how the system works.

I'm sure there's a statistical weakness to this system that will probably drive Jeff Haley nuts, but I think it gives a reasonable approximation of how well the best programs fare in the NCAA Tournament. Onto the results*:

There's a lot to chew on in the data, depending on who your favorite team is. One thing that becomes abundantly clear is the dominance of Duke under Mike Krzyzewski(yes, I have to Google his name every time too). In this system, they average an Elite Eight appearance(5.28 points) every year since 1985. Duke is half a point per year better than the 2nd place teams, they're the only program with double-digit Final Four appearances, and the only program with 20+ Sweet Sixteen appearances in the list. Coach K is the king of March, and unless the team bus careens off a cliff each year for the next 3, that's not changing. In many ways, the data confirms who the 'blue bloods' of college basketball are; it's not surprising that Duke, Kansas, North Carolina, & Kentucky are at the top of this list(Kentucky is lagging the other 3 by a significant margin, but still significantly ahead of #5, Arizona). They are almost literally the 1%-ers, being the top 4 teams(1.14%) in a division sporting 351 entrants. They are in their own league, and it will take other programs a significant amount of time to catch them.

There are a total of 45 programs in my spreadsheet & outside of the above-acknowledged basketball royalty, many of them seem to follow one of two paths. The first path is what I'll call the 'Lightning in a Bottle' group: they had a handful of really good years(many culminating in a title game appearance/victory), but they also miss the tournament entirely fairly regularly. UConn is a prime example; they have 3 NCs & rank 9th on this list, but they also miss the tournament more than 1/3 of the time(37.93%). Florida is another team in this path with 2 NCs & the same percentage of absent years(37.93%). The other path is one I'll call the 'Attendance Champions'; they are programs that have a regular presence in the tournament, but don't advance to the final weekend often. Arizona under Lute Olson is the most notable example; from 1985 to 2008 Arizona made the tournament every single year...and were bounced in their opening game 10 times. No other program in the top 10 of this list has lost their first game more than 6 times(Michigan State, Louisville, UCLA). In all fairness to Lute, he did have 4 Final Fours in this time period so there were years when they made a deep run, however Arizona making an early exit was one of the safer bets in March more often than not. The only teams to make the tournament more often from '85-'13 are Duke & Kansas, yet Arizona is 30+ points behind them. Texas, Illinois, & Oklahoma are lesser examples of the Attendance Champions, but none fit the bill quite like Arizona under Lute. Gonzaga under Mark Few seems to be his spiritual successor; that guy's teams get knocked out in the first weekend like clockwork(66.67%).

*I will add a disclaimer to these stats: as much as I've checked & re-checked my calculations, I entered 1260(and counting) results by hand so there's the possibility I made an error somewhere. If you run across numbers that don't seem to add up, let me know & I'll look into it.