Despite a late-season slide, Texas still has a chance to make a run in Kansas City.

Coming into the season, going into the Big 12 Tournament with a No. 3 seed and a spot in the Big Dance already secured would have been considered an overwhelming success. So while a 4-4 slide to end the regular season has dampened the mood around the Texas basketball team a bit, it shouldn't take away from a season that has exceeded even the most optimistic expectations.

The Longhorns, like most young teams, were really good at home but struggled to win road games against quality opponents. They lost at Oklahoma State, at Kansas State, at Iowa State, at Kansas, at OU and at Texas Tech. They probably would have lost most of those at any point in the season, but because they were back-loaded onto the second half of the schedule, the narrative kind of wrote itself.

The good news, going forward, is they aren't playing any more road games. Post-season play in college basketball occurs on either neutral or semi-neutral floors, which is part of the reason why March is so unpredictable. Home floor is the great equalizer in college basketball - I'm not surprised when even the best teams lose on the road in conference play to an NIT team, much less an NCAA Tournament one.

Depending on how things go in Kansas City, the Big 12 could have as many as eight teams in the NCAA Tournament, an astounding number on several different levels. However, with the exception of Kansas, none of the other teams really scare you. On a neutral floor, Texas has as good a chance as anyone of making a run in the Big 12 Tournament. The bracket sets up well for the Longhorns: 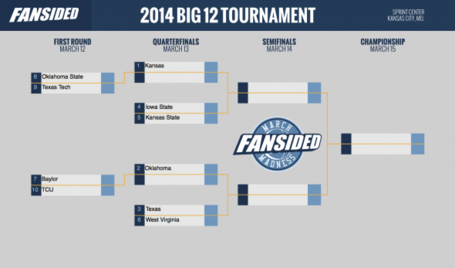 As the No. 3 seed, Texas is on the opposite side of the bracket as No. 1 Kansas and wouldn't have to face them until a possible championship game. Even better, Kansas may have to face No. 8 Oklahoma State in the quarterfinals. If anyone's going to beat the Jayhawks in Kansas City, it's OSU, the only team in the Big 12 with multiple NBA-caliber athletes on the wings they can throw at Andrew Wiggins.

Oklahoma State matches up well with Kansas - for all their struggles this season, they lost by 2 at Allen Fieldhouse and won by 7 at Gallagher-Iba. Wiggins exploded for 41 against a West Virginia team without any wings over 6'4. In two games against OSU, which has 4 elite athletes with size (LeBryan Nash, Brian Williams, Marcus Smart and Markel Brown) on the perimeter, he went 6-21.

If Kansas gets by Oklahoma State, I think they will win the whole thing - if Joel Embiid is healthy. However, after missing the last two games and flying out to see a back specialist in California, that might not be the case. The winner of Iowa State-Kansas State might be able to take advantage of an OSU team playing their third game in three days or a depleted Kansas team in the semifinal.

On our side of the bracket, Texas has a quarterfinal game against West Virginia on Wednesday. The Mountaineers might have the most talented group of guards in the conference, but they have very little size upfront and have no real answer for  Killa Cam Ridley and Jonathan Holmes. Texas won by double digits in both games in the regular season, and as long as they take care of the ball, should be in good shape.

The other quarterfinal in our bracket pits OU against the winner of Baylor and TCU. Baylor, after getting out to a 2-8 start to conference play, managed to right the ship and fight all the way back to 9-9. Take care of business against the Frogs and they can punch their ticket. They also have the size to give Sooners trouble - OU is a 4-out team with an undersized 5; they can't check Cory Jefferson or Isaiah Austin.

Add it all up and there's no reason Texas couldn't make a run to the championship game. Of course, given how level the playing field is, they could just as easily lay an egg at any point in the bracket. There are 7 good teams in the Big 12 and all of them have reason to be confident headed into the conference tournament. As long as we can avoid the only great team (Kansas), I like our chances.