The burning questions you want answered...were not asked here.

Here's my chat with Rock Chalk Talk, in which I invoke Ted Dibiase, one of the finest wrestling heels of all time.

misterbrain was kind enough to share his thoughts on the state of KU football.

What's the current sentiment on Charlie Weis?  Hey, 4-20 is a rough start, but 2-1 recently!  Look at that trend line.  Does KU need time to recover from the Turner Gill Experience or has Weis proven conclusively that he offers no Decided Schematic Advantage?  Any successor ideas?

I'd have to say that the sentiment surrounding Charlie Weis is decidedly negative, considering that we have already had one article discussing who the next coach should be and another with serious discussion about how hiring him was the biggest mistake in the last 5 years, yes, even over the TG era and the Mangino firing. We even had a couple people hoping for a blowout loss to Central Michigan so we could fire him faster.

We have too many examples of Weis either showing he doesn't seem to care about how the team is doing, or actively handing off things that should be his responsibility as head coach. And with apparently no ability to adjust in-game and a refusal to utilize his best players, I'm starting to wonder if Weis ever actually offered anyone a Decided Schematic Advantage, or if he has just been riding on the coattails of what Tommy did while Weis was in New England.
As for successors, we have gone over possibilities constantly, but the real problem is finding any names to get excited about that would definitely take the KU job. To look at it objectively, it is going to be difficult to rebuild the program in one of the toughest conferences in the nation without a decided schedule advantage that was afforded to Mangino in his second-to-last year here.

I know that Tony Pierson is really good.  I know LB Ben Heeney.  I don't recognize anyone else.  I long for the heady days of Todd Reesing, when I could legitimately name a dozen Kansas football players.  So who should we pay attention to?

Wait, you mean you didn't watch Nick Harwell at Miami (Ohio) or Nigel King while he was at Maryland? Yeah, me neither.

Jake Love is a name that you should recognize, as he has been Ben Heeney's sidekick for the last two and a half years. He had an off year last year, but so far appears to be back to trying to make a name for himself.
The two fill in running backs, Corey Avery and De'Andre Mann, have performed well, and we're waiting for the breakout game to come from one of them.

The real name you have to watch out for is Trevor Pardula, the most consistent player on the team. He routinely pushes the ball deep down the field, often resulting in big gains in field position. Wait, I forgot to mention that Pardula is the punter? You mean punting the ball and hoping for a turnover isn't a viable option for the offense? In that case, in the famous words of one foul-mouthed robot, "We're Boned".

Your current helmet decals are absurd.  You're not the University of Walt Disney.  What was so wrong with this? 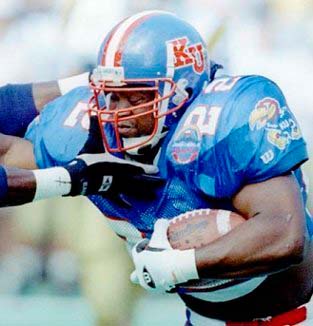 You can never have too much Jayhawk. When the huge Jayhawk was first put on the basketball floor, I thought it was just too much. But as time has passed, I've come to appreciate just how much that huge Jayhawk does for us. I mean, just look at our home record since it was installed (175-9).

The Jayhawk on the helmet is just our attempt to bring some of that magic to the football team. It doesn't work well away from home, since the individual Jayhawks on the uniforms can't combine their power with a Jayhawk in the center of the field. But by bringing the Jayhawks onto the helmets, we aim to increase the mental clarity by allowing the power of the Jayhawk to cleanse the mind of outside distractions and unleash the true talents of our players. Unfortunately, it seems that we may have over-estimated just how much talent was being suppressed before...

How many days until basketball season?

38 days until the first exhibition game.

49 days until the first real game.

But who's keeping count? I mean, the Jayhawks aren't last in the conference yet, so there's still hope, right?