We're still pissed from last week, and we're assuming the team is too. Feeling froggy? Then leap.

When many looked at the opening 6 games of the season, 3-3 seemed like a very likely possibility. Not necessarily optimistic, but definitely realistic. We now go on the road to the greater Arlington/DFW area two weeks in a row, the first of which to take on a pretty decent #3 team in the country...and getting to .500--a goal that 5 years ago would be jail-able for even thinking--only takes a miracle, a prayer, and the feel-good part of the 2015 Texas Longhorn football documentary feature film Remember the Titans (where ScipioTex is Bill Yoast?).

The team seems salty enough, but we could always use a little help from the man upstairs (not you Bob Bowlsby).

Now, would the congregation please rise? In communion with our Horned Frog brethren, please open your hymnals to #45-35.

We three Pregamers of Austin are

Bearing jokes we travel not far

Strong is shouting, Moorer is growling,

Walt Anderson should be ashamed,

They think over us they reign.

It’s been rough our record has shown,

We’ll buy you all keystone.

Save us from Kansan plight.

Adidaz was thrilled to finally find a use for all that inventory after gambling big on the whole "vejazzling" craze.

We've started to get to weekly duplicates, which is inconsiderate when calculating just how prolific the second half of the schedule will have to be. Subtracting the mega-longshots (anyone want to give odds on Obama, Van Buren, or Fillmore?) we'll need to average 4-per-week . Where are the Kennedys, Roosevelts, and Harrisons of the world?

TejasChaos: If there is such a thing as Karma, we must be saving up for something special. Will it be this week? Probably not.

VY Pump Fake: It took a stateside visit from the Pope to will TCU to a win last week. Not so lucky this time. Texas wins on a Hail Mary.

Kyle Carpenter: Remember the halcyon days when a bone-headed (if soul-crushing) ending resulted in us sinking into the depths of the Big 12 Tie-Breakers flowchart to see which number the Mack Brown vs. Mike Leach vs. Bob Stoops Chess Boxing match was and assess Mack's chances to win the trial-by-combat-and-chess and send us to the Ship? Now we sink into the depths of a stadium marked-up beer and consider if boneheaded kickers (and crooked refs) are going to oust one of the finest men in football. Let's hope Charlie has a miracle and can save his job (or that people aren't actually that dumb). 41-38 Texas? 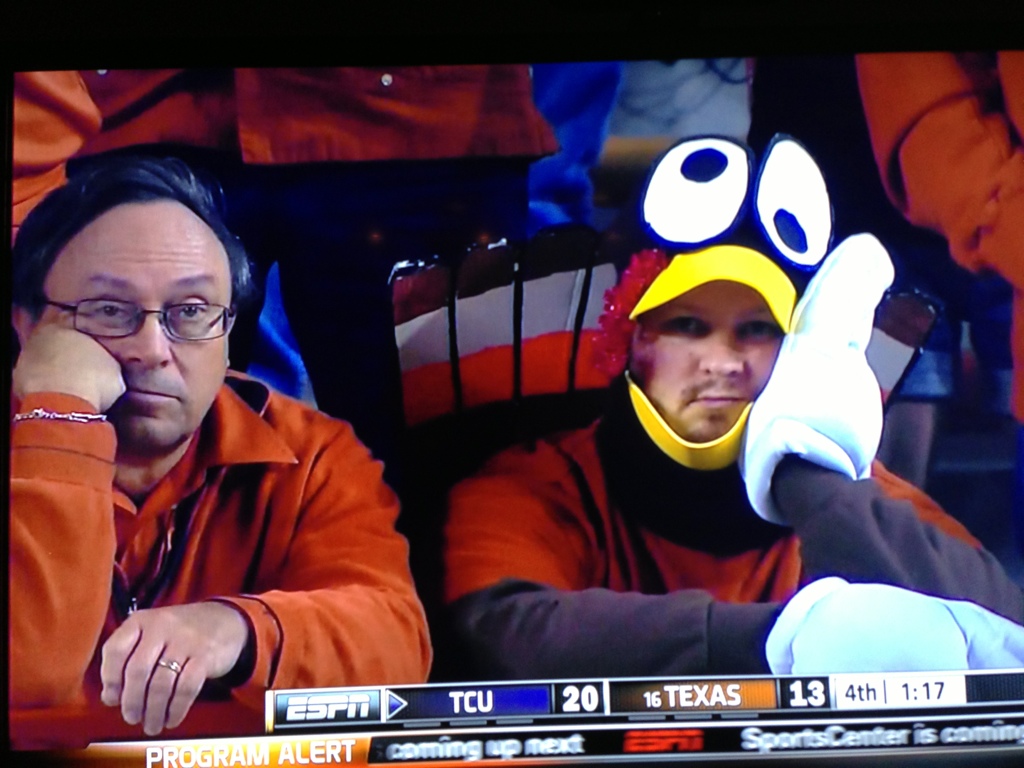