A Trip To Ole Miss And The Grove: Texas Escapes With A Split

Share All sharing options for: A Trip To Ole Miss And The Grove: Texas Escapes With A Split

The best any visitor can hope for when visiting Vaught-Hemingway Stadium is to get a split. Ole Miss may lose the game, but the Rebels aren't losing the party.

Various reports say there were 10,000 or more Texas fans invading Oxford and I accounted for one of them. I grew up not too, too far from Oxford and actually saw Manning play there in person . . . Archie, not Eli. But it had been more than 20 years since my last trip and I was shocked at the evolution. In the 80s, tailgating on campus consisted of pickup trucks sprawled about for some picnicking. However, a heavy rain and a cancer patient changed everything so that now, an aerial view of the Grove looks like a giant quilt with trees growing through it.

The picture below shows exactly what the Grove looks like if you're standing there with a sheet of wax paper in front of your face. What I'd hoped to capture was how tents were bunched together across from where I was standing. However, my strong suit is second-guessing and hyperbole, not photography. 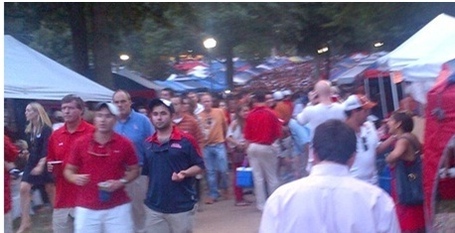 I have enjoyed tailgating at a number of venues in the Southeast. But here’s what caught my eye about a tailgating experience ranked either first or second on any list you can find:

Frankly, having been to a handful of games in Oxford before the Grove evolved, I was blown away at what it’s become. All I can say, is at least we got the split.