The Longhorn offense had a coming out party against a bad Ole Miss defense, fueled by dominant OL play, David Ash rocketing into his own, receivers owning the football and making plays like actual athletes instead of automatons, and running backs trucking safeties and nose tackles while making slashing cuts that could trigger a Scotland Yard investigation. No single unit can reasonably be graded below an A and Texas fans got to experience what the Harsin offense looks like (and will continue to trend towards) when execution levels match the play call and we possess the lion's share of athletes. Everything works, tendencies evaporate, and loading up against the run becomes as ridiculous an idea as playing three deep zone.

Although the Ole Miss defense is certainly poor, they're not worse than Texas' previous two opponents. The O's ability to make plays downfield in the passing game was the missing component needed for the Longhorn offense to open up like Oklahoma State's admission standards.

In short: if you're not excited about what our offense did, yours is a joyless existence.

Here were our offensive drives after the first punt and defensive touchdown.

676 yards of offense, 8.7 yards per play, 350 rushing, 326 passing, 0 turnovers, 66 points and we could have had 76 points if we hadn't taken a knee on the Ole Miss 1 yard line or missed an easy field goal. The OL gave up two negative plays out of the 87 we ran against a defense that was in the Top 5 nationally in sacks and tackles for loss and was stunting on every play. The inside power game consistently set us up with 2nd and 5 or less, our attacks on the edge resulted in a number of big plays, and the passing game was dominant in all aspects. There was no phase of offense in which we didn't do exactly what we felt like doing, including a few purposeful ball control series in the late 2nd quarter/ early 3rd quarter when it became apparent that our defense decided that tackling was an elective. 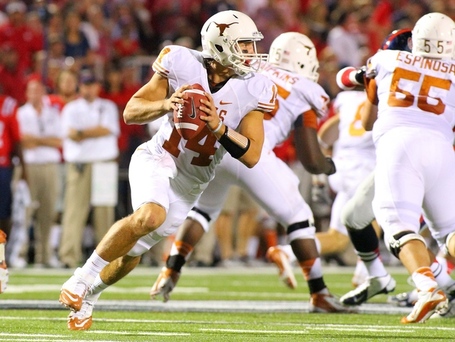 David Ash. Quarterback. Let's stick game manager in the dead cliche file. 19 of 23 for 326 yards and 4 TDs is a spectacular enough stat line, but it's also worth noting that two of his incompletions were essentially throw aways when the Rebels sniffed out a play call. At one point, Ash connected on 15 passes in a row.

A lot of bandwidth is being devoted to whether or not Ash's placement on his four deep balls was perfect - it wasn't on two of them where he was late and short, was flawless on another, and was pretty damn solid again - and I appreciate that you find that tree branch interesting and it's pretty boughs dominate your attention, BUT HEY PERHAPS YOU SHOULD TAKE NOTICE OF THE FACT THAT YOU'RE STANDING IN A FREAKING FOREST.

David Ash let it go. He quarterbacked. He was cold-blooded. The scared freshmen from last year who never had a chance to succeed finally showed what he can do with a little growth and patience from a fan base that measures developmental time lines in mayfly life spans. He threw great balls in the short and intermediate game (see the 23 yard strike to Jaxon Shipley on a post just as he makes his break - his 2nd best pure throw of the night; his checkdowns - as they have all year - consistently give the receiver a chance to make YAC), he created coolly with his feet in the pocket (slips a sure sack on the rollout, reverses field, fits a strike in a tight window to Mike Davis standing on the sideline, my favorite throw of the night) and his decision to repeatedly throw it up against single coverage to the correct shoulder against DBs who couldn't track the ball was good percentage football. It's what smart QBs do. Complaining about it is a bit like telling Malcolm Brown not to truck a 160 pound cornerback when a cutback would have been more aesthetically pleasing. You press physical advantages. Mercilessly. That's winning football. He wasn't winging prayers into triple coverage with our guy coming up with the tip drill.

The most important takeaway from this game was Ash demonstrating legitimate play-making, risk aversion when warranted, and the willingness to sling it when our athlete was better than theirs in single coverage. That's what we want to pair with a legitimate power running game. And I'll gladly take a deep interception or three if it means opposing defenses are scared to death to load up the box.

Aside: We showed quite a bit of Pistol, Ash ran the ball twice to good effect, and as I posited in the preseason, it's pretty clear to me that we're going to use his legs in some big games more than we've shown to date. 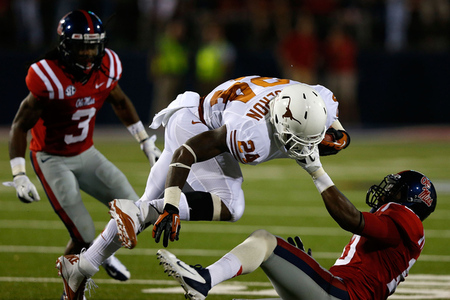 Bergeron was the hammer early and though his runs (11-48) didn't break long (he missed that chance with his injury), every one of them was productive and sent a message to the Ole Miss defense about the kind of night they'd be having. Loooong. Watching him truck an Ole Miss nose tackle was particularly amusing. Malcolm Brown was textbook (21-128-2 TDs) and he also got involved in the trucking business. Great cuts, vision, decisive, ran with power. Typical Malcolm. Although he's a gear shy of being a truly special running back, I'll settle for very good and who knows if Wylie can't unlock some more juice down the road. DJ Monroe had his obligatory TD on one carry and I was quite pleased to see Gray's late game run (9-50). He showed me a lot of vision and his acceleration is special. Daje was relatively quiet after his big splash against New Mexico, but I expect we'll see more from him soon.

Once again, our RBs provided a huge benefit in the passing game, combining for 7 catches, 58 yards, 1 TD distributed over five different pass catchers. For the year, they've caught 20 balls for 225 yards and 2 TDs but because that work load has been distributed across a half dozen guys, it's not getting hyped up. Put that production in one RB and we'd be talking him up as Marshall Faulk crossed with Roger Craig. It's an instrumental part of our offense and a place where Texas can find a lot of cheap yards. 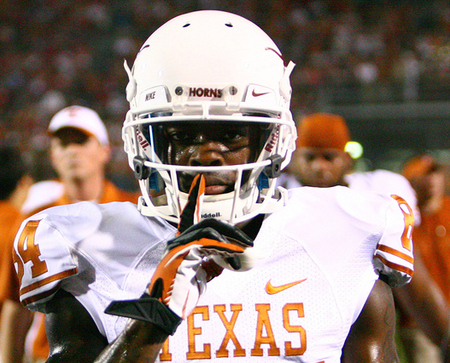 That was Magic, Mike. Mike Davis played his best game as a Longhorn, not only as a pass catcher (5-124-1 TD) but also as a blocker. He got the message that pass catching is a tug of war as much as a ballet and seeing his production and ego fed when he demonstrated the right behaviors could have a huge impact on his value going forward. We'll get to see his learning in two very short weeks when he takes on two of the best corners in the league.

Marquise Goodwin was amazing and reminded us of how difficult a match-up he can be when facing an opponents #3 or #4 guy in coverage. Two catches for 102 yards, two carries for 80 yards, 2 TDs total. Is averaging 45.5 yards per touch good?

Barrett Matthews is getting more playing time each week and if you're an undersized DE or LB, he's your absolute worst nightmare because his motor doesn't stop until you're buried. Greg Daniels had some good blocks as well, but he has to learn to hold his water. Counted two motion penalties on him. DJ Grant caught an easy TD, the kind that our offense basically gifts to the position when firing on all cylinders.

We didn't need much from Shipley in this game (3-35) and defenses are going to have to seriously reconsider their current attention to him and our running game while allowing Goodwin and Davis to run free against their weaker coverage guys.

I will break down individual play later as we have plenty of time in the bye week, but they were outstanding. So proud of the growth of these guys and so pleased with the hire of Searels (about which I was agnostic). I made a lot of noise before the game about the Rebels lack of size in my preview and respective Q&As and though speedy, blitzing, undersized fronts used to give us huge headaches when our run commitment was as shaky as Chris Farley on a tight rope, our new OL attitude, schemes, and play calling forced their greyhounds to wrestle us in a closet until we decided that they were sufficiently pummeled for us to run laps around them on the track.

The Texas OL was completely and utterly dominant. I want you to think about the last time that declarative sentence could be credibly written. 2006? That feels like a really long time ago.

More than Texas imposing their physical will on each snap, mental or assignment mistakes could be counted on one hand. This was as clean a game on the OL as I've seen. Texas isn't just getting more physical, but surrendering only 5 tackles for loss through three games, speaks to the mental side of the equation too.

Last year we gave up 6.8 tackles for loss per game. So far in 2012? 1.7 per game. Yeah, yeah disclaimers about opponent strength notwithstanding, this group has their head in the playbook and their wits about them in the games.

What does it all mean against better defenses? I don't know. But I do know that when Texas plays a bad defense, we can do three things.

1. We can dominate them totally and thoroughly, and worry about how we'll do against better opponents.

2. We can play OK and put up respectable points, and worry about how we'll do against better opponents.

3. We can play poorly, get worked over by inferior athletes, and worry about how we'll do against better opponents.

Knowing that the offense is still a work in progress - yes even after this outburst - how you react to our success is more a referendum on our basic disposition as our team's performance.