What about that Baylor line? 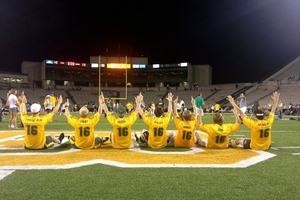 No, I'm not talking about the dorks mimicking the world's most virginal end zone corn...

I'm talking about this one.

Baylor -15 over Texas (up from -13 just hours ago).  The Bears are heavily favored despite sharing the same conference record as the Longhorns.  While we can start playing the transitive common opponent game (Texas beats ISU on a fluke, Baylor beat them like they stole their rent check; Texas thoroughly manhandles TCU, Baylor struggles with them to such an extent that Gary Patterson tries to claim the moral high ground over someone in post-game) it's a mostly fruitless exercise.  Football is about match-ups and gritty can-do pioneer spirit.

Some of this is just an exercise in moving probability, right?

Let's all assume for the sake of argument that Baylor and Texas are fairly evenly matched and that this line is wrong-headed. If Baylor opens up an early lead, say 17-0, 21-3, whatever, off of simple bad Longhorn luck and a couple of big plays, you'd expect an evenly talented Texas to bridge that gap over time in a game that should have 160 snaps from both teams.  Leads lose all meaning in the Baylor space-time continuum.  But Texas has an identifiable deficiency at QB that makes rallying improbable when you change our run/pass mix. On the other side of the equation, where Texas posts an early flukish lead, Baylor will run their offense the same way up or down by three touchdowns.

The McCoy Factor (which whipsawed conventional wisdom against OU and TCU, I might add) means that it makes sense for bettors to contend that if Baylor wins, they'll likely win quite comfortably.  Not to mention that when Texas loses this year, they tend to receive a thorough ass kicking (Texas margins of loss: 19, 21, 25). That's distortive to the line in a way that may actually obscure true outright win probability.  Make sense?

My takeaway: if you believe in the Horns and want to bet Texas, forget the tantalizing allure of +15.  Bet for the outright win and take the +475 money line. **

Thoughts? Shoot some holes in this.

** It should be noted that, much like the government, I'm very assertive and confident in my bets with YOUR money.