Quandre Diggs is speaking truth, and Steve Patterson should listen up.

Share All sharing options for: Remolding the Texas Longhorns Fanbase

If you're unaware, last week ESPN published a list of the five best student sections in the Big 12. Texas didn't make the list. Thus in terms of fan enthusiasm, our 51K-strong student body is in the bottom half of the league. That's embarrassing and (sad to say) probably true. Quandre Diggs used a few tweets to sound off on the subject, with lots of heads nodding all around.

Over at BON, Wescott Eberts and curry.shoff have taken some worthwhile turns at bringing attention to Quandre's stand, both absolutely worth a read. But personally I found both articles to come up a little short in the "suggestions for improvement" department (though to be fair, neither writer was attempting to offer a full set of solutions, just some opinions as a launchpad for discussion).

I'm going to be a bit less cautious. I think the Texas administration, if they're bold enough, can fix this.

Poor fan enthusiasm is at heart a collective action problem. People in a crowd act like their neighbors expect them to act. People stand and chant all game in Aggieland because that's the expectation. People lean back on their duffs at DKR and clap idly to "Texas Fight" because there's no expectation to act differently. That's honestly all there is to it, and that's the rub. Changing that reality will not happen organically on its own, nor will it be budged by a handful of cantankerous Internet posters chiding everyone to holler and stay late. This is a problem that can only be effectively addressed by the folks who have enough power to reshape the institutional foundation of fan involvement. People like Steve Patterson, Bill Powers, etc.

Fortunately we have some pretty obvious examples of programs who cultivate their fanbases well. What they're doing differently from Texas is pretty obvious with just a cursory examination.

It doesn't have to involve dumping all alumni privileges out the window or putting students through Clockwork Orange-ish brainwashing sessions. It's simply prioritizing the broader fan experience, however that fits the options at the school's disposal, and letting everything else flow from that.

IMO that's not how Texas athletics has been run in recent memory. Instead, Dodds-era Bellmont has basically been using the almighty dollar as a proxy for performance. Longhorns, Inc. and so forth.

There's nothing sinister with that approach, exactly. It's just lazy and myopic, and less likely to fly when you're not contending for championships. To illustrate what I mean, tell me which of the following appeals to you most:

Do I need to explain why the second option is better than the first?

College sports is more than entertainment. It's about being part of a community and collectively experiencing a rite of passage. For alums, it's about reliving those memories and expanding on them as you grow older, and if you're a donor, helping your successors enjoy the same.

Let's look at a case study of how it's done right: Duke Blue Devils basketball, and the Cameron Crazies.

Check out the lead photo, above. Those are the Crazies. There's a wall of them, they're right next to the court, they're facepainted and going nuts nuts nuts from opening tipoff to final buzzer...and yet they're also the most bookish academic student body you'll find anywhere south of D.C., with an extremely wealthy alumni base. All the most-cited canards about why the Texas fanbase is poor - we're Ivy League wannabe teasippers, snobby elitists who have more cultured ways to occupy our time, with too many megawealthy alums who run the show, etc. - should all be applying to Duke, maybe even more so. So how did the Cameron Crazies come to pass?

The biggest part is certainly winning. But would you flinch if I told you that the seating arrangement was equally indispensable? 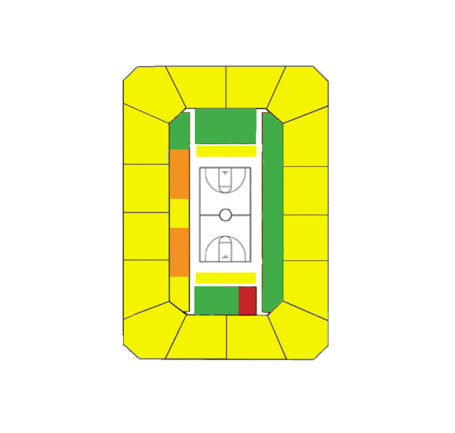 There's the Cameron seating chart. The green is for students, the red is for the band, the orange is for VIPs and special guests (including guests of the players, hence one section behind each bench), and the yellow is alumni reserved seating.

The Crazies section, the thin strip of green behind press row, has no seats at all. Not even benches. They're risers. And pretty narrow ones at that, maybe two or three feet, front-to-back. It's basically just a rack of old wooden pull-out stairs, the kind you find in most old arenas. And the entire Crazies section is only ten rows deep, and it's all crammed into 25 feet of floorspace between the arena wall and press row.

And guess which students get to stand there? UNDERGRADS! Why? Because they're crazy impressionable nineteen year olds who will happily act like idiots on national TV if they're embedded in a wall of madness. Grad students get the end court sections, which are aluminum risers (again, no chairs), where they have their own silly free throw traditions and hella stomping to do. Both the wooden and aluminum risers make tremendous noise when you stomp on them.

Is anything about this arrangement comfortable? Hell no. It's just f***ing epic.

Alumni get more love at Duke games than you'd think. The richest ones get to sit mid-court opposite the Crazies, and also in two rows of folding chairs along the end lines (so the players have some plush megadonor laps to fall in when they chase a loose rebound, to everyone's satisfaction). The upper deck is all stadium seating with excellent sightlines of not just the court but all the mayhem surrounding it.

And guess what? The alums actually sit down for most of the game. Just like they do at Texas! You just don't see that on television because, well, if you're plotting the TV camera angles at a Duke game what fans would you show?

Amped up yet? Well, let's take it down a notch: 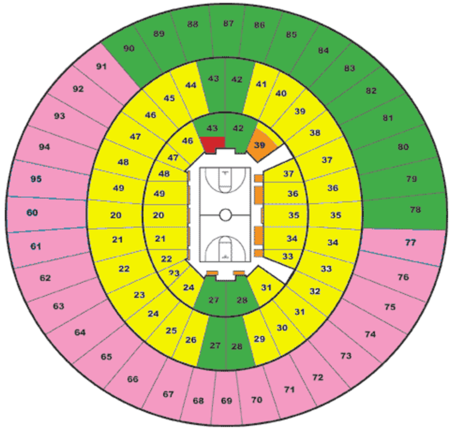 That's the Erwin Center (NOTE: it's also to scale with the previous pic. As cavernous as the place seems it's not THAT much bigger than Cameron; the lower arena is just a wee bit larger). The color scheme is the same as above, plus the pink sections for public admission.

Do I need to point out the differences? Clearly, this is a seating arrangement designed to give alums a direct comfortable return for their sponsorship rather than granting students an epic experience and the alums an opportunity to witness it.

Bottom line: does anyone think Duke would still be Duke if they had this seating arrangement?

If I'm Steve Patterson, how do I deal with this? Let's look at two options: one expensive, the other cheap.

The expensive way would be to simply abandon the Erwin Center for basketball, give the Nursing School some new digs, and build a smaller basketball-only stadium in its place, supersizing the Cameron seating arrangement. That's frankly what I would do.

But honestly I think the cheaper option would also work, either as a temporary fix while you build a new arena or even as a permanent solution, which is to give the Erwin Center layout a facelift using some Cameron design principles. Something like this: 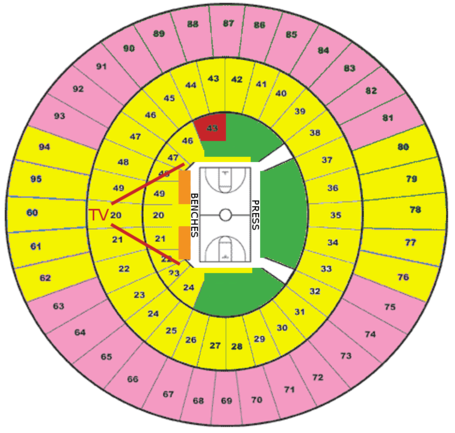 Do all that, and it won't be more than a year before students (and players) start coming to UT expecting to have a raucous good time at the Erwin Center.

But: what about football?

Football is a different animal, to be sure. Still, if you look around at the loudest stadiums it's clear we're not doing things the same way. By my estimation, we have two clear ways to increase the expectations of noise at DKR; as above, there's a cheap solution and a more expensive one.

The cheap solution is what Quandre and many other observers have pointed out: ticket reform. Namely, put the students and band together and close to the field, and let the students sit in order of dedication/arrival rather than tenure.

Oregon's Autzen Stadium is widely considered the most raucous in college football. Here's where they put their students and band: 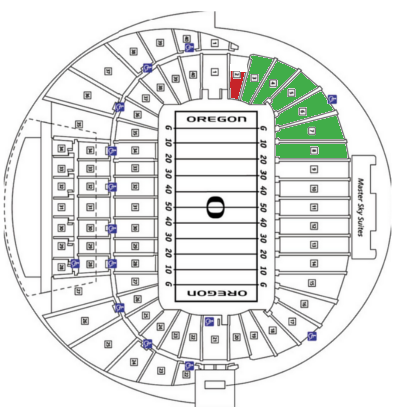 The students are all together, on the lower deck, adjacent to the band, and dominating one corner of the stadium. This gives them an enormous advantage when the opposing team is driving on that side of the field. 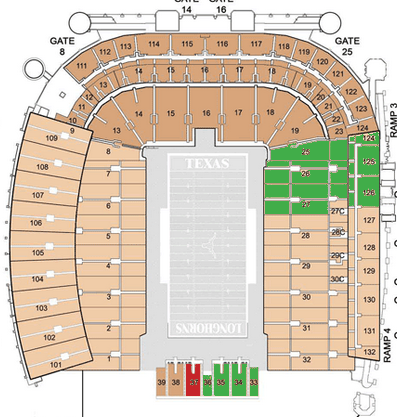 This is admittedly a rough approximation; oddly enough, it's not easy to Google the Texas student section numbers, this is just what I've gathered: grad students and seniors in the prime seats (sections 25-27) but the juniors and band sit on the other side of the stadium, under the Godzillatron (where incidentally the other students can barely hear them; this is the worst possible acoustic location for the band IMO, ensuring they sound like mud in every other section of the stadium, yet there they are) and the freshmen and sophs sit in the upper deck, which looks aligned with the grads and seniors in this pic, but in reality is anything but.

I'm guessing that moving the band, juniors, and underclassmen to Sections 17-19 would make defensive stands on that side of the field pretty intimidating, especially if the rowdiest and most committed students are the ones sitting closest to the field.

Yet that's not all Patterson can do, if he's got the coin and cojones.

Here's a pic of Autzen. Tell me what it has that DKR doesn't: 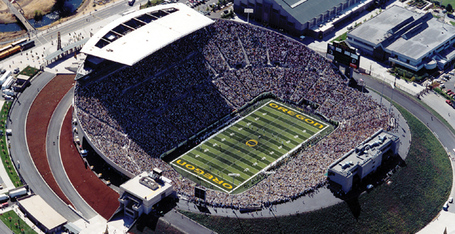 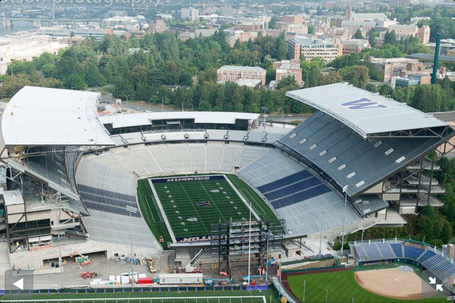 And finally the loudest stadium of them all, CenturyLink Field in Seattle: 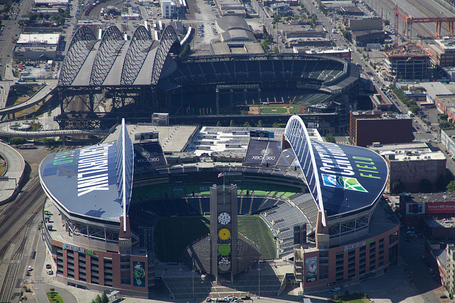 Please? Preferably a trio of parabolically-shaped ones (North, East, and West) designed both to keep the sun away from most of the fans and reflect upward-traveling fan noise back to the field.

I'm being totally serious. Back in the old cavernous Seattle Kingdome, where the roof was necessarily made of lightweight tile that also absorbs some noise, did the Seattle fans have any kind of raucous reputation at all? What about now?

If you want louder fans, make the noise you're currently producing count for more. Once people experience what it's like to produce a cacophonous wall of thunder, they'll get addicted. Ask any Seahawk ticket holder.

Just some food for thought. Let us know if you agree...or better yet, tell Steve Patterson.