Masters Sunday: A Matter of Survival

Share All sharing options for: Masters Sunday: A Matter of Survival

CBS had an afternoon of golf scheduled for Sunday, but instead, it aired the latest version of Survivor.

Everyone but Trevor Immelman is voted off the island on Sunday.

Trevor Immelman battled the wind and his nerves to hang on to capture the Masters Sunday. Immelman, like every other golfer on the leaderboard, struggled on the back nine, but he came in with a 3 over 75 to post a four day total of 8 under 280. That was good enough to win by three over Tiger Woods, who spent the day fighting his putter and the slick greens of Augusta. 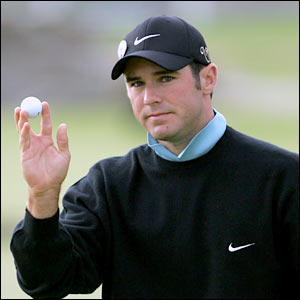 As expected, the wind gusts combined with the slopes of Augusta helped to turn the leaders into hackers from the local muny. Only four of the 44 players in today's final round were able to break par.

Woods was never able to generate enough roars in front of Immelman to place any real pressure on the leader. He had the opportunities to make a move into red numbers, but his putter failed him when it mattered most.

Tiger Woods shot an even par 72 Sunday, not good enough to get a 5th green jacket.

The defining moment for the tournament came as Woods made his one dramatic shot to send a deafening roar swirling through the wind back to Immelman. Woods dropped a 75 foot putt for birdie at 11, while Immelman stood on the 11th tee, waiting to hit. It might have rattled him, since he ended up hitting a poor chip just off the 11th green. Meanwhile Woods had a short putt for birdie on 13, which if made, would have sent the decibel level at Augusta into jet plane territory. Instead, Immelman calmly ran in his par putt from off the green, while Woods shoved his birdie putt past the hole.

Immelman built his lead up to as much as six strokes, which gave him more than enough room to cough up a hairball with a horrendous tee shot on the 16th hole that found the water. Woods meanwhile continued to ram short putts past the hole on 14, 15 and 16 until he finally found the bottom of the cup with a birdie on 18. It was too little, too late as Immelman captured the green jacket exactly 30 years after his childhood idol, Gary Player had won his third Masters title.

Immelman is a quality player who appears ready to step up to the elite level. The 28-year old was the 2006 PGA Rookie of the Year, and has won on both the U.S. and European tours. No doubt the press will spend the time between now and the U.S. Open in June building him up as the next challenger to Tiger.