There is no doubt that the Texas secondary has talent. By my count, three of our starters have NFL futures, and 3 or 4 backups will be playing with them in 5 years. There is also no doubt that their inexperience leads to some unfortunate mistakes.

If defending Tech were as simple as matching up 1 on 1 with their players, we'd win going away. Double Crabtree, and put anyone other than Robert Killebrew on the slot guy. That's like letting a trout defend a bear.

We're going to get mad schemery, though. Our guys will have to play disciplined defense. The good news is that Tech doesn't present the same mixture of run/pass that an OSU or Missouri will, and they don't have the who-cares-what-we-do-we're-that-good talent that OU does.

Earl Thomas is my big worry. We're using him as the Muckelroy of the secondary, a do-everything rover who's job is to find the ball and finish it. He will be fantastic in that role next year, but right now he's a cub.

We are going to see a lot of this. I don't know how much zone we're going to play, but when we do we can't go chasing the first thing we see like a young cub, we need to stay disciplined and deadly, like a bear. You can see like three guys apply the breaks to pursue, when at least one of them was supposed to be ready for that. I assume it's Thomas because he was the closest one to Pettigrew when the ball was caught.

Thomas's problem this year is that he's been playing street ball at times, just reacting without regards to his assignments. In a zone defense it's important to recognize clearing routes and where the ball is really intended to go. Tech runs that underneath over/under cross about 90% of it's plays, so it's something for which we should be prepared. Like a bear.

Harrell isn't much of a runner, like a panda bear instead of a grizzly. His presense in the run game is nonexistant, so we can try to defense the run with 6 because there is no option or draw threat.

When we do, though, it's going to be really important to keep control of our gaps. Tech doesn't run much so it's going to be really easy to fall asleep on their ground game. In the video, the backside LB over-pursues allowing the cutback. Muckelroy does the best job he can to clean it up, but that's asking a lot of him, as good as he is.

We can allow a few of these in the game, since Leach won't follow through with it. If we can shut it down when they do run, we can leave them in 3rd and 8+ and end drives. If we give them 2nd and 3rd and 2, we're going to have a tougher time.

Orakpo is a killer and beared down on the run against OSU. He stopped several plays on his own. Miller is as good as they come and Houston has the quickness to play against the wide splits. The key is going to be how well Melton plays, as OSU ran to him about 80% of the time. We might see a lot of the squeezed down 3 man front, which we didn't get a lot of against OSU. Control the middle and let your speed pursue to the outside.

This play isn't something we'll see against Tech, because there aren't two guys who will demand double teams. But in this case the play serves two examples. First, look how we had to line up: 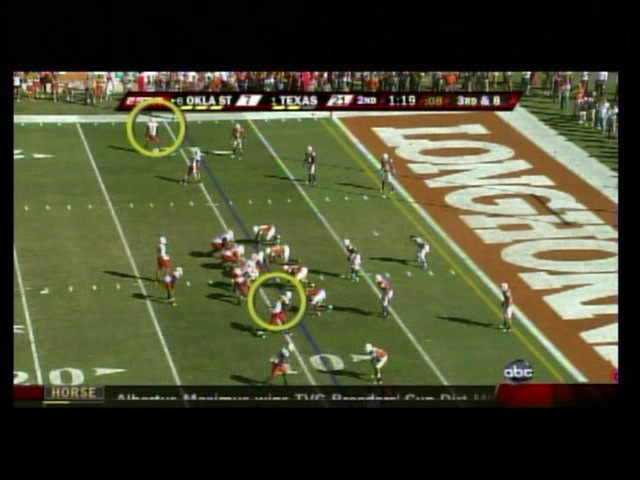 The only person inside the hashmarks is a LB, and a poor LB in coverage at that.  Tech only has Crabtree, so we can keep a safety in the middle of the field. But in this instance we don't have that.

Second, we don't hedge at all. Man, no free safety, the middle of the field is going to be wide open. Norton is too aggressive in his coverage. If he drops back first he might give Robinson some pause and allow Curtis to catch up and get in a better position. If Robinson wants to check down to Hunter, let him. They'll get 6-7 yards and have a 4th down situation. Don't make it easy -- don't bring a knife to a grizzly fight!

As it happened, Robinson really had no read. He was looking to Bolling from the snap. We do that on Saturday, we are going to be in for a tough game.

Brown also needs to know where his help is -- a rookie mistake. He can play inside breaks because he has help to the outside. This is the kind of stuff we'll get eventually, but Tech is going to have a few catch and runs because we'll have people out of place.

We'll just have to bear it.