Lessons you learn when losing.

Share All sharing options for: Lessons you learn when losing.

Lesson one: Bottle up your anger. 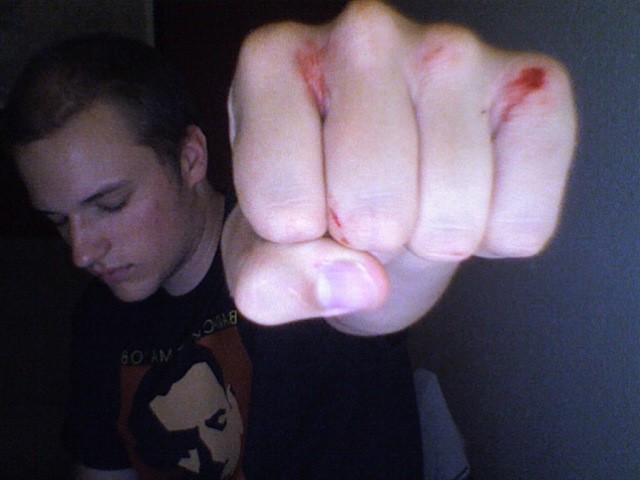 That is the state of my fist right now (the black panther pose is in protest of the I formation). Think that's bad? You should see the other guy.

That would be my bedroom door, circa seeing Kindle JOG after Harrell in the 2nd quarter, who then converted a 2nd and very long.When Gideon dropped the INT 45 seconds after I re-tuned in, I broke my remote. On the next play I nearly threw my chair through the window. You think I'm joking. I'm not.

Lesson Two: It's hard to beat 4 good teams in a row.

We rose against OU, peaked against Missouri, and have fallen since. The bad game was bound to happen at some point. I was hoping it was against OSU. It wasn't.

Tech game out guns blazing, we came out like a shy, ugly debutante. I guess it's harder than it seems to play at your peak for a solid month.

You know what? We're 8-1 in a season where had 3-4 freshmen DBs on the field against OU, Missouri, OSU and Texas Tech. It'll happen. Blake Gideon is off my Christmas card list, though.

It is legal in this league to grab your opponents jersey around his shoulders and hold on for dear life no matter what direction he goes. Why we don't do this is beyond me. It's been legal for 8 years now, ever since it got Frank Romero drafted. I don't consider this poor officiating, even though it is, I consider this us not taking advantage.

Lesson Four: Ben Affleck is not a cure for the blues.