Spread? Sprawl? Get it? Tell your friends.

It all starts with Tim Tebow. There are two kinds of QBs -- facilitators and play makers. If you asked 1,000 media members in which category Tebow belonged, the 800 or so that can speak through their drool will tell you "play maker". If you asked Kirk Bohls he would throw in a similie. Those 800 would be wrong.

There is nothing explosive about Tebow. He's got decent speed but he's not quick, and he's not overly accurate. He's not in the Chris Weinke/Jason White club of guys who literally couldn't suck hard enough to hold their team back because of everyone else around them, but he is overrated. Local sports radio dolt AJ Hoffman said -- all on air and in complete earnesty -- that Tebow was one of the best players to ever play the game. This is not only grounds for removal from the radio via public firing, but also grounds for removal from Earth via shotgun.

Tebow has the mobility of a tight end and a sllllooooowwww release. He is accurate within 15 yards and has nice touch on the deep ball, but UF relies on getting guys wide open downfield rather than hitting them in stride like Sam Bradford does.

Oklahoma will run out 9 guys faster than Tebow on Florida's first play. OU gets in trouble on defense when you make them commit more resources than they want on the QB or the RB because their defense works best when they can gang up on the WRs and confuse the QB. The spread of the . . . spread has made Bob Stoops shift his base defense from the 4-3 to the nickel, and they've generally kept two deep safeties where in the past they'd have a SS in the box more often than not. Or, at least more than they do now. These days you almost never see it.

That's what you'll get more often than not, and I don't expect that to change against UF. Partially because Tebow doesn't scramble all that much and partially because I'd bet that Stoops and Co. are comfortable just letting the pursuit deal with it. 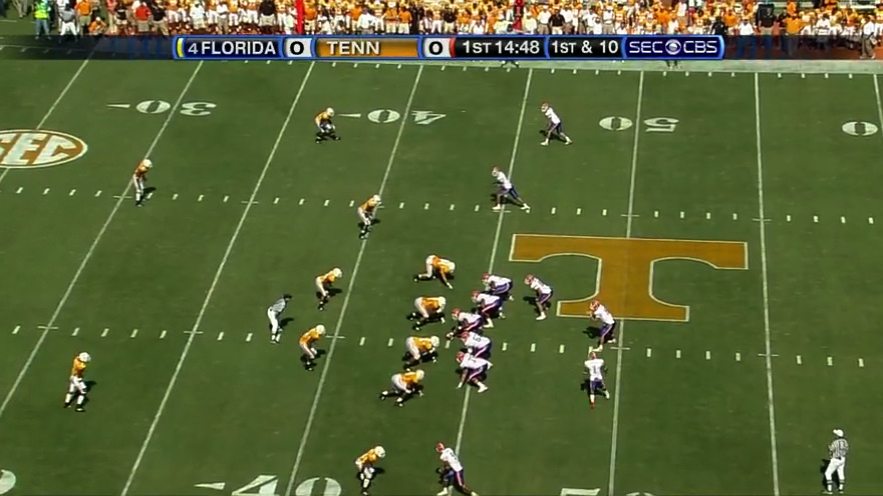 That is how the other UT lined up on the first play of their game, and that is how OU spent the last two years playing us. I'm guessing UF is going to see a lot of this. That is respect for Florida's speed, and pretty much everyone lined up that way.

Tebow isn't a guy who have to scheme for in the run game, unless it's 3rd and 1. He's a lot like Colt in that regard. He'll tear up A&M, but if you have any speed on your defense, let him run. You'll catch him before he gets 4 yards, and the real dangers lie elsewhere.

So why does he have the Heisman? Well, that the sports media are enormous douches in every sense of the word is one reason why. They don't watch enough games and can't comprehend what they do see well enough to rely on them as judges for anything. The other reason is because he makes great decisions.

There are two separate aspects to UF's offense (There is one aspect to OU's defense, which is Brent Venables clenching his jaw after another TD and hoping Bob Stoops doesn't beat him mercilessly after the game), and in order to be any kind of effective a QB has to be able to accomplish both of them. There is the west coast passing scheme at which players like Chris Leak and Alex Smith excel, and the option game, at which Mountain West defenses excel.

Tebow is an OK runner and an OK passer but he handles both aspects so well that it doesn't really matter. He's the new generation's Josh Heupel or Ken Dorsey. He isn't going to juke 14 guys and run 70 yards and he won't make passes no one else can, but he doesn't really need to. The scheme and the speed do the heavy lifting for Florida, and all they need is a shepherd to make sure the ball gets to where it needs to go before the wolves come.

Their packages themselves are simple. They've simplified most of it to fit their needs -- this isn't Tom Osborne we're talking about here.

They have the simple stuff like a speed option, even if they do throw those goofy Meyerisms in there like the reverse packages:

Zone blocking, read off of one guy. Easy. They've got the old G series in there:

Tebow reads the end and either follows the lead blocking guard, or pitches and the guard acts as a seal for the pitch. There aren't 9 guys in the front so it's all made super easy for Tebow. He can slice up athletic SEC defenses like they were third world penii.

My favorite package of theirs is the shovel option:

Count the ways they stress the front. A reverse to hold the pursuit, then three options coming of the other side, except no one ever covers the TE. Why would you? David Hernandez is every bit the runner Tebow is so it's a brutally effective play. With OU's pavlovian desire to fetch the ball will almost certainly leave creases for this to work.

Another thing you'll see is something we should all be familiar with by now, the wide splits. We bitch slapped Missouri when they tried this, but UF's offensive line is athletic as hell, almost to a fault. They can pull this off:

There is nothing spectacular going on. Meyer stressed the defense and Demps, being the tiny, fast motherfucker that he is sprints right through. OU is masterful, and they always have been, at textbook run defense. Making them face unique situations where they can't follow the rules is how you beat them. UF should spread them out any way they can.

They do the normal stuff, too, like the zone read. As usual, they do it unusually:

They find the DE regardless of where he is on the line and run it off of him. It's the veer without the pitch. It's a more sophisticated scheme and I have to admit I am getting a little angry right now. They even have my pet play:

I want to have Meyer/Mullen babies.

How well all of this will go over is an unknown. OU has active but not always disciplined LBs and with Granger out, it's unknown if they'll have a plugger in the middle. Florida is the ultimate grind-it-out team, so OU will have to create negative plays. How well they limit Florida will be solely determined by how well they penetrate. Florida's OL is built for speed so it won't be impossible. It's going to be a game long struggle to see who beats who to the spot.

The spread has given birth to a new kind of running play that almost entirely removes the OL. The plays themselves are closer to screens, but their intent is the same as an old fashioned handoff. Would you rather give Jamaal Charles the ball and crash him into 14 gentlemen larger than him, or get him into space so he can use his talents? Herm Edwards knows.

That might go in the book as a pass, but it's not. You can tell by the TE. He's not running a route. If the safety doesn't tackle Harvin, that's a touchdown. OU is a pretty good tackling team, but it only takes one missed tackle. This is the type of low risk/high reward play that is so prevalent now, and Urban Meyer does it better than anyone else in the game.

That's what why the spread and he west coast work so well together. Quick, easy pass to a game breaker leading to a game breaking play. There is nothing you can do against that in the scheme. If UF is going to send 5 guys out, it's really hard to double one guy, and Florida puts Harvin is so many places that it's tough to know where he'll be. And who double teams swing routes and quick outs? Nobody. That's why his YAC are what they are.

There is also the traditional west coast staple: running towards an open spot and stopping. Seems easy, but it requires a read for two players, then setting up the timing and the spot. It's pretty difficult to sync all of that enough to consistently move the chains, but Florida does it very well.

OU has pretty good corners so we may not see a lot of Harvin on the outside. But Urban finds his ways. The similarity to both plays is that all the WRs are on the right. Harvin motioned out from the backfield on this play, and stayed in it in the swing screen above. LSU kept both it's corners over the trip WRs, and OU does the same thing. If you treat Harvin like a WR and put a corner on either side, then the strength of the formation has the mismatch. Treat him like a RB and he'll kill you on short passes. Put a bunch of WR on the field and Florida will run through you.

The marriage of all the aspects is the real key behind the scheme. We run a similar offense, in theory, but we don't have Urban Meyer calling plays. We don't take advantage of the defense in any purposeful way.

For instance, here is that first speed option again:

At first glance there is nothing spectacular about this play. What's interesting is the circumstance. Normally the OL will leave one guy unblocked -- the guy the QB is reading. Because of the west coast-y passing game, the defense has to account and stand in the general vicinity of every skill player lest they get screened to death. Because of the speed, they need to keep safeties back.

So what's so special? Look at the front. Nobody goes unblocked. The only reason Tebow had to pitch at all was because the DE beat Hernandez's block. It was 7 on 6 up front if you count Tebow as a de facto blocker. Had LSU adequately outnumbered the run, Percy Harvin was going single covered:

That's why the spread is so dangerous and that's why Meyer is the best play caller in the game. Tebow never audibles. Meyer is the mad scientist on the sideline.

Ever since he got to Florida he's been running a mutant version of his offense -- basically all the goofy fringe stuff -- because his QBs couldn't handle what he did at Utah. Chris Leak was strong in the short passing game but not much of a runner or deep passer, despite being black. Tim Tebow was a first year starter that didn't give you much in the run game and was still figuring out the passing game. They mostly just pounded him up the middle until they could get something deep. Yeah, he won a Heisman (that he didn't deserve), but he's a much better player this year. Meyer is finally running his offense. Spread you out with base personnel and let you decide how he's going to take your lunch money.

So how will this work against OU? Hard to say. The underneath passing stuff will be there all night, but the run game will be hit and miss because it's been OU's strength forever. The question is how well Florida can scheme OU's defense apart, literally. If they can spread the field then the Oklahoma LBs get infinitely less effective. No reason Florida shouldn't spend all night spread out in the 5 wide look, even with base personnel.

Unlike Vince Young, Tebow isn't someone you can say "go win us this game" and he'll do it. It's a team effort at Florida. If one thing isn't working then none of it works. OU can usually stop one thing. That's why I think Oklahoma wins, 38-24.