An Oklahoma fan decked out in crimson with a goatee and the leathery skin of an oil field services worker, with the obligatory Marlboro stains on his fingers and teeth, spends the entire pre-game sprinting around the stadium concourse pointing to his national championship game participation t-shirt and screaming Boomer Sooner. We seem him make at least three passes. He's so ridiculously stupid that even the Ohio State fans avert their eyes and refuse to return his high fives. When an Ohio State guy with face paint, a mohawk, wearing fake shoulder pads refuses to acknowledge you, you're in a low place in the hierarchy of college football fan.

In Westgate pre-game, the Border Patrol sets up a recruiting booth. Perhaps the CIA will be at the Final 4 recruting Farsi speakers. The Patrol chose their best and brightest - an estrogenic Louie Anderson doppleganger with an absurdly high-pitched voice and Charlie Weiss front hump, a doughy Latina midget with a hair bun, and two dudes straight from Super Troopers. Later, I see one of the Super Troopers standing in the parking lot leaning against a special Border Patrol tricked out Hummer, trying his best to attract attention while appearing unconcerned. He has mirrored sunglasses on and his arms are folded specifically so that his biceps look bigger. Uncle Rico got a badge.

During the outdoor pre-game festivities, a pair of Phoenix Fire Department guys riding Segways sporting bike helmets motor by - clearly the 60 degree day is too arduous for walking and I needed this extra piece of visual data to confirm that my country is truly screwed. A friend suggests that we approach the Border Patrol booth and say,"Not trying to start anything here fellas, but we were just talking to the PFD guys on the Segways and they said that Border Patrol are straight-up faggots. Thought you should know..."

In Westgate watching the Longhorn band pre-game, a botoxed older woman dressed twenty years too young approaches our group with a dorky male sidekick and they begin pitching a calendar of...local Phoenix grandmothers in string bikinis. She is Ms September or something. She assures us that all of the forty and fiftysomethingish women in the calendar are "biological grandmas" and she continues to return to this piece of vital information as a major selling point when we ask why we would possibly want this material. Three times she offers a blank look at our polite rejection, taps her bright red acrylic Flo-Jo nail on the photograph of Grandma December's breasts, and then offers the assurance, "She is the real thing - a biological grandma!"

A man wearing a MICHIGAN IS OUR BITCH AGAIN shirt shakes my hand as I'm waiting to buy a Coke. He offers that he respects Texas as "a class program, just like Ohio State." I nod in collegial fashion and chuckle at his t-shirt. He shrugs and says at least he didn't wear his ANN ARBOR IS A WHORE! tee. I commend him for this tasteful decision.

Down 6-3 during the early 3rd quarter with a break in the "action", the camera begins showing cute babies in the crowd on the big screen. I am irritated. I erupt with, "I would throw that baby from the upper deck in sacrifice to the football gods if it meant Longhorn victory!" I am initially concerned with the reception for my outburst, but I receive several nods of approval. We immediately go up 17-6. When we go down 21-17, a hot girl in a short orange dress and cowboys boots standing in front of me turns around and suggests that I renew my offering to the gods. 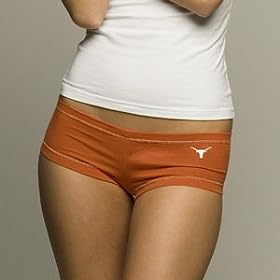