A quick tour of the NFL combine thus far, which included some promising performances by Longhorns at WR/RB (covered in my next post). It's easy to inappropriately fixate on these numbers, but they do have some significance - particularly when an athlete is able to address a negative preconception or when pressure causes the inevitable flake-out from a well-regarded prospect.

As always, if you're percieved as a great football player, testing adequately is sufficient. If you're perceived as a good college player with no pro upside, you need to throw up some numbers to make GMs reconsider their assumptions.

Click on bolded position for the breakdown on each participant.

Alabama's Andre Smith demonstrated great flakiness with his comments that he wouldn't test because he hadn't prepared and subsequently going AWOL, but he has the ability to correct that at Alabama's pro day. He is still the best OL in this draft. As Brian Billick pointed out (I think I'm one of the few people that likes Billick) the combine is nothing more than an open book intelligence and motivation test and Andre Smith failed both. 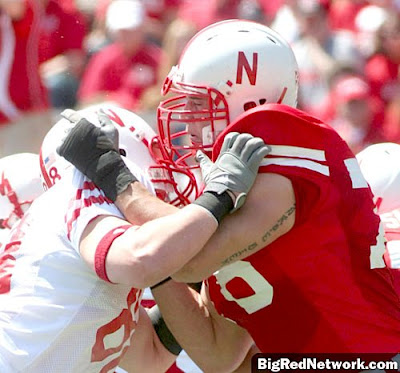 Nebraska's S&C program was a big winner. OT Lydon Murtha measured in at 6-7 306 and busted off the only sub 5.0 40 OL yard dash with a blazing 4.89. Husker OG Matt Slauson went 6-5 316 with a 34 inch vertical - better than several high profile skill position players. Both Huskers forced GMs to go back and re-watch their tape.

OU's Phil Loadholt physically looked good - he went 6-7.5 332 - dropping 25-30 pounds since the Fall, but his drillwork did little to address his bad feet. Future RT or OG. Orakpo cost him a lot of money.

OU C Jon Cooper did fine, but he was the second smallest OL at the combine and the Pac-10 centers from Oregon and Cal are miles ahead of him as football players. The other Sooner OL - Braxton and Robinson - lost some weight, tested adequately, and guaranteed their draft status.

Baylor's Jason Smith tested well enough to seal his position as a sure Top 10 pick. The kid has beautiful feet and that doesn't show up in traditional testing - but the film doesn't lie.

Tech's Louis Vasquez (6-5, 333) threw 225 up 39 times. He wisely skipped out on running the 40 as he would have put up a smooth 5.8. The average rube will talk about Vasquez as the "strongest OL at the draft" but you need only see him block to know that explosive power and bench press, although related, are cousins at best.

If I'm a NFL GM who needs QB help, I work to unload an early pick for more picks and target Josh Freeman in the later rounds.

Stafford and Sanchez appear to be fighting it out for the top spot, but I'm still not blown away by either. Stafford did help himself in showing that he's more athletic than his body suggests and the rocket arm allows a GM to do a lot of optimistic projection.

Josh Freeman is the best QB value in a weak year. 6-5.5 248 with good weight distribution (he has really re-made his body); his excellent vertical and broad jump tell you the kind of power he has in his hips and legs. His feet are more than adequate. This is a guy who can stand strong in the pocket, shrug off pressure like Roethlisberger, get his feet right, and then fire a dart. He'll extend plays with his strength and he can take a beating - as evidenced by his time in Manhattan.

Stephen McGee looked decent throwing the ball. Injuries, bad coaching, and a terrible offense really hurt his development, but there's still something there from Burnet High School that hasn't been totally eradicated. Pity.

Pat White is interesting. He has a weak, accurate arm and he's 6 feet even, but he throws a catchable ball, is a great team guy, and Seneca Wallace suggests that there's a viable future there as an affordable backup who can win games for you. If he fails as a QB, you still have a sub 4.5 receiver.

Graham Harrell, who it was argued was the first example of a Tech QB who wasn't a system guy, proves to be what I've said all along: the ultimate system QB. Aside from being a turd in the pocket, he put on bad weight over the last three months to correct the perception of him as fragile. Consequently, he measured out at 6-2 223 but with a sweet 5.07 40. Bad arm, mentally weak, but incredible production in his system; Mike Leach could get All-Conference production from a junior high girl.

Chase Daniel will be drafted out of pity.

South Carolina's Jared Cook made himself some cash. He was a productive if slightly underutilized 1st team All-SEC guy, but his combine workout just made some NFL GMs alter their draft boards: 6-4.5, 246 4.50 40, 41 inch vertical leap. I have no idea if he can block, but those numbers are freak territory.

Don't get caught up in Pettigrew's slowish 40. No one in the league can stop that giant animal from catching a 8 yarder over the middle and he has the ability to humiliate a quality NFL OLB or DE in the running game.

James Casey from Rice did really well. He's an older guy without much physical upside, but I think he surprised people with his overall athleticism and his hands are really good. Great Chris Cooley style H-back.

I was also impressed with Dan Gronkowski from Maryland, who I was not familiar with. Good hands, gets in and out of his routes well, more than adequate physical specs across the board. His drillwork was impressive.

I'd argue that there are eight to ten high quality NFL TEs in this group, though only 2-3 of them are every down players with a real blocking upside. Nice year for the position overall.