Basketball Next Year: How The Pieces Fit

Share All sharing options for: Basketball Next Year: How The Pieces Fit

I want to talk about the new blood coming in, how it will be infused into the body of our current roster, discuss the actions of our platelets as they staunch the wound of our bleeding while white blood cells race to battle the infection of poor shooting and....I've run out of blood metaphors.

We'll talk about the roster with and without Damion.

J'Covan Brown is the Easter Bunny.

The contrarian in me loves that the European is the spectacular athlete while the NBA genetic product is the heady, disciplined shooter. We're going to play a two-headed point guard next year and that hydra will give opposing defenses completely different looks. Each player has fatal flaws in their game that prevent them from being elite point guards; in fact, each has exactly what the other needs, but we do not have the technology to meld them together into Jai Doge. Yet.

Balbay is going to give us pace, creativity, defensive stops, the ability to pressure passing lanes, and poor shooting. He does for others and takes great care of the basketball. Defenses will sag on him like Ricki Lake's teats. His faults are obvious, but a lot of coaches would kill for this guy to give them 20 good minutes a game.

Lucas is a heady guy that can get in the lane with his savvy (but rarely finishes there unless it's a little float shot) and, like his older brother, is deadly at draining the open three. He's physically weak and a below average one-on-one defender, but he can make savvy team defense plays. Nor is he a classic creator. What he does do is think like a coach, understand game situations, and make basketball IQ plays.

I'm not a total fan of his game, to be truthful, but I think he has real value in complement with Suleyman the Magnificent. Yes, I know he was selected a McDonald's All-American, but I think it was part of a promotion for sending in a bunch of french fry receipts.

Bottom line: our point guard play gets better. I'd play each 20 minutes a game and in sum total you'll end up with a combo at point guard that goes for 13 ppg with 6-7 dimes. Jai gets the crunch time minutes in close games.

Harrison Smith will provide scrappy spirit and the ability for Barnes to mock starters by replacing them with him when they piss him off. He's Ian Mooney.

Avery Bradley starts. I don't know if it's game one, but certainly by conference play. Avery possesses a unique, strange game once though to be extinct since the graduation of Maryland's Juan Dixon. Once upon a time, in a fundamental world long gone, there was a time when guards had something called "a mid-range game."

The "mid-range game" consisted of a guard driving to the basket and then unexpectedly rising 15 feet away to shoot a "jump shot." I've seen old grainy footage of Joe Dumars doing this in playoff games, but I know that anyone under 25 is going to call me a liar. Impossible! You can't just elevate out of a drive while under control and shoot! It's not a dunk! Or a three pointer! 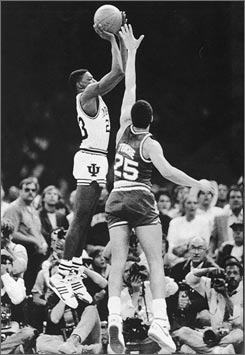 What manner of wizardry is this?

Bradley is a lockdown defender who excels at shutting down elite scorers on the AAU circuit the way Michael Moore gets shut down at the Playboy Mansion.

He's a major tough guy as well. Like Golda Meir.

Justin Ward Varez Mason, who are the same player, will play comfortable roles as lockdown defenders, the third guard when teams go small against us, sneaky offensive rebounders, will steal a few minutes at 3, and act as general troublemakers. I think Mason in particular will benefit from going back to his traditional role. Could Varez be a transfer possibility if he can't look beyond next year's diminished minutes to a junior and senior year where he'll be a key player?

I'd love to have a pure shooter off the bench instead of two redundant defensive stoppers. I'd also like to own an ocelot. But neighborhood associations frown on exotics after a pack of sugar gliders mauled a soccer Mom in Tarrytown. So my point is this: love the one you're with.

Yes, he actually is Straight Outta Compton. The nice part.

Much like the fabled "mid-range game", there are some teams rumored to possess a creature known as "small forward" or a "3." No, not 6-4 Brandon Mouton or 6-2 Justin Mason. No, not a PF playing SF like Damion James dribbling off his knee when he faces up on someone.

I'm talking about a 6-6 player who can dribble, shoot, drive, rebound, slash, cut, defend, finish in transition, and is too big for smalls, too quick for bigs. I'm talking about Jordan Hamilton. He's going to play for us. He's good.

Shawn Williams is another one of these unicorns. He's not the pure talent that Hamilton is, but he can drain 3s and he's a good four year player. It will be interesting to see if Barnes would prefer to spread Ward and Mason's minutes to 3 backing up Hamilton to allow the redshirt, but my guess is that he plays right away.

If Damion James returns, he and Barnes need to reconcile themselves to his playing PF. I'm sorry that SF is what the NBA needs Damion to be, but that doesn't serve us at all. If he returns, we're getting a world class rebounder and a guy who, when guarded by the other team's PF, does have the ability to face up and get to the rim or sink an open three. He'll give us 15/9, no worries.

Big Dex is going to wreck stuff next year. Surrounding him with multiple players who can take their man off of the dribble and force a rotation will guarantee him three dunks a game just by standing on the low block with his hands up. Not to mention his developing post game.

Dexter has beautiful hands and his ability to finish around the rim is only going to increase as he learns to use both of them and play the angles under the rim. If he can give us 25 minutes before he fouls out, we're looking at a 14/10 guy who can also body up the other's team big man scoring threat and frustrate with his strength and immovable base. Ask Blake Griffin and Robin Lopez. I love Dex and I'm really excited to see what he can be.

Gary Johnson gives us a tough guy game with some ability to face up and create his own shot against bigger players. The elbow jumper will continue to come and he's getting better at finishing off of his powerful drives. If Damion comes back, he's an important sixth man. If Damion doesn't, Gary can replace his production.

I like Alex Wangmene's game and he seems likely for a medical shirt if he wanted to extend his eligibility. Alex is such a powerful kid and he has a great wingspan. Both allow him to defend much taller players and finish around the basket. Alex was developing a real game beyond power moves late last year and I think his upside is outstanding. I don't want to see a transfer.

Clint Chapman shows you just enough "Where the hell did that come from?" ability such that you can't write him off. He's a legit 6-10, crazy long, and is learning to finish. He's a rebounding liability against physical players, but he covers ground like an enraged goose. He has a redshirt season available to him, so a transfer is a very realistic possibility if he wants to get back to the Pacific NW and be the man at Oregon State.

Matt Hill missed all of last year and though he can do some fundamental things for you rebounding, blocking out, playing OK defense, he's an offensive liability. He is a transfer possibility.

Overall, this is pretty nasty frontcourt, no matter how you slice it. With or without Damion James. We'll have guys who can finish, defend, and we can mix and match a lot of components to match up to very specific problems. In an ideal world, we'd have one big man who can step out and hit a 3 pointer, but I'm not opposed to the old fashioned three point play of a Dexter Pittman finish with the foul.

With respect to transfers, if Damion James wants to come back or if J'Covan Brown manages to discover an Algebra class on his transcript that he in fact attended, we'll need one to occur. If we had to have one, I'd sacrifice, in order of desirability: Hill, Chapman, Wangmene/Ward (tie).