UT President Powers: Athletics In Trouble Thanks to 10% Rule

Share All sharing options for: UT President Powers: Athletics In Trouble Thanks to 10% Rule

University of Texas William Powers Jr. painted a bleak picture Wednesday in front of the Texas Legislature when it came to admissions for the Austin campus. Powers testified before the Texas Senate Higher Education Committee that the law that guarantees admission to a student graduating in the top 10% of a Texas High School is quickly making UT a closed campus.

Powers told the committee that entering summer classes could be canceled, that students from other states and countries would be denied admission, and that eventually athletics – including football – would have to be abolished..

Powers testified that if the law is not changed, that by 2013 UT will be forced to reject all Texas high school graduates who are not in the top 10% of their graduating class. 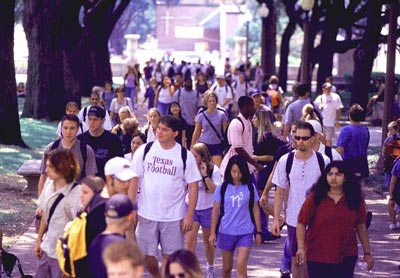 State Senator Florence Shaprio, R-Plano, has introduced a bill that would modify the 10% rule for admissions. Under the proposed legislation, UT would admit Texas high school graduates begining with the top 1%, then the top 2% and so forth until half of the incoming class was filled. The rest of the class would then be selected through a process that included various factors, such as grades, leadership ability, and extra-curricular activities.

The bill was passed out of the Senate Committe and sent to the full Senate for consideration.