Share All sharing options for: Mike Sherman Lashes Out 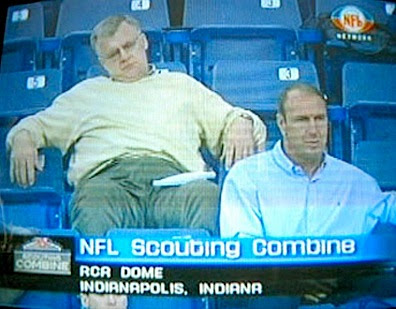 I appreciate this opportunity to make my voice heard. I want to address some of the false concerns that have been aired about me and do so in a forthright monotone manner.

There are some who say I don't have an identifiable personality.

I don't know how to react to that criticism other than to look at that person without expression and unblinking eyes, take off my eyeglasses, and then slowly and methodically clean the lenses with a handkerchief.

I have a personality. A vibrant personality layered with complexity and depth. Sometimes I think the shock I receive upon touching a car door handle on a brisk day in March is an expression of my internal electricity.

I can prove it. I have a joke for you.

(You say who is there)

It is I, Coach Mike Sherman. I already told you once. You are very forgetful. (playful shoulder punch)

It's funnier when you do it in person. I do this with recruits during in-homes. Oh, how they laugh. Uncomfortably. Then we'll work a crossword puzzle.

I'm often asked: Coach Mike Sherman, what are you going to do to restore the rich and storied history of Texas A&M football...that occurred entirely between 1985 and 1998?

Easy answer. I don't even need notecards for that.

First and foremost, I want players who want to be Aggies. Right now the state has three of them.

Failing that, I would like players that aren't opposed to being Aggies; specifically after seeing their dream of playing for Texas, OU, or LSU shattered into a million pieces by scholarship limits.

That's the kind of burning passion I'm looking for.

Next, I want a talented, big, fast football team. Preferably one provided to me via a professional draft of some sort. I don't want to have to learn to work a "text machine" or hobknob in living rooms like a sultry whorehouse madam.

I want toughness. A team that reflects my identity having grown up in the hard-knock New England suburbs. Yes, I'm a proud graduate of Algonquin Regional High School in Hyde Park, Massachussetts and Central Connecticut State. There were kids in my high school that smoked.

Try experiencing a rural Connecticut winter's day when you've left your mittens at the bingo hall. Do you walk back the three blocks to get them? Or do you press on four more blocks to the diner near Main where they're serving 99 cent bottomless cocoa? Remember, it's very cold. And The Kiwanis Club may have taken all of the booths, which are the warmest seating.

I'm teaching life skills with these sorts of scenarios.

You do get the mittens, IMHO.

Some speculate that I'm too "old" or "out-of-touch" to get it done in a fast-paced environment like College Station competing against cutting edge communities like Ames, Lincoln, Stillwater, and Waco.

That makes me laugh. Inside. Where no one else can see.

We have Wonder bread, salisbury steak, and catsup here too you know.

Some question my napping schedule (please raise your hand if you're NOT refreshed by a daily four hour nap? Right. And the defense rests.) or the fact that some members of my staff cannot control the flow of their own urine, and have Filipina caregivers.

Look, Tom Rossley can control the flow of his own urine. So can Joe Kines. It flows. The question is stopping it. They both drip pretty consistently, like the drizzle nozzle in a guinea pig cage. There are workarounds. In cooperation with the vet school. I'll leave it at that. HIPAA.

As for "caregivers" - nonsense. They are no such thing. Sunshine and Esmerelda are olive-skinned Aggie family. It's not a caregiver's job to keep medicine schedules, find lost car keys, help feed pigeons in the park, and lead seated aerobics to increase blood flow and curb disorientation.

All of this is an attempt to discredit me and my staff as out-of-touch and incapable of relating to the youth culture of football in the ways necessary to effectively recruit, specifically Young Gentlemen of Color. What nonsense. From my earliest days living in Hyde Park and in rural Connecticut I was exposed to many cultures and ways of life: investment banker, insurance executive, patent attorney, tennis pro.

We had a Portugese grocer, for Pete's sake. He was so expressive and colorful, always talking with his hands. Heck, I coached in Green Bay, Wisconsin - a dizzying kaleidoscope of Nordic ethnicity. Try telling the Olafsons that they're Swedes rather than Norwegians. Race riot.

Perhaps it would surprise you to know that I am a keen admirer of The Negro Jazz. True, I do not like the edgier jazzmen like Dizzy Gillespie, Louis Armstrong, and Scott Joplin, but not everyone can be the Clicquot Club Eskimos.

I can talk jive and hoo-doo with the cats. I talk with my players about Nipsy Russell, Sammy Davis Jr, Flip Wilson - all of the greats.

Where did the notion that I cannot relate to the Modern Negro Athlete come from? Radicals like Greg Gumbel?