Share All sharing options for: NFL Expansion And Relocation Sites

According to the mathematical modeling (using fairly reasonable, common-sense data) found in Location Model in the National Football League: Predicting Optimal Expansion and Relocation Sites the most likely sites for a new NFL franchise or relocation of an existing NFL franchise are, in order of predicted probability:

First methodology failure apparent: did not factor USC as an existing professional franchise.

Putting a NFL franchise in the Greater Los Angeles Strip Mall Contiguousness is a no-brainer. This hole in the NFL's portfolio gapes like an awed Okie's jaw when confronted by a van with a kickass desert mural on it. The real question is whether Angelenos care enough to support a franchise. After all, the NFL and the team-focused hysteria it engenders detracts from the Angeleno's greatest and most overwhelming obssession: themselves.

Namaste NFL - I salute the divine in you. Just how is it that you propose I do my hatha yoga and fennel seed colon cleanse in time to make it to the stadium through four hours of traffic driving nine miles in my leased Mercedes? We need to process this so that I can reach resolution and closure. I feel like you're not owning this and that I'm being minimized as a sentient spirit-being. Also, I'll blow you for $1,000. 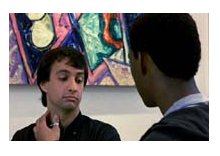 If I were the owner of the LA franchise, I would have bouncers select entry into my stadium from a milling crowd behind velvet ropes based on dress, hotness, celebrity, and level of feigned indifference. The cover charge is the price of the ticket. Creating a certain level of contempt and exclusivity for your customer is the only way to win a Southern Californian's heart.

You're not getting season ticket holders past New Braunfels. Could this work with the right owner? The answers is yes, and, anticipating your follow-up - Mark Cuban.

I could see this. Strong civic spirit, pro-business environment, wildly growing population, the ability to have Raider fans excommunicated. The potential for conflict between general pro-business LDS interests and the LDS oxes that could gored at BYU and Utah concerned about a NFL team supplanting their college sports community primacy could lead to a power struggle straight out of Big Love. Compound drive-bys, boiiii!

Would a black NFL player prefer to play for the Salt Lake City Celestials or the Buffalo Bills? Tough one. I want all of you to pose that question to the friendly black IT guy at work. Unless you are that guy, in which case, what's up with me not being able to download Itunes apps through the company server?

Could they get a new franchise? Absolutely not. Could they get the Raiders one day? Of course. Al Davis is constantly scouting out any community with sewage infrastructure, reeking of desperation, and a willingness to endure pre-game tailgates that make a San Quentin jailyard seem tensionless.

Boy golly - who'd have thought the Raiders would move to Dubuque! Hey, Dad - let's move over here near the bean dip - the Southern Mexicans are making a movie on the Aryans. Give me those packs of smokes, I need to parlay with the Jamaicans so they don't rape you.

I predict that there is a 31% chance that Al Davis moves the Raiders to Knoxville just to harsh Lane Kiffin's world.

They can't land a new franchise. But if a bleak Rust Belt team housed in a city with overpensioned whiny auto-workers wants to move to a slightly less Rusty city, then this is fine. But I don't see the logic. It's like dropping Roseanne Barr for Rosie O' Donnell.

The MOST VULNERABLE existing markets are:

Strikes against Buffalo include arguably the least attractive women in the continental United States, a destitute blue-collar economy, bleak and brutal cold, no TV appeal, and - most damaging of all - Chris Berman, Bills superfan.

As New Orleans contracts, so too does it appeal as a major sports venue.
Most Louisianans grow up with the notion that money is best inherited or stolen and their economy reflects that. This is an economic infrastructure built on natural gas, tourism, and bail bonds. Once the collective memory of Katrina diminishes, Dem Saints will hoof it Modell-style. Confused natives will expose their breasts and throw beads at the parade of trucks passing by... How do they have a franchise? Seriously. Did they find Tagliabue in bed with a dead girl or a live boy? I want to know how this happened.

The most obvious omission from all of this is Toronto. It's a big market, but I can't comment knowledgeably enough about the Canadian passion for football of the four down, Doug Flutie-isn't-a-star variety; but I doubt anything could rival their love for the Maple Leafs and Alan Thicke.

What do you think?