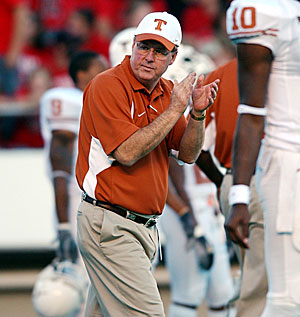 On expectations of the spring game: There are some young guys who have not been in that setting very often, so we want to see them with the crowd there and the band there, coaches working from the boundary and not shouting assignments out to them and see what they know and how they'll react to that situation. We want to play a lot of different kids, a lot of different combinations in that setting and we're going to be looking at certain things, certain plays. Mainly, we just want to go out and function and compete.

Function and compete. This sounds like the recipe for a guy who just took his Viagra before heading to BW3 trivia night. C'mon Greg, say that that you want Malcolm Williams to knock Jared Norton out on a crackback block. Say you want to score on Muschamp like it was prom night. He talked shit to you in his press conference! Screw that Muschamp guy.

Ah, he mentions the crowd and band factor. I love that some of our players will wilt because of the presence of a tuba. "Man coach, I can't concentrate - I keep hearing percussion and fucking woodwinds!"

On the depth within the wide receivers: When [Jordan] Shipley gets back, we probably will be as deep at receiver as we've been. And last year, we were pretty deep there. Last year, I thought it was probably the deepest overall group that we've had. With the movement of John Chiles out there, he's really improved out there. [James] Kirkendoll is now a year older. Brandon Collins is a year older. Malcolm Williams has had a really good spring, Dan Buckner, and you throw Shipley into that mix. That's a group that we can play a bunch of different players. It has a chance to be the deepest group. Last year, Quan [Cosby], Shipley, Malcolm Williams, James Kirkendoll and Brandon Collins, I thought it was a deeper group than Roy [Williams], B.J. [Johnson] and Sloan [Thomas]. That group you had three guys, one that's still playing in the pros and the other two that played some in the pros. Last year's group was really deep with guys who could go in, play and function. The guys we've got working now, I think we'll have a chance to be as deep as last year's group. I think that Malcolm Williams brings that threat [to go vertical]. We saw spurts of it last year. He's a big guy, got great speed and he's been more consistent this spring catching the ball. Because we play a lot of man-to-man, we've gotten a lot of work on different things against tight coverage. So I've been encouraged by him. Malcolm is a tremendous worker. He really studies the game. He just needs to be consistent in catching the ball.

He's right. We are deep. Like Marianas Trench deep. Kant deep. That doesn't mean that this our best WR corps at Texas, but we've got a lot of guys that can play. Having forty nine scholarship WRs is a good way to guarantee that a few of them will pan out.

Thought: Malcolm Williams' comfort with catching the ball will likely increase commensurate to our willingness to throw it to him. I'm just sayin'. When you own a big gun, wheel it out and fire it at some people. That's why I cut all of the sleeves off of my dress shirts.

On John Chiles' performance this spring: I think John made a great decision in that when we talked right before spring training, he brought it up to me that Colt [McCoy] was coming back and he would only have one year left after Colt. He said, "I really think my best position may be wide receiver." At that point, I was thinking he wanted to go through spring at quarterback. But John said, " Coach, if I'm going to do it, I need to do it now. I need to get out there and learn the nuisances of it." He found that he was in quarterback-shape, but he wasn't in wide receiver-shape. I think he's lost about eight to nine pounds over the course of spring training. He's really, in the last part of spring, come on and been the productive guy. He'll play a position at which we throw a lot of balls real quickly to him and take advantage of his ability to break tackles. John has shown that ability to catch the ball and do something with it after the catch.

Ah, "the nuisances of the position." I have to know if Greg said that or if it was improperly transcribed.

As for John's ability to do something with the ball after the catch - consider me as hailing from Missouri. Not Hannibal though. Cuz of my name.

On the tight ends this spring: Ahmard Howard and Greg Smith have a good battle going on at tight end. It's a shame that D.J. Grant got hurt early in spring because he was doing some really good things. He kind of brought to that position what we've been use to, a guy who can stretch the field and not have to substitute and play four wide receivers as much. I've learned that Ahmard Howard can help us there. I've learned that Greg Smith has got his weight down and he can help us there. They've got a good battle going on. They're not guys that are going to stretch the field by nature, but they do have good hands and can catch the ball underneath. The biggest thing is if they can just give us an extra blocking surface up there, and they've shown signs of doing that.

Jesus, we can't catch a break at TE.

On D.J. Grant's performance before his injury: I was encouraged by D.J. [Grant]. He was a guy who wasn't afraid to put his nose in there, and he was guy who could run and stretch the field and obviously catch the ball, typical as a wide receiver. Speed wise, he's just in the middle of the pack. You move him inside and he's running routs from in there and then all of sudden he's real fast. He's dealing with linebackers and nickel backs as opposed to corners. He's not scared of contact at all.

On the running backs this spring: There's good competition going on at running back. One day, one of them steps up and then the next day the other one steps up. That's an encouraging thing. Having said that, I'd like one of them to just run off and take the job. We'll have to wait until August to see if that happens. Cody [Johnson] was having a really good spring. He's a guy that's got really good vision. Obviously, he's the bigger of the backs. He's done a good job. Antwan Cobb has done a nice job at fullback for us. He really has. He's a smart guy. He's got good flexibility in his hips, so he has great snap at contact. They give us some flexibility if we go to two backs to be able to do some things. [Ryan] Roberson, we've just looked at him a little bit, but we've seen enough to know that he has some of the some things we've talked about with Antwan. He's got nice hip bend and nice flexibility. From being a linebacker, he has good punch at contact.

Our competition is so good at RB that none of them can secure the job. Uh, right. This is like a guy saying that he has so many women after him that he can't get a date.

I think we should pick a starter based on the casting of lots before each offensive series.

On the power running game despite the injuries: We'll continue to do that whether or not it's two-back or one-back, from under center or in the gun. You can't lose sight that the most important thing for offense is to score points, and that's our job. With Colt, you've got to give him some opportunities to score points. Having said that, we still want to run the ball better as a general rule than we did last year. We'll keep working on being able to do that - mainly in situations where we're ahead and we're trying to grind the ball or trying to take some air out of the ball to help our defense.

Will this also help us not to call a zone play with reach blocking in our end zone in Lubbock with an injured RB while the opposing defense is pinching inside?

On splitting up the quarterbacks for the spring game: Colt and Sherrod [Harris] will take the most snaps. Trevor Walker and John Paul Floyd, we'll try to get them some snaps. The spring game, typically, is not a bunch of plays. We'll be smart with him [Colt] in what we ask him to do. He'll play most of the snaps with the first group.

I feel like John Paul Floyd is really coming on. You?

On who has emerged as key players this spring: Obviously, John Chiles having gone out there to receiver and been there from the beginning. He has shown he needs to be in the mix and will be in the mix, especially if he keeps working like he did this spring. David Snow picked up, for a freshman, right where he ended up late in the season. He's a guy that can play center and both guards for us, so that's been encouraging. Then, probably the guy [who's emerged] is Britt Mitchell. With Kyle Hix playing the first seven days of spring and then Britt taking over there, he's really had an opportunity because he's played with the first group, the orange group, to show that he's going to be a heck of a player for us. So he would be a guy that I would point to that maybe the fans were unsure of or just didn't know his name, who has really come on and had a great spring. I like that he's athletic. He's a tight end and same old deal. You move a guy from tight end to tackle, all of sudden he's really athletic. He's got great punch. He's a bright guy. He understands different things. That tackle position is so critical because of as much as we throw the ball.

Good for Britt. I'm glad to hear he's coming along. If he can play well enough to allow Tray Allen a move inside, all the better.

On the importance of the spring game for the offense: It's important my offense stick its fist up Will Muschamp's ass. Boom on that, motherfucker. We want to see execution. We want to see the guys go out and take care of the football. We want to see them compete. Unlike a ball game, we'll be looking more at plays. We want to move the ball obviously, but we also want to get some things on tape. We want to get some ball carriers some carries. It's more of a working day for us than it is a game day. The biggest thing is getting off the field, letting the players get out there and they can't hear us screaming the last minute instructions and let them function the way it would be in a ball game. We want great effort. We want great intensity, but at the same time, we want to evaluate some players.

Did he really say that to Muschamp? It's on.