Roy Miller was the best henchman in the world, the Oddjob of Will Muschamp's operation. Short, tough, and deadly, his best asset was keeping his boss from having to do any dirty work himself. Have a scotch, give an order, and sit back.

Well, Oddjob died and Miller graduated. Goldfinger had to fight his own battle and got sucked out of a plane. Muschamp probably stays up until 3am, weeping quietly to himself. He's going to have to work this year.

The DT position isn't a place where you need a fleet of Sherman tanks. A simple base defense is fine. The fatalist in us wants to worry about what the tackles can't do then drink poison and die, leaving a sassy and self-loathing suicide note. We are a dramatic bunch. But football isn't always about weaknesses, in fact it's much more important to know your strengths. Arizona made it to a Super Bowl on the backs of two guys and a great coaching staff that knew what they could do and didn't bother with anything else.

So what can they do? Lamaar Houston is of the Tommie Harris mold; cat quick and devastating if he can beat the OL to a spot. But not the kind of player that's going to shuck off blockers and make plays, meaning you have to make sure you keep him away from double teams and either in a gap or stunting towards one.

Ben Alexander is passable as someone who can squat in a general area and hold it down as long as there is only one blocker on him. He's shown the ability to get his shoulder down and keep enough of his body free to protect his gap.

Kheeston Randall is mighty and quick, but entirely unknown. He can do anything you'd want a DT to do, but not reliably.

Since Jarvis Humphrey is teetering on the edge of life and death, and Michael Wilcoxin's upside is a reliable paperweight, those first three are probably the realistic rotation this year, assuming none of the freshman show up ready to go. None of them can handle a double team, so we're going to see a lot of situations where the offense doubles the playside and only tries to hold off the other DT long enough for the RB to run away. You can see that play out here:

We're going to see this early and often. Alexander did what he does, but of what use? The play isn't going to him and he most certainly won't make it to the play. Houston was hit with two bodies and turned around completely, unable to even keep the second blocker from getting to the next level. This was the first play of the game. Early and often.

It just so happened that the second play of the game illustrates what we'll likely see from Muschamp as a first line of defense -- quick stunts from the linebackers to keep double teams off the tackles. Yes, it's the same concept as mugging, but Muschamp, from some reason, didn't line up some LB with no rushing skills right in the face of a blocker. We hid it:

Run stunts are not unlike the 46 defense, which is not unlike our three man line from last year. Instead of lining three men up across the middle of the OL, one of them is a LB sprinting into position late. What he lacks in size he makes up for in force and surprise.

Notice how Norton's blitz prevented Michael Huey from engaging Alexander. Notice then how Alexander is able to fight across the face of Chris Hall and get to the playside, because he can handle one blocker. (You may also choose to notice Alex Okafor's outstanding play, but this isn't about him).

Football is much easier when you can reduce it to one on one match ups that you can win. Putting either one of our starters against two blockers because 'gal durnit, that's how we do things' will lead to a lot of hair pulling and blog whining. Nobody wants that. There were a lot of run stunts in the spring game, so it looks like Muschamp knows what he's up against this year.

The last clip also featured a nice appearance by Good Lamaar Houston, slicing past his man and closing down on the runner from the backside. This is what he can do better than anything else, but no offense in its right mind would give him a chance. You run at speed and away from strength.

We can combat this by reinforcing the immediate area around Houston with additional personnel, shifting the bulk of the line one way or another. This is called either an over or under front, depending on which way you move your guys: 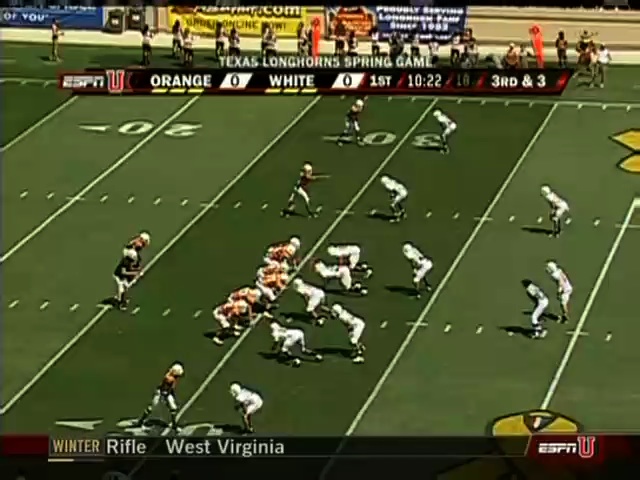 That's an over front. The line has shifted it's strength to the strong side of the formation. From another play and a better angle: 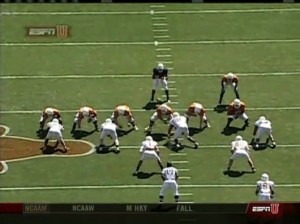 There are 4 blockers from the center to the TE, and 4 defenders over them. There is no opportunity for a strong double team here. It they do, the LB will be free and the DE will be left with a tight end, which is generally a win for the defense.

This is was our base defense last year so it's not exclusively for Houston's benefit. He's pretty awful at the point of attack if he's faced up to someone, so we'll see a lot of defense simply align the strong side of their formation to Houston's side. The tight end blocking the DE is sub-optimal, but the alternative is having two blockers for two linemen, leaving Houston alone to do Good Lamaar Houston things.

Muschamp didn't do it in the spring game, nor did he do it last year, but should offenses insist on pressing the issue, we may see the line, or at least the tackles, line up according to strength instead of left/right. Having Houston away from double team possibilities would play to his strengths and make him a better football player. This would put us in an under front. The downside is that Ben Alexander would be the one getting doubled, but we could run blitz occasionally to help him out.

How do you rush the passer, then, if neither of your guys can get off of blocks? The blitzing helps, but we can't always rush 5 or 6. This is where Muschamp will earn his paycheck this season. We did a couple different things in the spring game.

Stunts like that will let us create matchups and angles for the linemen that will get them in a little more favorable position. This one works about as well as you can hope for, which may say more about our OL than DL, but that's just the fun of the spring game. We can also combine that with blitzes to create penetration:

To help out with double teams from the center, we used a split front, meaning both DTs played 3 techniques: 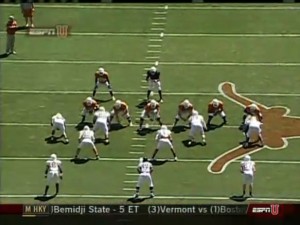 This removes the immediate threat of a double team from the center. We went to this front in almost every 3rd and long and 2 minute situation. We could substitute a bigger DE for Ben Alexander -- Russell Carter, or a healthy Eddie Jones being my choice -- since there isn't a big need to fight through two blockers with this front.

We did a lot of this stuff last year, so it may just be that we have a very DT-friendly defense regardless. The one difference I expect to see is more blitzes from a single LB, giving us a 5 on 5 situation on the line. We can cover man to man, so the trade off between blitzing and risk on the back end will be some what mitigated.

While I'm here and watching the spring game in more detail:

- Alex Okafor won't be a dominant pass rusher this year because he has no moves at all. If he gets around the guy, great, but if the OT is on top of him they'll just lock up. He's going to be a superstar eventually, but we need to teach the kid some tricks. It took Brian Orakpo 3 years to learn his little dip, if that means anything.

- Christian Scott is for real. He's faster to the line than Gideon, and had more hard hits in the spring game than any other safety did all of last year. I am fully on board with him now.

- I was wrong about Wells, he got some meaningful time on Sunday.