Your Childhood is in Peril

Share All sharing options for: Your Childhood is in Peril

Terrible peril. Want a little peril you say? No. It's too perilous.

My second longest running internal debate is rather personal, but since Barking Carnival is such a community of nurturing individuals- communurturers, if you will- I feel okay discussing it here with all of you. I have long suffered from the intense personal dilemma of trying to decide who should be cast in the Thundercats movie. I know. It was only a matter of time before they made one, it's simply too wonderful a story to remain untold for so long- the wisdom of Jaga, the childlike innocence of WilyKit, the bitchin' hair of Lion-O... it was always a matter of when, not if. Plot and concept wise it's a can't miss- sentient cats fighting a space zombie- and I knew casting was always going to be the biggest hurdle; accurately portraying such a rich and varied ensemble of characters would require real talent and chemistry, and actors who could make the tough decisions for their character in the moment.

Do I take it over the top while I'm trying to whop Monkian with my bolo-lasso-whip thingy, or do I pull it in, and show some vulnerability, some sense that I understand how hard it is to be a talking monkey freak, who is only doing bad things because Slithe made him? 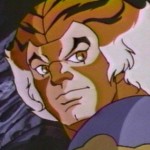 Notice the depth and range...

Their are going to be a lot of tough roles to play, and deep down I've always been worried they'd get it wrong.

It's as if my worst fears have been realized. I feel like I just found out I'm going to see G.I. Joe: produced, written, directed and starring Penny Marshall as Lady J. {shudder}. Not only is casting out the window, now I have to worry about plot and basic sentence structure as well. Oy Dios Mio. Let's say they get it right, and cast Daniel Day-Lewis as Lion-O and Christopher Walken as Mumm-ra, which totally makes sense, he's probably going to waste all their good lines wondering if Tygra is gay. Most likely during a floating/speeder thing chase scene.

Or worse, what if he completely leaves someone out, like he did with Soundwave and Ravage from Transformers? Bastard. I don't think I can take another mortal blow like that. Here's a close appoximation of what the trailer could very well look like.

Remember when Saturday morning was new and pure? Hours curled up with a Spiderman blanket eating cereal that somehow turns milk blue, wondering exactly what that thing Ookla was riding was? Some kind of lizard-horse or something. What the hell. Or why Cobra Commander and Starscream were the same guy? I mean, you never saw Cobra Commander's face, so he could very well have been a robot, but it seemed a strange tie-in to me since he never flew or anything always acted scared of Destro. If I was actually Starscream pretending to be Cobra Commander my to-do list would have been 1. Kick Destro's ass. 2. Nail the Baroness. It just didn't make sense. But that's not really the point.

The point is that my childhood is under attack by Michael Bay. Even though it's too late now I am going to do the right thing, and record my final cast list for Thundercats once and for all. It's a futile gesture, but so is finding receipts for the tax exemptions I'm claiming, which is exactly what I'm putting off by doing this. Call it a draw.

Man. Now I feel better. Feel free to critique or, more importantly, get started on the other critical memories from our childhood before Michael Bay destroys them. I suggest M.A.S.K., SilverHawks, Jayce and the Wheeled Warriors, or Voltron. Girls and scally can work on Gummi Bears and Duck Tales. Extra points for bold moves, such as keeping the black dude from SilverHawks named Hotwing. He was awesome. Good luck.