Pac 10: "Getting our own network is inevitable."

Share All sharing options for: Pac 10: "Getting our own network is inevitable."

Out of the six BCS conferences, only the Big East has a worse overall regional TV package than the Pac 10 (The Big 12 is barely better). Thanks to the current economic climate the Pac 10 is looking to add to its revenue stream by starting its own regional network.

According to 2007 Internal Revenue Data, the Pac 10 was trailing the other major conferences in gross receipts (game day revenue) -- by a wide margin.

How bad is their regional TV pact? The Pac 10 receives approximately $43 million annually from its television deals with Fox, and ABC/ESPN. The Big 10 picked up $66 million from its own network in 2008.

What about the Big 12? Don't expect a conference regional channel anytime soon.

UT didn't put TV and radio production facilities in the north of of the stadium just to help out a Big 12 Regional Network. At some point the Longhorn Channel could become a reality.

As might be expected the SEC was proactive and cemented their regional TV future for the next 15 years. 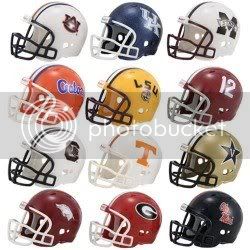 All the SEC had to do was casually mention that it was thinking about starting its own channel, and their network partners jumped in with buckets of money.

The SEC recently signed a pact with ESPN that will bring in $2.25 billion to the conference over the next 15 years. Combined with a renewal of their CBS contract, that means that the SEC will bring in $205 million a year in TV revenue.

It's not just the increased revenue stream that is important for the SEC. They are now the crown jewel in the WWL brand for college athletics. Get used to being inundated with promos for "The SEC on ESPN,"