Share All sharing options for: The Big 12 Zebra Preserve

Last week, Tom Osborne received deafening silence for his idea that the Big 12 sit struggling officials. Insiders speculate that this is punishment by other athletic directors for Osborne insisting that he be called a Doctor, despite his doctorate being in something as completely bullshit as educational psychology. 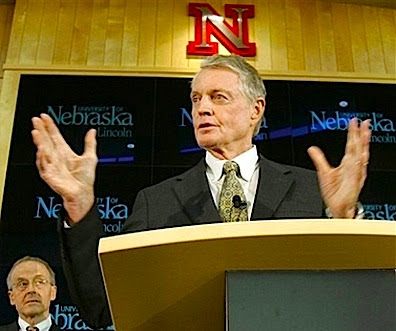 This led Dr. Tom to launch a profanity-laced tirade aimed at other Big 12 athletic directors and "various Armenian advocacy groups" in which Dr. Tom claimed that "certain motherfuckers in this room are trying to test me" and culminated with him pelting A&M Athletic Director Bill Byrne mercilessly with detritus from a break table: a chocolate dipped pretzel, a half consumed bottle of Evian, and a Mounds bar.

Forgetting that Osborne is a maniacal hothead, I actually applaud his push for greater accountability. However, I don't think that the Big 12's spotty officiating is the consequence of rogue referees, but rather is a systematic failure countenanced by its head of officials, Walt Anderson. The Big 12 head of officials made a decision to feature scoring offenses and it's setting back the quality of play.

Holding is now a legitimate basis for constructing an offense: stock your OL with 350 pounders that can't be bullrushed and let them grab any greyhound who tries to sprint past. With QB exposure now a minimized risk, you can gleefully send out five receivers. You also get a false sense of your passing game's efficacy and neglect your running game. Is it coincidence that Tech was stymied by Ole Miss blitzing, Texas was defensed effectively by Ohio St, and OU was shut down by Florida? Amazing how those high-flying offenses crashed to earth against good athletes allowed to play the game by competent officials.

Pass defense is now a crapshoot. Perfect coverage is assumed to be interference if the receiver can look properly aggrieved, any notion that the defender has an equal right to the ball has been scrubbed, and defensive coordinators rejoice if they hold the opposing offense to a field goal.

We can argue back and forth whether this style of play is desirable, but I'm fairly confident that you'll continue to see 45 point per game Big 12 offensive machines scoring half of that in big games with neutral officials when receivers encounter normal DB contact and OL find themselves warned after the first snap to stop grabbing or they'll get a flag.

Right now the guy who needs to be sat down for a while is running the whole officiating show. And that's not going to happen.