Bill Has a Dream

Share All sharing options for: Bill Has a Dream

Fake Ken Tremendous or whatever you want to call him is back with another Bill Little exegesis. Ouch. - The Mgmt.

Throughout the long, dark off-season, Bill Little has written about nothing other than dead, dying or terminally ill former Longhorns. I was starting to get depressed. It's my job to riddle Bill Little columns with rhetorical bullets, and he was ducking behind the sports journalist's equivalent of human shields. Until yesterday, that is, when our old friend finally made a critical mistake and bolted headlong out into the middle of Cornball Street. Enjoy.

Bill Little commentary: NCAA Regional chronicles -- Last man standing
It is hard, if not darn near impossible, to be all alone in a crowd. And yet there Preston Clark stood, watching with the rest of the baseball world in Austin, as his line drive to left field battled to defy nature.
June 1, 2009
Bill Little, Texas Media Relations

It is hard, if not darn near impossible, to be all alone in a crowd.

And yet there Preston Clark stood, watching with the rest of the baseball world in Austin, as his line drive to left field battled to defy nature, to somehow best a 25 mile per hour wind that seemed determined to blow it foul.

Close to 14,000 eyes were watching the ball, including those of the three Texas runners on base who had somehow produced a 10-10 tie out of a four run deficit heading into the ninth inning of the NCAA's Austin Regional Championship game against Army.

Frozen just a few feet from home plate, locked in his dreams, was Preston Clark.

This is a straight-forward application of Little’s First Law of Dreams, which states: "you can get locked in them."

The road for the senior from Rockwall had been as tough as it has been for any Longhorn ever.

The guy once heralded as a "can't miss" super star even moved quietly into the 2009 Austin Regional, inserted in the lineup in the Longhorns' opening game against Army as the designated hitter-a right-handed batter in the fifth spot of the lineup against a left-handed pitcher. But-and you have heard this before-playoffs do make strange heroes.

Bill’s right - I have heard that before! The phrase "playoffs make strange heroes" appeared in this piece, writen approximately a week ago by none other than Bill Little! So, I read this allegedly common saying last week, in Bill's article.

Even more amazing - I've read the entire phrase "you have heard this before-playoffs do make strange heroes" before! Bill wrote that in a 2005 article about the Texas baseball team - an article in which William Pappadapolis Little pulled the impressive feat of both coining the phrase "playoffs make strange heroes" and, in the same breath, claiming that his readers had heard the newly-invented cliche before.

You see, aside from Bill Little-penned college baseball articles, the phrase "playoffs make strange heroes" has never been uttered, written, thought or considered by any human being ever. Just Google it and see for yourself.

But, and you've heard this before, wistful old sportswriters do make strange lemonade!

From the beginning of the tournament, Army coach Joe Sottolano had warned that his team, which batted .334 over a 53 game regular season-could hit. He also made it very clear.

I don't think anyone - not even noted warner and extreme clarifier Joe Sottolano - could make clear what in the hell a "53 game regular season-could hit" is.

Army had not come to the NCAA Regional as a fourth seed with expectations of a nice visit to Austin and a box of "you were here" medals.

That's good, because I don't know why anyone would expect to receive a box of "you were here" medals. You know, since such medals do not actually exist in reality and someone would therefore have to be dangerously psychotic to expect to be given an entire box of them.

"It is not our nature," he had said, and his steel eyes and those of his players made you know he meant what he said.

The image of the entire Army baseball team and coaching staff glaring at Bill Little in befuddled anger after he asked whether they came to Austin for a box of "you were here" medals makes me giggle.

Augie Garrido has often said that baseball is a game of the unexpected, and this 2009 Austin Regional proved to be that for many of the so-called analysts who at one point called it the easiest of the 16 regionals. It was, without question, the best balanced, and the most competitive, of all of the many regionals held in Austin since the first was held at what was then Disch-Falk Field in the summer of 1979.

Sweet Jesus! Can somebody in Bellmont please edit the run-on sentences? Or, at the very least, hire a a team of primates to randomly delete words from these pieces?

Any of the four teams could have won it.

The Austin Regional was so close that any team - even the team that didn't win a single one of their two games - could have won the tournament.

Mack Brown has a saying when qualifying something that is really good, and it's…

…"I won't say it is the best, but I will say no one has anything better."

So it was with Wood's truly remarkable performance. He threw 169 pitches and basically pitched more than 12 innings of no-hit baseball. Old timers at Texas will tell you how Bobby Layne pitched a no-hitter at Texas A&M to claim the Southwest Conference title while nursing a cut foot and a dozen cold beers. The "gold standard" for Texas pitching masterpieces prior to Saturday night was thrown by Burt Hooton during his junior season in an SWC showdown against Texas Tech. Hooton, who was credited with a no-hitter by pitching a perfect game over the regularly schedule contest, defeated the Raiders' Reuben Garcia, 1-0, in a 13-inning game many claim was the best pitched game ever in the SWC. Hooton didn't walk a batter, wound up allowing one hit (the batter was retired on a double play), struck out 19, and faced the minimum 39 batters.

What an unconnected mish-mash of a paragraph. Here’s a summary: "Austin Wood had a good pitching performance. Old people will tell you a story about Bobby Layne pitching and drinking. The best pitching performance ever by a Texas pitcher was by Burt Hooton. Also, Reuben Garcia pitched pretty well for Texas Tech once. Here are Hooton’s stats: blah, blah, blah. Okay, I should move on to something else now since I’ve fully and completely argued whatever banal point I intended to make."

Now, here on a surprisingly still late May Saturday night,

I have to admit that Bill is correct. Austin is typically windy on late May nights, especially on Saturdays.

Preston Clark stood at home plate, awash in the dream of every player who ever picked up a bat or threw a ball.

Preston Clark experienced Little’s Second Law of Dreams, which is: "you can be awash in them."

It is that moment of the spirit, when time stops, and the world is in freeze frame.

It is also that moment of the senility, when Bill Little forgets to complete his thought.

Folks down the left side of the ball park looked at the third base umpire, who thrust his arm toward the field. Preston Clark raised his hands, and started to first base.
"When," they asked Joe Sottolano, "did you believe your team was in trouble?"

Who is this mysterious "they" asking questions of Coach Suttolano in unison? Bill's account of the press conference makes it seem like questions were posed by a crowd of biblical Jews.

"When the grand slam happened," he said. "Until then, we have enough confidence in ourselves and in our team to believe we had a chance. It is not in our nature to do anything else."

What happened at UFCU Disch-Falk Field Saturday night and early Sunday morning was historical. The record will show it was the longest game in school history, and in NCAA history. Individual records were set, and they will all be dutifully recorded in the annals of time.

I'd like to meet the diligent little fellows who spend their days dutifully recording individual records in the official Annals of Time. I bet they look just like hobbits.

But what happened on Sunday night and throughout the tournament was memorable. It is the essence of sport that you remember the moment.

It is then that iPhones and digital cameras give way to the pictures that hang on the hallways of the chambers of the mind.

I’ve said it before, and I will say it again: Bill Little is attempting to jam electronics, picture frames and other paraphernalia into his brain, where he apparently believes there are chambers for storing such things.

Because the wonders of technology are proven and true, but they can never capture one thing: A feeling.

Electronics may be incapable of capturing a feeling, but can the borrow one? 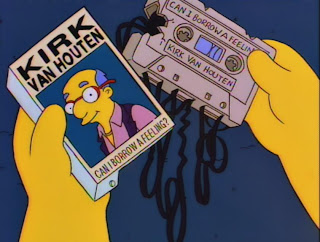 That is the pride Joe Sottolano felt.

What is the pride Joe Sottolano felt?

as he looked the young men he had recruited to come play baseball and become American soldiers at The United States Military Academy, a similar kind of pride that Augie Garrido has felt in watching young men grow,

Please stop, Bill. Please. I'm begging you to stop writing uncomfortable things about young men growing. This is like the 90 bazillionth time you've made a comment about an adult male enjoying watching young men grow, and it's really starting to creep us all the fuck out. So, like, please knock it off, okay?

Most of all, it is about Preston Clark, and all those like him who have battled adversity.

What is about Preston Clark? Here's a helpful 5th grade-level writing tip; when you write that "it is about" something, it helps to first specify what in the hell "it" is.

...waking up knowing who you are, and going out and realizing who you can be. And that is the best dream of all.

No, not even close. The best dream of all is the one where I'm swimming in my own personal Olympic-sized pool full of gold dubloons like Scrooge McDuck, surrounded by a harem of scantily-clad and particularly frisky Beyonce look-alikes. THAT's a good dream. Second to that dream is the one where I've been adopted by a tribe of hobbit-like creatures who dutifully record individual records in the Annals of Time. That is also a good dream.

Waking up and realizing who you can be, on the other hand, is not a good dream. Hell, given that its basic premise is the step of waking up, it's not even a dream at all. It's called "approximately 7:00 AM every fucking weekday morning." And it's frankly a bit depressing.