The Heck do ya Mean?!

Share All sharing options for: The Heck do ya Mean?!

Reports have surfaced indicating that Texas is in negotiations with the University of Minnesota for a home and home and Barking Carnival's exclusive sources* indicate that talks may be coming to a head. For obvious reasons this appeals to me personally but it's also a continuation of a trend in our scheduling that I think is worth exploring.

*My aunt Sandra who works in U of M admissions, has nothing to do with and little knowledge of sports tells us, "Oh wow. That would sure be neat,".

First let's take a closer look at the Gophers. After almost thirty years in the soulless Metrodome the Gophers are moving back outside this season into their new TCF Bank Stadium, built to conjure up memories of Minnesota's old Memorial Stadium, nicknamed "The Brick House".

Minnesota is coached by Tim Brewster, famous to Texas fans as the man most responsible for Vince Young's signing. Brewster is also notable for his adherence to the new trend in young coaches of outrageous hubris without the slightest bit of accomplishment. Normally megalomania is preceded by at least a modicum of success but who am I to argue with progress? We here at Barking Carnival completely support guys that watch themselves in the mirror during sex. You know, whatever.

Now the new stadium looks great and the Twin Cities are absolutely gorgeous in September but the U of M hardly meets the widely circulated intentions of Deloss Dodds' to schedule teams roughly in UT's same academic and athletic stratosphere. In fact, the last few scheduling decisions seem more aimed at the enjoyment of Texas fans in their travel destinations than anything else. Let's take a look at some recent and future out of conference opponents, particularly those with whom we scheduled return trips.

Central Florida was the sole OOC road game and if you can come up with a reason our athletic department allowed such a thing without including the words Magic Kingdom, Epcot Center or Goofy you've got me beat.

We traveled to El Paso to play the UTEP Minors. I personally enjoyed the trip and I know many other fans did as well but I'd have to chalk this one up more to a hole in our scheduling than anything else, or perhaps an attempt to return Mike Price to his previous job writing online pornography reviews.

A beautiful destination at a perfect time of year. An absolute treat for anyone who loves the outdoors and... an opponent whose quality will get us roundly mocked.

We start our series with UCLA (with the return trip coming in 2011) and this match-up comes closer than anything else to the academic/athletic equivalency criteria. Oh, it also happens to be in Pasadena where Longhorn fans are accustomed to dropping oodles of cash and already have relationships with the staff of their favorite hotels.

Ah Ole Miss. Tailgating at The Grove. The Walk of Champions. Hotty Toddy. Who gives a shit. 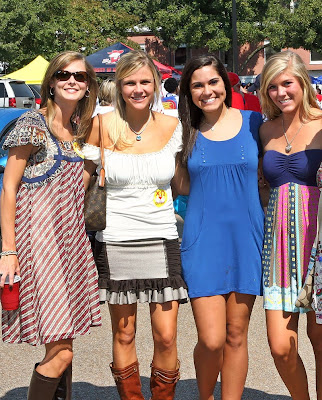 I think we all understand what this trip's really about. This is the mingling of the two fan bases with the hottest coeds in college sports. The attractiveness quotient will be unholy and the state's going to stink like sex until the next time Tennessee visits and makes everyone forget all about such an enterprise. Basically the opposite of a Michigan Wisconsin game. So once again we have a great trip and perhaps a decent on-field opponent. Perhaps.

Minnesota seems like another in this line of opponents where the primary consideration is a pleasant destination for our fans with level of competition being a secondary concern and comparable academics being almost completely disregarded. Now I really could care less about playing teams in our academic realm but this was one of the scheduling criteria only recently offered up by the Athletic Department and it doesn't take long to start salivating over the teams it would include. Here are a few schools that share the top tier of US News' rankings with UT: Notre Dame, Michigan, Southern Cal, Penn State, Florida. See anybody in there you'd like to play?

Now I fully understand that the system as it's now set up discourages the scheduling of teams of this calibre (us included) and I also get that one of the jobs and joys of the athletic department is to piss down my back and tell me it's raining. Still, I can't say it doesn't frustrate me to have them pay lip service to the idea of 'similar athletic and academic status' and then just buy us off with nice vacations.