Question: when was the last time that Longhorn LB talent was this good from top to bottom? You may be surprised at the answer. Let's look at the current crop...

Sergio Kindle was 1st team All-Big 12 last year despite not having a clue what he was doing. Now he does. And we hired him a chauffeur. He'll be an All-American this year. 6-4 255, runs like a sable, and has a motor that doesn't quit.

Roddrick Muckelroy will lead the team in tackles again after a 2nd team All-Big 12 campaign in his first full season as a starter. Muckelroy is a crucial defensive glue guy and he'll repeat his All-Conference honors again. 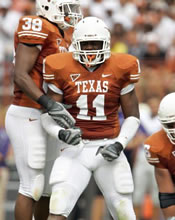 Jared Norton has been around the program for a while now starting 8 games for us and playing in 37 while accumulating 122 tackles and 4.5 sacks over that time. Physical kid, limited in space. He's not spectacular, but I'm glad he's around. I expect a senior year jump in his play.

Keenan Robinson has already been tabbed as The Next Big Thing - aggressive, sudden, athletic. The only thing missing are reps. He'll get them. Muschamp thinks enough of Robinson and Acho that he will move Kindle to Buck DE full-time in order to get one of them on the field.

Waiting in the wings are two guys who should be first off of the bus: Emmanuel Acho & Tariq Allen.

Acho is getting good reviews at OLB and developing a body that is Orakpoesque. If Robinson doesn't fulfill his potential, don't be surprised to see Acho seize his PT.

Tariq Allen is a physical MLB who, if he can stay under 250, will be a run-stopping force in the middle when his time comes. His high school film was a tackling clinic and he plays with real intellect.

The question remains then: when have we been better at LB?

2004? Derrick Johnson was paired with Aaron Harris (before Harris began actively treating his glaucoma). Looking good so far. The third linebacker? Eric Hall. Oh, snap. Primary depth was provided by a young Scott Derry and Robert Killebrew. We just drove off the quality cliff faster than an American car manufacturer.

Working backward, and with apologies to DD Lewis and the Carl Reese MUG, things range from ugly to average at LB in Austin for, oh, the next 15 years or so.

Until 1990. We may have an argument here. The Shock The Nation Tour featured the athletic Brian Jones at MLB - he led the team in tackles and was an excellent inside blitzer, quality Boone Powell at SLB, and the vastly underrated and undersized Anthony Curl at WLB. Depth was damn good, featuring a young Winfred Tubbs and Mical Padgett. The following year, Curl, Padgett & Powell would lead the team in tackles 1, 2, 3 on an excellent defense sabotaged by arguably the most horrendous offense in Texas history.

Still, can any of those starters even touch Kindle as a pure talent? No. And I'd argue that Muckelroy is any of their equals.

The late 80s aren't particularly kind, though I'd be remiss if I didn't mention Britt Hager or Ty Allert.

It isn't until the early 80s that you get the kinds of LBs stacked up that should define Texas defense: Jeff Leiding, June James, Bruce Scholtz, Robin Sendlein.

So, depending on your viewpoint, it has been at least 20-25 years since Texas has had this kind of talent at LB. Quite possibly longer than that.