Why Not Deal With Street Agents? Why Does the SEC?

Share All sharing options for: Why Not Deal With Street Agents? Why Does the SEC?

If street agents are becoming an increasingly dominant fixture in college football (and they are) why doesn't Texas participate in the game? After we started writing about it, this question was posed to me by more than a few of my friends who pointed out what we all know: our alums are outrageously wealthy, obsessed with football, love to meddle, and easily capable of placing every street agent in Texas on permanent retainer. We could own the current principals and even create some of our own. One, two...one thousand Will Lyles. Allegedly.

So, pesky moral objections aside, what do we have to lose?

That, to me, is a question posed by people who grew up not knowing a lot of hustlers, opportunists, criminals, grifters, and ruffians. Or they don't follow politics. If public schools and busing gave me one gift, it was the ability to broaden my horizons to include a large number of questionables in my circle of acquaintance, so I'll tell you.

I heard an anecdote from Jay Leno (of all people) once that did a pretty nice job of explaining why you don't get involved with street agents and hustlers. Or, more broadly, why you never want to get involved in a power relationship with someone with nothing to lose when you have moral, financial, and reputational stakes in the game.

Back in the 1970s, Vegas and Atlantic City were still mobbed up and the casinos were often semi-legitimate fronts for illegitimate enterprise. Leno was a struggling comic who could barely pay his rent, looking for his big break.

One evening, he performed a late night set at a smoky club for his customary chump change and, after his set, was informed by a large sweaty guy that he should come back to a private booth and meet someone. It was suggested in such a way that the answer needed to be yes. Leno quickly realized he was being called back to meet a local wise guy. The wise guy told Leno he was a funny guy (no accounting for Mob taste), expressed his interest in helping him in his career, and slipped him $100 for walking around money. After some chit-chat, he said, in the familiar refrain of mobsters and extortionists the world over,"Anyone ever gives you trouble or you need something, anything, you come to me. You got it? Anything. You come to me. I'm going to look out for you. OK?"

Now, Leno is barely getting by and there's no doubt that the young comic is feeling a little giddy, maybe a little important - he's been called over to this big guy's table and told that he's going to be sponsored by him, he could help Leno in a thousand little ways at that stage in his career - but he makes the right call. He slides the $100 back across the table and says that it was a honor to meet the gentleman, but he was doing fine. He wouldn't need any favors, but really appreciated an important guy thinking of him. Then he left.

Two days later, the incident forgotten, Leno felt a tap on his shoulder and saw the made guy - a little inebriated, maybe feeling a tad too truthful - and he said:

Then he patted his cheek affectionately and stalked off.

Pay a street agent $4,000 for a recruit visit or $30,000 for a commitment - even through a Byzantine chain of 3rd parties rife with plausible deniability - and you've just started a relationship that you can't break. One controlled by the party with the least to lose. And when you're running an enterprise worth hundreds of millions with a reputation at stake, an article in Sports Illustrated prompted by a street agent that you wouldn't pay follow up quiet money to is a virtual certainty. See Reggie Bush and his dealings with a disgruntled "real" agent. Not to mention that you validate and increase a street agents standing in the recruiting world by playing their game.

So why do Auburn, LSU, Alabama, Tennessee play the game?

First and foremost, they have no reputation to uphold. The SEC has informally agreed that cheating will be tolerated, most particularly in a non-SEC border state like Texas. They have too much to lose with internecine warfare. They saw what it did to the conference ten years ago and everyone saw what it did to the SWC in the '80s.

Second, who will tell the tale? ESPN - a sports media company (not a journalistic enterprise - even though it pretends to its trappings) - is incentivized to keep a lid on SEC malfeasance with its new massive SEC TV contract. And the local state papers are all in the bag for the hometown team. It would require an out-of-state paper, probably outside the SEC, to ask some of these tough questions. And a readership that gave a damn. The New York Times relies on homer stringers for that sort of stuff (hello Thayer Evans) and they view recruiting as an anthropological exercise in the seamy underbelly of Red State America. Their prevailing notion, like any SEC fan you talk to, is that everyone is equally dirty.

Third, when you're admittedly dirty at a school where the academics provide a backdrop for the business of football, the leverage of the extortionist is greatly reduced. In short: if you have a clean reputation and choose to cheat, you have a hell of a lot to lose. When you have a dirty reputation and cheat, you're simply fulfilling public and constituent expectation. An extortionist's leverage is always directly proportionate to the victim's fear of public revelation or physical/financial harm.

Fourth, as my SEC graduate girlfriend pointed out to me, do you really want to be the street agent that tries to extort LSU? In a state where the local papers, law enforcement, and judiciary are in the bag? And where there are no shortage of good 'ol boys eager to find you alone in a parking lot?

What to do then? Joe Paterno counsels simply ignoring the cheating and letting it implode in its own good time. Stay clean and quiet and keep the moral high ground. That's what he did with Jackie Sherill when he was at Pitt (aside from his famous quote of why he won't retire - "Because I won't leave college football to Barry Switzer and Jackie Sherrill.") That appears to be Mack Brown's stance as well.

Personally, I'd like to be a little more proactive.

If I'm Will Muschamp, I can make life very uncomfortable for street agents and the schools that do business with them in the state of Texas. A few well-placed jibes against schools that do business with them would be sufficient to motivate even the laziest newsroom to start checking travel, inquiring about "consulting arrangements", and puzzle through why multiple recruits are being delivered hundreds or thousands of miles to certain camps by guys who live 250 miles from these recruits and bear no family relation. There are a million ways to get the word out.

If cockroaches flee sunlight, open a up a curtain. If you don't, spare me the whining when they multiply. And they will. 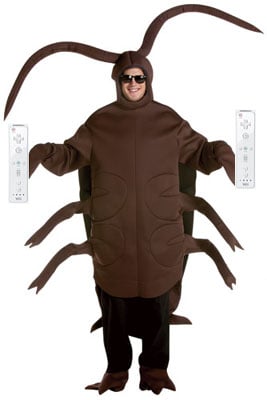