Share All sharing options for: Pace's Effect on Scoring

An e-mail discussion and a message board discussion elsewhere worked together to prompt me to take another look at pace's effect on points production in college football. Pace is a statistical concept that I first came across at Ken Pomeroy's excellent college basketball site. It had never occurred to me to extend the concept to college football until last year. 2008 saw a ridiculous amount of points scored in the Big 12 and there are plenty of people who believe that the speed at which the Big 12 played its games was a huge contributing factor. We will ignore other potential factors for the purpose of this post. 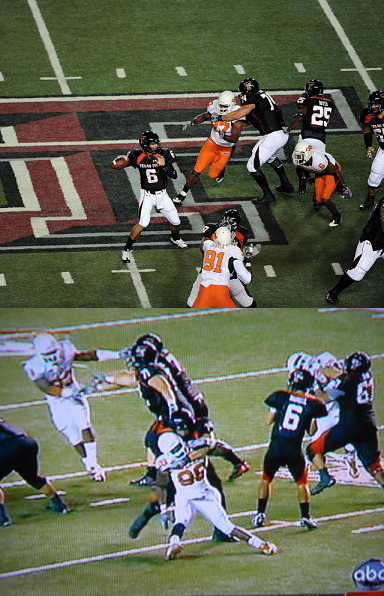 Texas Tech played with a lot of pace last year

For this analysis I went through the drive charts of all 49 Big 12 conference games from 2009. End-of-half drives were pulled out, including those where teams were kneeling the ball to kill the clock. Each game was charted for possessions, yards, and points for each team. Field goals were counted as offensive points and all touchdowns were assigned seven points regardless of PAT outcome. I also charted the starting field position for each possession but haven't yet figured out how to perform the final analysis using that information. An interesting note from that data, though, is that in 2008 Big 12 teams averaged 2.97 points when starting inside their own 10-yard line (64 total drives). The interesting part? They averaged 1.95 on drives starting between the 10 and 19 (147), 2.43 on drives starting between the 20 and 29 (397), and 2.68 points on drives starting between the 30 and 39 (227). Any ideas on why that would be? All I can come up with is overaggressive defensive playcalls.

As we move forward, one important thing to keep an eye on is that according to the standard per game stats, which are of course all that most "analysts" are able to wrap their heads around, Oklahoma's offense was just over 37% more effective in Big 12 games than our offense was. It's hard to argue that they were better according to raw numbers, but 37%? Sounds crazy. And it is as we'll see in just a second. After charting every game I went ahead and ran my standard iterative analysis on the numbers, which accounts for schedule, etc. Here are the results (OPP = Offensive Points per Possession, the rest you can figure out from there):

The first stat column, Pace, represents the average number of possessions each team had in the games played by that school. Not including, of course, end-of-half or kill the clock possessions. What do you notice? Obviously Oklahoma plays the fastest pace in the conference, although KSU isn't far behind. However, Oklahoma played by far the fastest pace of any of the big four teams from the South last year. And good teams should play fast because the higher the number of possessions, the lower the probability that random chance can create an upset. Therefore the fact that Texas played so slowly is just a poor strategic decision. The other smartest team, pace-wise, was Baylor as the Bears played 6 of their 8 games against teams that were stronger than they were on a per-possession basis and had the slowest pace in the league.

Here we can see that Oklahoma's offense is now rated a more reasonable shade under 11% better than Texas' offense. And whereas Texas' defensive advantage was nearly 27% it is now just over 8% in the new analysis.

Any thoughts? My intent, if I have time, is to next analyze the SEC and compare the two conferences' pace numbers and per-possession stats. The SEC is historically the strongest football conference and last year served as a counterpoint to the Big 12's offensive free-for-all. The Big 12 saw a little over 2.82 points per possession and 64.4 points per game last year and I have a feeling that the per-possession set will show a much smaller difference between the points environments in the two leagues than the raw totals have led most to believe. And, of course, I will still ignore the fact that the SEC called holding 30% more often than the Big 12 last year. Or somewhere around there, I don't think I ever finished that study. But we'll go with that.