Hawaii coach Greg McMackin got himself into trouble the other day for describing a chant that Notre Dame players did before last year's Hawaii Bowl as 'this little faggot dance.' What in the Wide Wide World of Sports is a going on here? How could anyone think that anything Notre Dame football players do is gay? 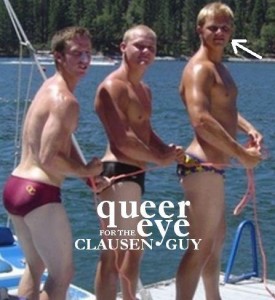 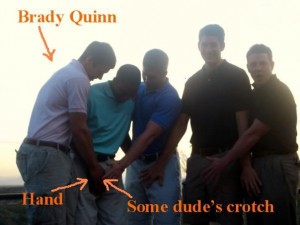 Ok, so they probably were jumping around like a bunch of Kansas City faggots. But does the coach of the team formerly known as the Rainbow Warriors have any room to talk? Probably not.

Teh gays reaction was swift, thin and got along really well with women, and McMackin publicly apologized a few days later.

Wiping away tears from his swollen-red eyes, McMackin said he's offended the gay and lesbian community and now he wants to work with them to use the incident as a "teachable moment for me and hopefully others."

"You know how I know you're gay? You cried at a press conference."

The university suspended him without pay for 30 days, and McMackin has volunteered to take an additional seven percent pay cut and also to subscribe to Men's Fitness.

I'm unsure of the significance of the sevent percent figure. Perhaps it's gay code like wearing an earring on your right (left?) ear or working out at the downtown Gold's Gym in Austin.