So I get this e-mail from a good friend tonight:

Are you aligned with futbol or are you a casual observer?

A massive match is set to take place in the most imposing place in North America – Estadio Azteca – complete with 110,000 rabid fans, who gladly hurl batteries and zip-loc’d bags of urine and feces at the opponent.

If you have a pulse, if you consider yourself an American and Patriot, you WILL tune in to Telemundo tomorrow at 1:00 PM PDT to witness the beautiful game, played in a vile excuse for a sporting venue, and cheer on our Boys as they battle El Tri. Watch Lando, Jozy, and Howard conquer the arrogant Mexicans on their storied and sacred pitch – their Valhalla of sorts, where the remnants of ritual human sacrifice litter the geologic strata in the Earth below (and where the smog and particulate matter are so thick, you will leave with COPD.) Root on your fellow Texan, Clint Dempsey, the pride of Nagodoches, as he looks to head home the match winner! Come on, join Sam’s Army and root on Your team – I am sure you will then experience true fandom.

I grew up in Texas where the basic idea about soccer was that it was something you did as a kid until you were old enough to play real sports: football, basketball, baseball. I mostly remember wanting to tackle people and enjoying orange slices at halftime. However, I also have foreign friends who can't fathom my lack of interest in the game. Every year, every World Cup, I give it a shot and though I identify with my nation, enjoy the spectacle, and can appreciate the fervor, it never resonates.

If I may quote Stripes:

Recruiter: Now, are either of you homosexuals?
John Winger: [John and Russell look at each other] You mean, like, flaming, or...
Recruiter: Well, it's a standard question we have to ask.
Russell Ziskey: No, we're not homosexual, but we are *willing to learn*.

If you want to give it a shot, here's the background. 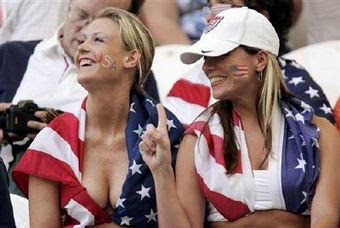