Look, we all get it deep down at some level regardless of political affiliations. A country that falls into drug trafficking induced choas can't be all that great. Predictably, the nation that generally sucks at being a serious country, spawns people that suck at being soccer fans. We saw a hint of this phenomenon when Mexican fans chanted Osama!! Osama!! during the U.S. vs. Mexico Olympic qualifier in 2007. The lack of Mexican sportsmanship was further confirmed when prostitutes murdered two of Mexico's rising midget wrestling stars. May Laparkita or "Little Death" and his faithful tag team partner Espectrito, Jr. rest in peace.

However, in an act of unbelievable one-upmanship from the country that brought you swine flu, chupacabras, and the precursor to ultimate faggotry, the boy band with the rise of Menudo, I offer you the following without much further comment.

The man with the tri-colored mohawk took a swig of beer, stuck his fingers down his throat and vomited the mixture back into his cup. In the next seat another man, who was wearing a T-shirt with a cartoon drawing of the decapitated heads of Barack Obama and Landon Donovan, poured out what remained of the Corona beer he had been chugging and urinated into his cardboard drinks container.

Then, according to a neutral bystander who witnessed these disgusting acts, the pair stood on their seats, high-fived and hurled their vile concoctions in the direction of Donovan, the United States men’s national team star who was preparing to take a corner kick 15 yards away.

Nice imagery. But probably a fitting sidelight to how the actual match went inside the lines at Azteca. You stay classy Jose. Thanks for showing Tri Color's true colors. 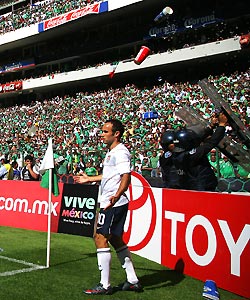