As we approach the start of the 2009 season, I'm using my adjusted stats data to take a look back at the 2008 squad. Most of the stats will simply reinforce what we already know given that we follow this team closely throughout the year. There's a lot of information to look at, so I'll start today with the offensive side of the ball. Note that there may be slight disagreements with NCAA rankings, even in the unadjusted rankings, because I do not use games against FCS opponents in the calculations.

So why did the scoring total outperform the yardage? There are a few ways that can happen, of course, including special teams returns, conversion efficiency, and turnover prevention. Of course the defense assists in this regard, but I will leave their contributions to the defense discussion. Special teams returns, unfortunately, were not an overall contributing factor for Texas in 2008. While there were a couple of big returns from Jordan Shipley in the two biggest games of the year, overall Texas was 69th in adjusted punt returns and 41st in adjusted kickoff returns. Where Texas made up ground on the yardage totals was in efficiency and turnovers. The Longhorns led the nation in raw 3rd down and 4th down conversion percentages and were 1st and 8th in those two stats when adjusted. Red zone conversion percentage was 16th in the raw statistic but 7th after adjustment. This made Texas the only team to rank in the Top 10 of all three categories and only Texas Tech was in the Top 20 in all three. The Longhorns were also in the Top 10 in nearly every offensive turnover metric available both raw and adjusted; the only exception was raw interceptions thrown per game. In all adjusted turnover stats the performance was even better as Texas ranked as an obvious Top 5 team in not turning the ball over. 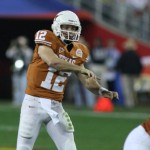 Put a Top 10 yardage eating offense together with the best conversion rate and a Top 5 turnover rate and it's obvious why Texas fielded the 4th best scoring team in the country last year. And while it can be dangerous to assume that a team will remain near the extreme in turnover and conversion stats as pointed out by Trips Right and tangentially by ChrisApplewhite, it seems reasonable to think that Texas' success last year in these two areas was very much because of Colt McCoy's extreme accuracy and consistently high completion percentage. While completion percentage is highly overrated as a statistic overall, it seems as though its benefit over the long term would be most likely to be in conversion rate success, if anywhere. 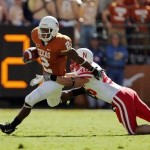 Let's just get this over with as quickly as possible. In 2008 the Texas offense ranked 36th in the nation in rushing yards per game. The reason it didn't seem quite that good, though, can be seen when adjusting for competition and moving sacks out of rushing totals and to passing totals. With that done (it's not shown on the team stat pages yet), Texas ranked 53rd in the country in what I call total rushing yards per carry. The good news, as you probably guessed based on the overall numbers, is that the Longhorns did not fumble the ball very often, ranking 14th in fewest fumbles per carry and 12th in the adjusted stat. And whereas you expect 50% of your fumbles to be lost - 50.23% of fumbles were lost last season - Texas was able to recover 10 of their 16. 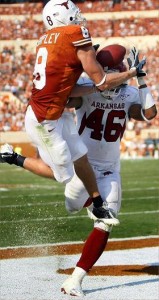 We all know this is where Texas' offensive bread was buttered in 2008. The completely pedestrian running game made it imperative to execute in the passing game and Colt McCoy did that extremely well all year long. Texas averaged 8.53 total passing yards per play, good for national ranking of 5th. Combined with the 4th lowest adjusted interceptions per attempt and high conversion rates the Longhorns finished #2 nationally in adjusted pass efficiency. The only less than bright spot was again attributable to the guys up front, unfortunately, as Texas ranked just 53rd best in times sacked per pass attempt, adjusted, despite McCoy's scrambling efforts.

The good news for Texas fans is that most of the pieces are back again for the offense to continue its production. And while it can be frustrating to watch Texas try to run the ball, when it comes to scoring points it is more important to be able to throw the ball than run the ball. If you're going to be a Top 5 offense in one phase and only average in the other, the Longhorns are doing it the right way. It's not so much that the running game is only mediocre, it's more about when we decide to force the running game at inappropriate times. Let Colt lead the way again. It's not like we've got much of a choice, anyway.

A quick look at all of the Longhorn adjusted special teams numbers from last year. It was mentioned above that Texas finished 69th and 41st in punt and kickoff returns, respectively. The better news is that the rugby kick is completely awesome. Unless you're not satisfied with a #3 national ranking in net punting average. An important area for improvement, though, is our kickoff coverage. Despite being 19th in the country in kickoff touchback percentage (I didn't believe it either, but it's true), the Longhorns were only 42nd in net kickoff average. With a 42.82 adjusted net kickoff number, that means we allow an average kickoff return opponent to start on their 27-yard line each drive. This despite the fact that 24% of our kickoffs were touchbacks last season. Extending that out, that means when we didn't get a touchback off a kickoff we allowed an average drive start at the 29-and-a-half-yard line.