Looking at Texas' defense last year is a good example of why it's important to use adjusted stats instead of relying only on the raw stats reported by the NCAA, which also include games against FCS teams. When adjusted for competition, the Longhorns were #4 in the nation in points allowed per game and #5 in points allowed per possession. Given the competition faced throughout the year, the adjusted stats being better than the raw stats will be a consistent theme for the 2008 Texas defense. The Longhorns ranked 56th in the country in yards allowed per play but that ranking shot up to #16 after running the adjustment calculations.

We discussed some of the possible explanations for yardage rankings varying from points rankings in the previous lookback at the offense. Just as the defense helped the offense in this regard, the reverse was obviously true as well. But unlike the offense helping itself out by not turning the ball over, the defense did not help itself in the turnover game. The defense actually finished #10 nationally in adjusted fumbles forced per carry but were able to recover only 10 of the 25 fumbles they caused. The real problem, of course, was the incredibly low 6 interceptions for the season. Texas finished dead last in the nation in interceptions per pass attempt faced and that number "improved" to only 115th out of the 120 teams when adjusted. Just like the offense, though, the conversion performance by the defense was excellent as the Longhorns joined California as the only two teams to rank in the Top 20 in all three categories - 3rd down, 4th down, and red zone scoring percentages allowed. In fact, combined with the offense's conversion success, Texas ranked in the Top 15 of all adjusted conversion categories both offensively and defensively. No other team finished better than #50 in each category (TCU's worst ranking was 50th in 3rd down percentage allowed). That is a truly remarkable performance for the season. From the defense's point of view it might not be reasonable to assume continued success in the conversion game like last year, but any worsening there would likely be countered by improvement in the number of interceptions fielded. 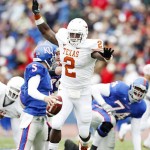 So while people who depend solely on total yardage stats from the NCAA will tell you that Texas wasn't even a Top 50 defense, the truth is that the Longhorns were a Top 20 yardage defense and a Top 5 scoring defense when you adjust for competition. That is an amazing improvement in Muschamp's first year, and as noted in a previous post, the defensive scoring improvement was the second greatest year-to-year improvement in the history of the program. Only Darrell Royal's first year after taking over for Ed Price surpasses it. With even an average performance in 2009 in turnovers forced, there is room for an even greater season for the Longhorn defense this year. 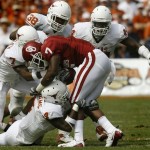 In perhaps the only case of statistical adjustment lowering a Texas team ranking, the rushing defense was not as stout as the #3 NCAA ranking in rushing yards allowed per game would indicate. Being comfortably ahead in most games will limit the rushing attempts of other teams, and Texas' opponents were tilted toward passing production anyway. The other important step is to move sack totals from rushing to passing stats. That left the 2008 Texas defense with a #52 national ranking in total rushing yards allowed per carry. This is more in line with what we saw on the field from the Longhorns in 2008 and goes a long way toward explaining the 200+ yards rushing allowed against Ohio State in the Fiesta Bowl. As noted above, though, while the yardage allowed was only mediocre the Longhorns were very effective at forcing fumbles yet somewhat unfortunate in only being able to recover 10 of 25 when 12 or 13 recoveries would be expected. 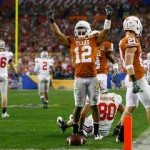 The reverse is true for the passing defense and all the appropriate adjustments bring into focus the fantastic 2008 performance in this phase of the game and the effect is drastic. According to the NCAA, Texas was the 104th best pass defense in the country as tabulated in passing yards allowed per game. The #59 ranking in pass efficiency defense looks a little better but still isn't close to telling the story. The Longhorns' schedule was full of fantastic passing offenses and when competition is adjusted for, the result is a #12 national ranking in adjusted pass efficiency defense. Even more impressively, when you also move sacks from rushing totals to passing totals, the 2008 Texas defense was an outstanding #6 in the country in total passing yards allowed per attempt. As we would have guessed from watching the season unfold, the pass defense was bolstered by a great pass rush. In fact, the Longhorns were 2nd in the nation in adjusted sacks per pass attempt faced. That ranking makes the terrible interceptions totals even harder to understand and makes it almost certain that the defense should pick off more passes in 2009.

Orakpo and Miller are huge losses on the line and their impact will be sorely missed. However, the defensive backfield should be absolutely ridiculous this year and the year of experience and work together in practice and games should enable a comfort level that allows the players to play more instinctively, hopefully leading to a large improvement in interceptions. The linebacking corps also has a year under its belt and the back 7 improvement should be more than enough, combined with improved turnover production, to yield an improved 2009 performance.