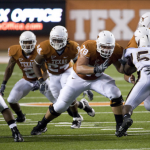 Last year's Wyoming defense was actually pretty decent and showed well against the run, ranking 40th in total rushing yards allowed per carry. Considering that last week the Longhorns averaged 4.47 total rushing yards per carry against a Warhawks team that finished dead last in that same stat last season, the run game needs to show some improvement this week in the final tuneup before Big 12 play starts. The Cowboys gave up 99 yards on 19 carries to Weber State last week (after removing sacks), so another week of 3-4 yard runs over and over should confirm that our run game concerns are once again well-founded. I'll be interested to see how Davis and company utilize DJ Monroe this week as a road game against a weaker opponent is a perfect opportunity to see what he can really give us from scrimmage. 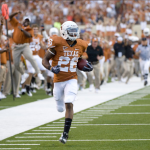 Monroe's lightning-quick touchdown return last week was a breath of fresh air for a Longhorn program that should theoretically see a lot more of that kind of thing with the athletes on the team year in and year out. So what is the outlook for this week? Well, Wyoming finished 116th and 113th in the nation last year in net punting average and net kickoff average, respectively. Things didn't start much better last week as the Cowboys gave up over 12 yards on average on three Weber State punt returns. The kickoff coverage was slightly better as the average there was a little over 23 yards per return. Given the altitude, though, 3 out of Wyoming's 7 kickoffs resulted in touchbacks. With the Texas athletic advantage and the struggles here for Wyoming, be on the lookout for another big play from the Longhorn return teams. 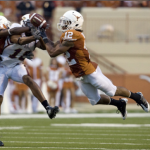 Unlike last week, when Texas faced a team that had protected the ball well in 2008, this week the Longhorns will play a Cowboy unit that was the worst in the country at throwing interceptions last year in adjusted picks per attempt. The overall turnover number was only slightly better as Wyoming finished 118th when fumbles lost were added to the mix. Against Weber State they did fumble twice, losing one, but the Benjamin/Carta-Samuels QB rotation threw no interceptions in 32 pass attempts. Last week the Longhorns picked off a pass but had at least two more decent shots at interceptions fall incomplete. The three turnovers overall were a good start regardless of Louisiana-Monroe's sloppiness.

What will you be looking for on Saturday?