Share All sharing options for: Vince Young the Natural

"History died cruelly, unusually, extinguished by a killer who didn't even lose his breath. Shortly after 11 p.m. Wednesday, Vince Young sprinted across the wet Rose Bowl grass as if skating.

There was no apparent sound. There was no visible sweat. He did not howl. He did not holler. He crossed the faded white line, ran through the soggy red paint, and disappeared into a crowd in front of the stands as the referee threw up his arms. In the distance, there was a roaring crowd and a blaring band. But at the precise spot and exact moment it all ended for the USC Trojans, there was nothing. The loudest college football era in Los Angeles' history had died in silence." — Bill Plaschke, Los Angeles Times

And that was it in a nut shell. Doing the equivalent of striking out the Whammer on three straight pitches as what remained of the carnival patrons looked on. When Vince Young crossed the goal line on 4th and 5 from the 8 to single-handedly resurrect a once proud college football program and knock off perhaps its greatest, you would have been an abject fool to even think that would be the pinnacle of the young man's career.

Surely he'd go on to be a pro football great and redefine the stodgy drop back passing professional league with his electrifying athleticism and street tough leadership. After all, he just stared down the Whammer and blew 3 fastballs right by him.

Not So Humble Beginnings.
Unlike Redford's character in the Natural, Vince didn't come out of nowhere from some podunk farm lost in a flyover state. He came from inner city Houston, notorious for drugs, gang violence, and lack of hope in general. And Vince didn't happen into our sports lives via some half drunk washed up scout ala Roy Hobbs. Instead, the instant he grabbed a football as a sophomore at Madison High School, Young proceeded to steal our collective breath, electrify the local community, while captivating the college football world years before he even stepped foot on a college campus. He did things on a football field from the quarterback position no one had ever seen before. Running through good high school defenses like North Shore and Westlake. Counting coup with dizzying moves on the lesser lights in the area, using his stiff arm hand as a coup stick. And generally embarrassing as good a brand of high school football as you'll find anywhere in the world.

My fondest memory of VY wasn't Westlake or North Shore or any game in between. It was a ho hum game against lowly Sharpstown. It was a game that turned out to be foreshadowing of points in his college and pro career because evidently Vince was instructed not run. Why do I type he was instructed not to run? Well, because he didn't. Vince always runs. Unless he's told not to. Instead he dropped back to pass time after time, completing something like 15 for 16 in the first half with perhaps 180 yards passing. There was a buzz in the crowd. Wow. This kid can pass too?! Sure he can. Like Joe f'n Montana.

On one particular pass, which had to be a 15 yard out to the field side, Vince throws an absolute pea to some poor kid who's probably driving a truck for UPS as we speak. The kid goes to one knee, catches the pass, and after he gets up and tosses the ball to the ref, he motions to Vince Young to get the ball in the air a bit more. "You know, so I can make a play, Vince. Instead of throwing it in a 3 ft window, I'm gonna need it in a six inch window. Like you always do, bro." The hilarity of the situation stemmed from the lack of perspective this kid had for typical high school QB play. It sealed the deal, for me, and a bunch of folks in terms of Vince Young being an otherworldly player. This was a different cat. This wasn't Shea Morenz, Odell James, or even Chris Simms. This dude was different. He was an alien. And whatever your school affiliation, your team simply had to have him because he was special. He was Michael Jordan in cleats. 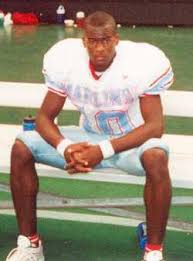 The College Years.
Let's fast forward through Vince's time at Texas. If you don't understand a term or reference, then ask someone. Brewster works his magic, Young foreshadows his own greatness with "I'm on another level dog", Vince Young punches Eric Jackson, gets shut out by OU, converts 4th and 18 to beat Kansas, wins a Rose Bowl and wins its MVP, says we'll be back, tells the steroid triplets y'all hittin' out there baby, gets crunk in the Cotton Bowl, tells the media they don't know we're gangsta, caps off 3000 and 1000 season like Ted Williams hitting over .400, big 4th and 8 run, tells Colt this is his last play at Texas and that he's handing the keys of the car over to McCoy just before converting the two point conversion, wins the Rose Bowl, a national championship, another MVP, says the crystal is beautiful, asks us if we think it's beautiful, tells us where the crystal is going and then goes pro. Now, press play...

In the movie The Natural, Roy Hobbs, our hero, is derailed twice during his career by forces seemingly beyond his control. Remember how Barbara Hershey notices Roy Hobbs greatness after he strikes out the Whammer on 3 pitches, mainly because she's been stalking the Whammer? In a perfect world and to perfect the analogy, Kim Kardasian would have left Reggie Bush for VY just after the Rose Bowl and then proceeded to give Vince the clap. A severe enough case of the drip to really fuck up his career. But that didn't happen. So we'll skip Barbara Hershey altogether unless you really want to go after Greg Davis. But I'm guessing the true culprits of VY's sudden demise are hanger's on, Jeff Fisher, and VY's own melon. Entourages, overly conservative coaches, and self doubt have a way of making otherwise heroic m'fers look ordinary.

Entourages Can Be a Bitch

And this astounding triumvirate of misfortune has threatened to force VY to fall off the face of the pro football world after a rookie pro bowl year and a surprising second year playoff run. In that context, watching him try to ward off a third string quarterback from a directional school, and struggle in preseason vs. second and third string JAGS is among the most painful things I've had to endure as a fan.

My question is who's responsible for the Kim Bassinger-esque poison pill the night before the big game? Is it Young's entourage? Is it VY himself? Perhaps Jeff Fisher is just a horrible fit as a head coach for the would be star. Maybe it's the combination of the three that has landed VY's career in a hospital bed when he should be knocking the cover off the ball in game seven of a world series game with the New York Knights. Whatever the case may be, something is going on and it's significantly detrimental to this Wonderboy's professional career. If I'm Mack Brown I call up Young and tell him, "You're the best I ever had. And you're the best goddamn quarterback I ever saw."

Vince Young has obviously broke his famous bat. Get your shit together partner and pick me out a winner, Bobby. Rumble YOUNG man. Rumble.