Two losses last week dropped Texas out of the #1 spot in the college basketball polls, but the Horns stayed among the Top 6 in both polls.

Kentucky, Kansas, Villanova, Syracuse and Michigan State hold the top 5 spots in both the AP and the ESPN/USA Today collegiate polls. Texas is 6th .

Kansas State is 11th in the AP, 13th in the ESPN/USA poll, while Connecticut moved up to 19th in both polls with its Saturday win over Texas. 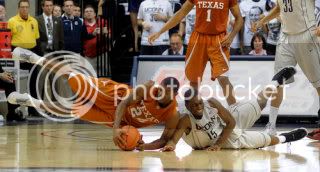 Connecticut's win over Texas drew the 2nd highest tv rating of the season for CBS.

CBS pulled a 1.8 rating for the Saturday afternoon game, second to the Kansas-Tennessee game earlier this season, which followed a NFL playoff contest.