Share All sharing options for: Texas Turns the Page

Well, WTF was that? A train wreck is what. That’s how the entire Texas basketball season can be described.

A screaming, screeching, ugly train wreck.  After ascending to #1 in the nation for the first time in school history, the wheels just fell off during conference play.  You can read all about the final and quite fitting end to our season in Trips’ always insightful post-mortem.  I’m just happy that Trips is still alive after the heartbreak of last night and the pantsing that UTEP took yesterday.

“Where do we go from here?” Alicia Keys once opined.  What do we do after the party has mercifully ended?  (Rebuild) What will this train wreck look like next year?  (Small) Could it get any worse? (It could).  So much of next year is dependent on who’s coming back.  We know that Plexy Dexy will take his game to some non-descript European league or maybe the D-league.  Mase will most likely move in with Rick Barnes so that Rick doesn’t suffer from detachment issues and Damion will be in The League somewhere making us proud.

Where do we go from here?  How about back to your place, Alicia?

Basically, we need to know what happens with 3 key contributors—the three freshman.  The rest of the team are role players and honestly, if Matt Hill fell down in the woods, would anyone hear him?  So let's go ahead and do what internet blogs do, give uninformed predictions of each’s possible return:

Avery was the #1 recruit in the land coming into the land and that moniker and talent still goes towards building his draft status.  He’s quick, plays both ends of the court, is tough minded and has displayed the beginnings of leadership qualities.  He has a nice mid range game and has very nice form on his jump shot.  He should be able to extend his range with a little more strength.

On the bad end, he doesn’t have a definitive position.  His ball handling is too deficient for a PG, not to mention he doesn’t have a PG feel for the game, yet his size is small for a 2 guard.  He has problems finishing at the rim because a lack of upper body strength and too easily gets the ball ripped from him in the lane.  In short, he's not really ready for the NBA right now.  He either needs to get a handle and be an offensive PG, like a Monta Ellis or George Hill type or gain some strength to allow him to finish more effectively at the rim while extending his jump shot and be a solid, if undersized, off guard.

Of course, none of that really matters; it’s all about the flow.  If AB can get into the top 15 to 18 picks, as some are slotting him now, then he needs to go and get paid.  Especially with a NBA work stoppage on the possible horizon.  If he can’t, then he needs to seriously consider coming back and working on his game.   I think you see a ton of under classmen declare.  Also, some have speculated that Avery may want to just get out of Austin and away from Colonel Klink’s offensive unimagination (yes, I know that's not a word).  I haven’t seen or read anything that would suggest that Bradley is miserable, but that’s what the comments section is for.

This is probably the easiest of the three.  He needs to come back.  Case closed.  JCB is a four year player.  JCB has a very fun and crafty offensive repertoire that’s fun to watch if you’ve ever played where you’re not the most athletic person on the floor.  A cadre of floaters, teardrops and scoop shots allow JCB to get his shot up at times over bigger and more athletic defenders.  He also has nice court vision and a good feel for when and how a play will develop.

Still, he’s painfully slow for a guard.  His jump shot brings images of Monique’s unshaven legs.  He can't play defense, doesn't always exert maximum effort, and doesn't have the decision making ability to take advantage of his court vision yet.  He's a work in progress and he needs to keep pounding marble.

JCB came in with a reputation for immaturity and emotional explosiveness, so rumors abound if he’s happy with the tough and sometimes confusing love that Barnes imparts on him.  Could this cause JCB to declare for the draft?  Transfer?  Anything can happen when you’re trying to break down the psyche of a 20 year old, but I doubt it.  Like Richard Gere, he has nowhere else to go.  It’s been well documented about how long and hard the road was to get JCB to Texas and qualified and both Barnes and JCB expended a ton of effort and time to make that happen.  I don’t think they turn the page so easily. 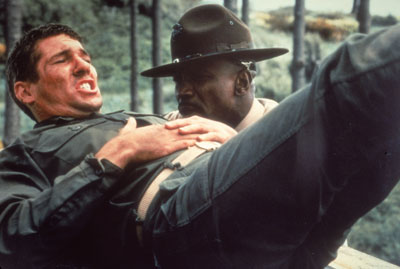 Don't you do it, Rick.  J'Covan's got nowhere else to go!

Has there ever been a more enigmatic or frustrating player to come to Texas than Jordan Hamilton.  Probably the player with the most pure talent on this Texas team, Jordan is the proverbial 1 million talent with a 10 cent head.  I do think that Jordan has really improved this year, specifically in the last half of the year.  Jordan became more patient and less apt to throw up a three every time he touched the ball.  Jordan has exceptional range on his jump shot , displays a keen passing eye, and can rebound and penetrate at times.  He also has a solid handle for his size which makes him valuable in breaking a press or even initiating offense in a pinch.

On the flip side, Jordan has displayed no midrange game.  Like most kids in America today, it’s get as close to the rim as you possibly can or shoot the three.  The few times he tried to post up, he settled for unsuccessful fadeaways.  He’s a terrible defender, although his effort improved on that end of the court throughout the season, but that’s like saying Gary Coleman got a little taller.  He’s still has almost no court awareness and, like JCB, lacks foot speed to keep other wings in front of him and out of the lane.  He’ll most likely never be even a good defender, but if he could upgrade to simply below average then he’d be fine.  His offense is his calling card.

Coming into the season, rumors were that Jordan was the most vocal about wanting to jump to the NBA and his father is known to hold Jordan in a tad higher regard than reality.  Got to love supportive parents, I guess.  From what I’ve seen, Jordan’s draft prospects are all over the place but mostly I’ve seen his name in the 2nd round.  A couple of mocks have him sneaking into the bottom of the first.  Could his NBA itch be too much not to scratch?  He’s already stated he’s coming back, but it’s early.  I think Jordan will explore his options and then begrudgingly come back to the be the focal point of the offense next year.

What you talking about, Jordan?  Not defense.

If percents hold, then our starting lineup would look something like this:  Tristan Thompson, Gary, Jordan, Varez, and JCB with Shawn Williams, Alexei, Hill, Jai, and Chappy off the bench.  I didn’t list Dogus, because I don’t know if he’ll 1. Be healthy enough to come back and 2. Decide to go back overseas.  I think Dogus may understand that his lack of a 15 foot jump shot would handicap his ability to make a NBA roster.  He’s in flux.  Wild card would be a Cory Joseph signing and if he would ever make it to campus.  Let’s not get ahead of ourselves.  That type of squad, while not having the talent that this year’s edition had, may be a better fit playing together in a more up tempo type of game, but that is an article for another day.  Thoughts?