Share All sharing options for: Assessing the BCS Landscape -- Week 2

Opening thought... what the hell is going on with FBS teams losing to FCS underdogs in 2010? After KU and Ole Miss embarrassed themselves in week 1, we saw FOUR more losses by FBS teams to FCS in Week 2: Minnesota, Akron, Ball State and Virginia Tech.

The last loss in particular is earth-shattering and has major NC implications. More on that in a minute.

2008 All Over Again? -- It’s incredibly early, but the Big XII is highly outperforming expectations in out-of-conference games, and the soon-to-be-downsized league is now at the top of the conference standings. The Big XII's conference strength is fueling projected SOS for Oklahoma (#2 overall SOS right now), Texas (#7 SOS) and Nebraska (#16).

Oklahoma in particular is in prime shape if they win out, given a well-rounded schedule and marquee games against Texas and potentially Nebraska. Texas is not as strong as Oklahoma, but like OU, Texas still benefits from the fact that the Big XII South has been starting strong.

The SEC teams are slightly behind the Big XII in technical numbers, but human perception of the SEC will probably trump the Big XII when push comes to shove. Bama's solid pounding of PSU adds validation to the SEC's perceived strength. If current trends continue, we could see a third consecutive season where the SEC and Big XII seem on a path of destiny to meet in the national title game.

But What About Ohio State? -- Given their solid #2 ranking in the human polls, an undefeated Ohio State would seem a default choice to play the SEC winner, but clearly that conflicts with what I just said about the Big XII. How exactly is this going to get resolved? Obviously, a lot of football remains to be played, and these BCS nightmares often get solved on their own. But if I’m a Buckeye fan, I should be a little alarmed that Ohio State’s SOS ranks 73rd (out of 120 FBS teams) after two weeks of action. Consider:

The only saving grace to Ohio State might be the way they finish the year, with big games against Iowa and Michigan. If Ohio State wants to ensure they don’t get leapfrogged by an undefeated Big XII team as the year plays out, they should want the Hawkeyes and Wolverines to come into those games as strong as possible.

If Ohio State, the SEC winner, and the BigXII winner all go undefeated, we could have a real mess on our hands in early December. 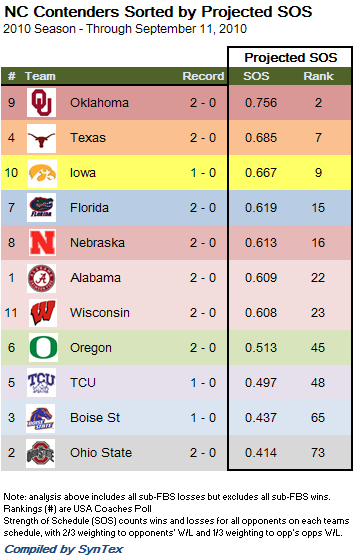 Buh-Bye, Boise State -- There’s really not too much to say about Boise’s devastating setback by virtue of Virginia Tech losing to sub-FBS team James Madison. I believe the VT loss is pretty much a deal killer for Boise, as it clearly takes off almost the entire luster from the Labor Day win. The WAC is generally flailing as expected in out-of-conference games, and I previously postulated Boise would need a perfect storm of VT and Oregon State putting forward highly impressive records.

I suppose we can put Boise back in the running if VT rallies to win the ACC and go 10-2, but absent that kind of miracle, I believe Boise is now a long shot for the national title game, even though they could very well stay entrenched at a #3 or #4 ranking in the human polls for the rest of the year. Boise’s only hope is if the stronger conferences (Big XII, SEC, Big10) all have two losses and the weaker conferences (ACC, Pac10) all have one loss. An undefeated Boise is highly likely to get an automatic berth as an at large, however.

Thoughts on Other Contenders -- No need to get too granular being so early in the year, but Iowa and Wisconsin can make strong moves if they win out. Oregon has quickly moved up to a #6 ranking in the coaches poll, but the Pac10 has had a lukewarm start to the year… they will be an interesting team to keep an eye on. TCU still lacks a big game on its schedule outside the victory over Oregon State; although Utah could be a platform game in early November, TCU closes the year with SDSU and New Mexico.