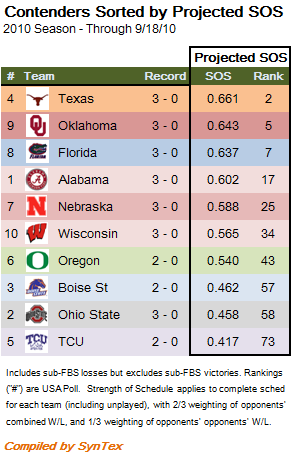 After a rather uneventful weekend of college football (Iowa’s loss to Arizona is probably the only notable upset, effectively eliminating the Hawkeyes from national title contention), Ohio State fans should start to be getting concerned about their resume.

The Buckeyes rank very near the bottom among top 10 contenders in terms of their projected strength of schedule.

Why is this happening? It is not really the fault of their conference, as the Big 10 has a solid third place position among the eleven conferences (0.760 winning percentage OOC). Unfortunately, Ohio State manages to have the very worst projected SOS among the eleven teams in the Big 10.

Ohio State’s OOC schedule is certainly not helping. Marshall and Eastern Michigan are both 0-3 (and the latter may well lose their next nine, if previous seasons are any indication). Ohio has yet to beat an FBS foe. Even the “marquee” win against Miami (FL) is inflicting some collateral damage to Ohio State, as the ACC severely lags among the power conferences.

Ohio State’s in-conference slate is also hurting, at least thus far. The Buckeyes will not play undefeated Michigan State or 3-0 Northwestern. And games that previously appeared to have mega-game potential, Iowa and Penn State, are both diminished given early season road losses for the Hawkeyes and Lions. And neither Wisconsin or Michigan has looked impressive enough, thus far, to make it very believable that they will maintain their undefeated records.

Make no mistake: Ohio State is the de facto #2 in the human polls, and that is a powerful edge to have in their corner. But Ohio State should get very nervous if an undefeated Big XII team builds momentum, as an outright jump in the BCS standings is very possible.

TCU is rightfully earning the nation’s respect after posting solid victories over AQ-conference opponents, even if Oregon State and Baylor are not necessarily among the nation’s elite. Unfortunately, TCU’s title chances took a body blow given the Mountain West’s performance out-of-conference this weekend. Wyoming, Air Force, SDSU, CSU, BYU, and UNLV all lost their OOC games. Ouch. The Mountain West was an impressively strong conference in 2009, but they now rank 9th out of 11 conferences so far this year.

I think TCU is a near-lock to get an at-large BCS bid if they continue to win so impressively, but they remain a long shot to get to the championship game.

Conversely, the Mountain West’s loss is Boise’s gain. Boise dominated Wyoming and Idaho clobbered UNLV to make an impressive statement on the MWC vs. WAC debate. Even more amazing was Nevada’s stomping of Cal, giving the WAC some credibility as they now clock in at #5 in the conference rankings.

If James Madison hadn’t embarrassed Virginia Tech (and East Carolina gave the Hokies everything they could handle as well), Boise really could be making things interesting. But in the meantime, Boise has little chance to go to the NC game. Give every major AQ conference team a loss, and it’s worth revisiting (but still unlikely).

It may not always be pretty (A&M over FIU, Missouri over SDSU, OU over AF), but the Big XII has really put together a strong start out of the gate, and the window for differentiation among the conferences is closing fast as we head to conference play. The Big XII is ready to book these gains. Check please?

The Big XII’s winning percentage is slightly behind the SEC, but the Big XII has also posted far more victories over FBS teams than the SEC. These victories in September are really going to help the team that emerges from the Texas, Oklahoma and Nebraska trifecta. Bear in mind, my team rankings for SOS have yet to factor in a conference title game boost as well. Bottom line, the Big XII contenders couldn’t have asked for a better start to the season.

Believe it or not, Texas (on paper) now holds the second strongest schedule in the country. Even a game that looked doomed to be a loss turned into a major coup, as UCLA upset undefeated (and ranked) UH. Let’s face it, Texas’ OOC opponents are precarious and will be lucky to win week-by-week, but Texas is getting major benefits from the strength of its conference.

In a couple more weeks, as more season/data gets put in the books, we can start taking a closer look at the computers and BCS rankings. It's always risky to make projections so early in the year, but right now this still smells like an SEC vs. Big XII NC race. Ohio State and Oregon fans may object, but right now, the numbers don't lie.